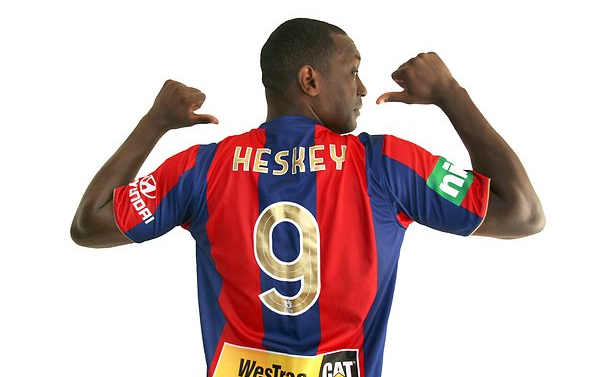 We may be only a month and five rounds into the 2012/13 Hyundai A-League season but already the three big offseason marquee signings – Emile Heskey, Alessandro Del Piero and Shinji Ono – have settled in well.  With seven goals between them after four games, Heskey and Del Piero initially found their feet quickly; while Ono contributed to a strong start from the Western Sydney Wanderers which included the club’s first ever win against reigning champions Brisbane Roar.

Ono’s Wanderers picked up another win at the weekend against Melbourne Heart, but Heskey was held goalless by Perth Gory and Del Piero missed Sydney FC’s embarrassing 7-2 defeat to the Central Coast Mariners with a hamstring strain.  Heskey did manage an assist for Newcastle against Perth with a knockdown that allowed Josh Mitchell to equalise and make the score two goals apiece, however Glory youngster Chris Harold netted an 85th minute winner for his side.

The pre-game buzz in Perth was all about Heskey, with news agencies that rarely give football the time of day sending camera crews and journalists to the Jets’ light training session on Friday morning.  With the former England man in such high demand from the media, requests for a one to one interview were declined by the Jets but the player was more than happy to take questions for the assembled group, even if one had to ask him how to pronounce his first name.

Heskey spoke fondly about his experiences so far, and has been impressed with the condition of his teammates;

Fitness levels, especially in this weather, are very high. That’s one of the surprises, and they’ve warned me that it’s going to get hotter!

The move to Australia came as a shock to many, though Heskey put a lot of thought into taking his young family to the other side of the world and sought advice from some friends within the game.

I spoke to Robbie Fowler, I spoke to Dwight (Yorke), I spoke to Bridgey (Michael Bridges) who is obviously out here with me, and everyone loved it.

Former Leeds United and Sunderland man Bridges has been in Australia since 2009, initially joining the Jets on a six month contract before setting up camp long term. As well as still being on the Jets’ books as a player, Bridges does a lot of publicity work for the club and has done his bit to talk up the Heskey acquisition, even calling for an England recall.

I feel Emile could certainly still offer something for his country again were the chance to arise. He’s done many good things for England in the past and people who understand the game acknowledge that. As for playing for England again, personally I would say why not?

While that idea might be more than just a little farfetched, Heskey looks in great shape, unlike some of the other big name strikers such as Romario, Mario Jardel and Brian Deane who have also graced the A-League.

He comes across as extremely professional and focused, which is good news for the club who have forked out a reported $1 million to contract him for this season with the view to an extension come April 2013.  The Jets also made sure to target youth with their recruitment this year, and promising players like Craig Goodwin (the October Young Player of the Year nominee) and Adam Taggart (an underage international) can only learn from a man who played on the biggest stage of world football.

There are some good young lads here and they’ve got bright futures. So long as they keep working hard and keep listening to the manager they’ll do well.

Those youngsters can sit down with a pen and paper and a recording of Fox Sports’ Hero Cam which was fixed on Heskey for the recent game against Melbourne Victory. He bagged a brace in that game, including an overhead kick, but by his own admission wasn’t really sure what was going on with the whole thing.

I actually didn’t know (about Hero Cam) until someone actually said it to me. They pointed it out and there were a few jokes made.

There were a few more fingers pointed in ridicule at NIB Stadium on Saturday night when he missed a sitter from six yards out, leading to chants of “What a waste of money” and “If Heskey played for England so can I”.  Long after the final whistle though, there was a crowd of about 100 people outside the ground waiting for Heskey to come out and sign autographs.  After any other game you would be lucky to see a quarter of that.

I hope to help the A-League by coming over here. Not just myself, but Del Piero and Ono coming over and bringing some light into a good, competitive league.

This article first appeared on the excellent InBedWithMaradona. Get their recently launched book “The First Two Years” here.

One thought on “Heskeymania and an England recall?”