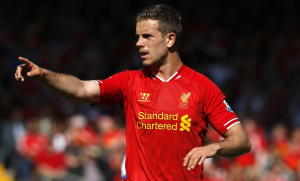 Can the functional be romantic?

Jordan Henderson is perpetual motion in the most economically aggressive way. And while his offensive game continues to evolve in the almost weekly fashion peculiar to the young stars of Brendan Rodgers’ Liverpool, he still isn’t a classically romantic or engrossing figure, by the sport’s (and my own) established standards.

He’s all limbs; moving like a crab that, after countless hours of solemn dedication, taught itself to run forward. He presses and he presses and he presses and then, in the 94th minute of a game in which his intensity never dipped below Nick Cage level, he’s harassing your full-back at half-way with every follicle of his perma-gelled, mouth-gaping head present and correct. There’s something absurdly serene in his constant movement these days. The thrumming of an engine on a journey home.

He’s added a crucial dynamism to his game in recent months, which has to exist if he’s to elevate himself above the benign ‘water-carrier’ association. It’s a term which Henderson himself seems to be rendering archaic. As if he’s evolving the footballing nomenclature with every surge beyond the line.

Of course there have been all-action, box-to-box midfielders before – Henderson’s regular midfield partner was one of the league’s most celebrated – but Gerrard was never so disciplined and tactically astute without the ball. Henderson is an ultra-modern midfielder – comfortable and adaptable across numerous formations and systems. He’s a water-carrier only in the sense that he’s the one putting out Liverpool’s fires.

It’s well known now that Rodgers had been willing to let Henderson head south to Fulham in the manager’s first season in charge. A combination of the player’s confidence, ambition and pride saved Liverpool a tragedy which is now difficult to envisage. If that seems a little hyperbolic or dramatic, and it probably does, then consider this from Rodgers on the late collapse of Liverpool’s title surge last season (taken from Make Us Dream, by Neil Atkinson & John Gibbons):

“After the final match of the season against Newcastle at Anfield, Rodgers walked back to his office to be with his family. He was asked when he had known the title had gone. Was it Steven Gerrard’s slip against Chelsea? ‘No, no,’ he said. ‘I knew when Jordan got sent off against Man City. I knew I couldn’t replace him.’”

While I’m not certain I buy the slightly melancholic and rather defeatist sentiment expressed by the Liverpool manager, it does nicely highlight how Rodgers now sees Henderson. Prior to the start of the current season, Rodgers described Philippe Coutinho as ‘the brain’ of his Liverpool team, but if that’s the case, and again I take leave to doubt him, then it does a disservice to Henderson who, it could be reasonably suggested if continuing the metaphor, is the central nervous system; that combination of spine and processing power which is the root of all function and movement. He is the one who most appears to be the manager’s representative on the pitch, and the one in whom the most trust is typically placed.

This latter point is particularly relevant right now, with Liverpool seeking a new vice-captain in the wake of Daniel Agger’s unfulfilled tenure reaching its disappointing end. Henderson currently leaps out as the most obvious, if not only, candidate to fill the role. There does pervade in England a peculiar preoccupation with captaincy (and even vice-captaincy), but here is a situation where the title would indeed be significant, not least in rewarding Henderson for his development and character, but also in helping to further legitimise his position as Gerrard’s heir apparent.

The other pretenders are quite quickly ruled out due to their seniority being rendered moot by glaring deficiencies in either form or suitability. Martin Skrtel, for example, isn’t vocal enough, Glen Johnson still has his systemic uses but has flat-lined performance-wise and Lucas Leiva can scarcely make the squad, let alone the first XI. Henderson’s leadership has grown to be a pillar of this team’s personality.

I began this article by asking whether the functional can be romantic, and, despite my best efforts, I still find it difficult to see past Henderson as the endlessly capable, uber-reliable task manager. But there’s something reassuring in that. In another world, he’s wearing thick-rimmed spectacles and starched white shirt and maintaining servers for an online tech powerhouse.

But why does romance even come into the equation? Well, because ‘The Beautiful Game’ doesn’t belong to the functional. It just doesn’t. It belongs to the dreamers; it belongs to the ones who see the game differently to everybody else; the ones who through some innate gift of understanding (call it genius of a sort) are fluent in the game’s garbled physical language. It’s argued that sport doesn’t qualify as an art form because its rules are too clearly defined and while that’s clearly part of a much wider philosophical debate, the premise is one I agree with for the most part.

Except that the best players – the real cream of any sport – can undeniably be artists. The ones who touch this higher plane. They don’t simply excel at the game on its own terms, they interpret it. They transmit their personality, their thought processes through the manipulation of their bodies and a small leather ball. Jazz musicians in fluorescent boots. The thrill of a split-second execution of imagination, timing, vision and sheer skill is the joy of football. Its sport as self-expression, sport as self-liberation, sport as art.

And therein lies the crux of my personal conflict and the essence of this frantic essay. What is it that draws me to the relentless solidity of Henderson’s game? The answer, I now think, lies somewhere in his humanity. An almost celestial talent like that of Suarez or Messi can often seem so natural, and yet incomprehensible, as to create a vacuum of relatability. We fawn, we admire, we cherish, but we don’t quite understand.

And so it’s refreshing and endearing to see a player who has so obviously benefited from countless hours of repetition and sacrifice and hard work earn the ability to define himself on the field. Henderson’s contrast is a complimentary one, and hugely beneficial to those around him. He’s exciting in what his evolution could allow his team to become. That’s the romance of Jordan Henderson.

Irish student who writes about tactics, positions and players.

3 thoughts on “And here’s to you, Jordan Henderson”