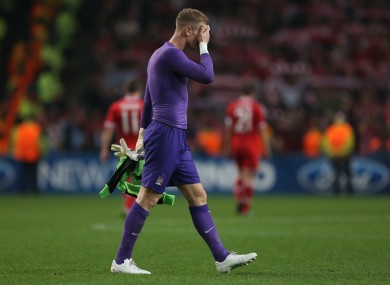 Goalkeepers are a unique breed.

First and foremost, they are the only footballers with a specialised role, i.e. using their hands.

Secondly, the burden they carry with their tactical positioning and decision-making is unrivalled; the goalkeeper, more than any other player, is the figure under most scrutiny.

And, thirdly, it is the loneliest position: isolated from their team-mates, in both training and on the field, goalkeepers are often swallowed up by the 24 x 8ft dimensions of a goal frame.

Joe Hart – who, just 12 months ago, was hailed by many as the best goalkeeper in the world after an astonishing performance in a 0-0 draw against Borussia Dortmund – is now facing a crisis of confidence.

This was the once arrogant man who taunted Andrea Pirlo by unfurling his tongue in the quarter-finals of Euro 2012; tellingly, the majestic Pirlo got his revenge with a sweet panenka.

Yet, now, when Hart has long established himself, the Englishman is facing a crucial 12 months.

Once driven by proving himself – whether it was on loan at Birmingham City, or ousting Shay Given at Manchester City and Robert Green with England – Hart’s concentration has suffered.

The question now is: is it a terminal decline or will Hart bounce back?

Perhaps, such a, potential, goalkeeping fall has never been seen before: the likes of Fabien Barthez, Packie Bonner, David Seaman, and Andoni Zubizarreta were all in the twilight of their careers when mistakes began to creep into their game.

Instead, a more apt example would be that of David James: a goalkeeper who amassed 53 caps in a 13-year international career, from 1997, and the man who holds the all-time appearance record for goalkeepers in the Premier League.

Yet, with James – at a similar age to Hart, when he was at Liverpool – mistakes, and haircuts, began to overshadow the Hollywood saves.

Fumbling, fatally, David Beckham’s corner in the dying minutes of the 1996 FA Cup final was the perfect example.

James never fully recovered and his next FA Cup final, with Aston Villa in 2000, was similarly heartbreaking after another goalkeeping error from Gianfranco Zola’s free-kick.

Yet, James still enjoyed a glittering career and continually bounced back into the England squad under three different managers.

To really put the travails of a goalkeeper into context, then, one has to look at the case of Robert Enke.

Much of Barcelona’s pre-season preparations in 2002 were dominated by speculation of whether it would be the newly-arrived Enke or Roberto Bonano who would be first choice goalkeeper.

The pressure Enke faced was perfect evidence of the difficulty of life as not only a top-level sportsmen, but, also, adapting to the pressures and philosophy of a goalkeeper at Barcelona.

This was a man who had secured a, seemingly, dream move to the Nou Camp after a series of commanding performances as Benfica’s captain under Jupp Heynckes.

Yet, few knew the scale of the panic attacks that Enke endured whenever he made the slightest error.

Remarkably, that was without even addressing the asphyxiating swath of nerves Enke experienced on the field in trying to adapt to the role of sweeper ‘keeper in the cauldron of the Nou Camp.

Enke did recover – so far as going on to resurrect his career and become Germany’s number one in 2007 – but he suffered horrific depression.

The death of his daughter, Lara, was the main trigger but there is no understating just how haunted by goalkeeping errors Enke was.

Some goalkeepers can cope – such as the great Stanley Menzo, with Ajax between 1983 and 1994 – but others cannot.

So, while the scrutiny continues to fall on Hart – amid countless replays of recent mistakes – it is important to remember just what an isolated profession life as a top-level goalkeeper is.