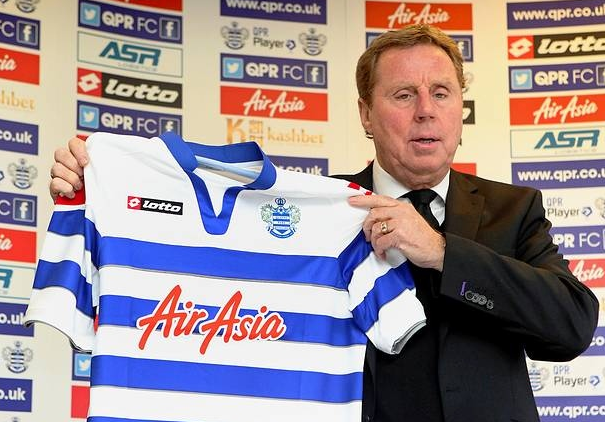 Harry Redknapp, the Permier League’s maverick manager, has now taken control of his first match at the helm of the worst team in England.  A dour nil-nil draw seemed on the cards from the outset but it was definitely a more promising display, albeit against a Sunderland side incapable of scoring.  Redknapp has been a newsworthy manager for the past year, from his decline at Tottenham, to flirting with the England managerial position, and tax evasion.

Then there was all the guess work as to where he would end up next, could it be leading the Ukrainian national side?  Nope.  Old ‘Arry remains in London to try and lead Malaysian entrepreneur Tony Fernandes’ Queens Park Rangers to the global status they so desire in the paths laid out by Manchester City and PSG.  Then perhaps they can fill the new stadium they wish to build with nearly double the capacity of their current 19,000 seat west London home on Loftus Road.

QPR have some big steps to take before they can even get out of the relegation zone, which they narrowly escaped last season.  In the summer, the hoops formerly managed by Mark Hughes, went on quite the spending spree of € 14.5m to bring in Bobby Zamora, Djibril Cisse, Samba Diakite, Nedum Onuoha, Taye Taiwo, and Federico Macheda, with the hopes that this would at least get them a comfortable mid-table finish to build on.  This has not worked and now Redknapp must take over a team where he will be unable to go on a large spending spree reshaping the squad as it has happened too recently to do again.  QPR head into December as the only club in England’s four divisions still looking for a first league victory, thus arguably making them the worst team in England, or at least the largest underperformers.

The first thing Harry Redknapp should have on his agenda is setting a precedent for his starting XI as Mark Hughes was never able to find a rhythm in his team and continued tinkering with the tactics after every loss.  This has likely prevented any team cohesion from forming and judging Redknapp from his first game in charge he has made some smart, obvious, and surprising choices in his team selection. Whether or not he sticks with the XI he picked for his first match remains to be seen, but this is definitely something he will be looking to figure out straight away.  In defense Jose Bosingwa was brought back in at right back while Shaun Derry was dropped to the bench, and in midfield the muscle of Samba Diakite and finesse of Esteban Granero were added.  There was no place in the squad for Kieron Dyer, which was an easy choice, but even more surprisingly there was no place for Alejandro Faurlin either.  Surely the excellent Faurlin will find his way back in soon but on the day Redknapp said his idea was that he wanted a stronger, more athletic midfield with Diakite sitting deep alongside Stephane Mbia, which largely worked.

Sunderland were on the back-foot for most of the game with their best performers being defenders Carlos Cuellar and Danny Rose and relying heavily on excellent play from goalkeeper Mignolet.  Adel Taarabt and Esteban Granero bossed the midfield from their advanced positions and were able to create the most chances of the game for QPR as they were allowed to attack with the protection of Diakite and Mbia behind them.  Both teams lined up in the same 4-2-3-1 but Sunderland were definitely the team lacking in confidence and their home fans got on their backs very quickly, which didn’t help Martin O’Neill’s team at all.  I was surprised to see certain players picked over others in the QPR line-up such as Jamie Mackie over David “Junior” Hoilett or Park Ji-Sung.  Park is coming back from injury, but Hoilett is a rising star in the Premier League while Mackie has had a break out year but has recently been in a slight decline in confidence, although he did put on a good display against Manchester United at the weekend so that may have warranted his inclusion.  Clint Hill was the other player to have a stand out season last year but I can’t see him starting over Anton Ferdinand at the center of defense for much longer.  It should also be time to give the on loan Fabio a go at left back as Armand Traore has been unconvincing this year and for large stretches of his young career.  Those suggestions are not pressing however and other than dropping Faurlin from the squad, there were no shocking or poor decisions from Redknapp’s side and he already looks to have them playing some good football.  They have the ability to create chances, but they are struggling to finish them with both Zamora and Johnson injured, only the out-of-form Cisse is fit to lead the attack and he is not performing well at all.

QPR are a decent side with the ball and have plenty of midfield talent to retain possession and create.  They have the 10th highest average possession in the Premier League, and this has lead them to record the 12th most shots and 13th most shots on target, which are stats that should have them comfortably sitting mid-table as they should be rather than in the basement and this comes down to their finishing.  They’ve scored the joint-fewest goals with Norwich but at the back hasn’t been that much better as they have conceded the 17th most shots in the league, which has them at the second highest number of goals allowed behind Southampton.  The two main problems in the squad are Djibril Cisse as striker and Armand Traore at left back.  Traore has never been too solid defensively but looks decent going forward, but in Hughes’ time he would line up Taarabt or Hoilett in front of Traore and neither of those players track back and tackle (Hoilett makes 1.4 tackles per game, while Taarabt makes 1.1), which leaves the inesperienced left back largely exposed.  When Park Ji-Sung is fully fit again, he would be a good defensive minded winger to play on the left, where he averages 3.6 tackles per game, as well as captain the side once again.  Against Sunderland and for most of the season, QPR’s main creative threats have been Granero and Taarabt and they are both in the league’s top ten players for ‘key passes per game’ but they just aren’t being converted.  The only fit striker Djibril Cisse has scored 1 goal from 24 attempts this season, which is a terrible record.  Perhaps playing with Diakite and Mbia (and possibly Faurlin in the future) as holding midfielders can allow more attacking players to play up front such as Hoilett, Mackie, or even Wright-Phillips as goals are going to have to come from the midfield at this rate.  Both Mackie and Hoilett are able to play as a striker and as things stand this may be worth a try.

A 0-0 draw against one of the league’s poorer sides is not an amazing start for Redknapp but what else could have been expected?  The team selection looks a strong one, their manner of play was promising, and even though it has only been one game they appear to be a team on the rise.  They should have the label “Too good to go down” attached to them as with large squad and players at their disposal, QPR should not be relegated or even in the position they’re in now.  At the moment Harry Redknapp appears to be the man to save them, just as he did Tottenham in 2008.  Getting the team to mid table eventually seems like a reasonable pursuit for the team, but they are some ways off of pushing for Europe, which is what they’ll need to do to become a global brand as owner Tony Fernandes envisions.  Fernandes’ plans to build a new stadium of 30,000 to 40,000 seems a bit ambitious for QPR who currently sell around 17,000 tickets per match at Loftus Road.  They would have to double their ticket buying fan base to fill their new stadium and to do so would need some rather amazing results and rather quickly.  The idea of expanding Loftus Road has been squashed as well as the proposal of sharing a stadium with Fulham.  Fernandes has stated that he would like the stadium to remain in West London because of the team’s roots, but Philip Beard, formerly a senior member of London’s successful Olympic bid and now QPR’s chief executive with the remit of identifying a suitable location, has found this possibility unlikely.  Even their mega-rich neighbours Chelsea have found it difficult to find new ground in West London, but while Fernandes remains optimistic, Beard is openly dampening expectations.  While signing players like Park and Julio Cesar may help with QPR’s global branding a little bit, it is up to the current squad and manager Harry Redknapp to pull off a strong of good results over the rest of the season and carry such performances into the future in order to really raise the Hoops’ global appeal.  In the summer Fernandes said he has narrowed the search down to two locations but since the season has carried forward, talk of a new stadium has been very quiet.  If QPR build a new stadium with the plans of doubling the amount of fans that come to their matches only to get relegated, they could find themselves in a similar position to that of Coventry City with the Ricoh Arena.  Coventry built the stadium in 2005 after being relegated from the Premier League is 2001, and have struggled to pay for and fill the arena, and now find themselves in League One.

The relegation situation QPR find themselves in at present is something they must absolutely avoid is they are to become the brand that their owner envisions.  If they were to drop down to the League Championship once again, they would lose any hope of a new stadium and possibly lose most of their top players and be back to square one.  With the current squad they have and a renewed confidence under new manager Harry Redknapp, they should be able to forget the Mark Hughes days and be able to at least survive this one season.  Anything else would be devastating to the club.