Who are you betting on? Who will emerge as the next big name in world football?

It is Erling Haaland, son of the mercurial Alfie Haaland, who is poised for stardom amongst football’s greats. Towering over others, at 6’3 , he’s a Norwegian Viking, boasting incredible pace and mind-bogging agility, with a knack for being in the right place at the right time. These qualities set him up to be one of the most feared strikers in world football. Oh, and he’s only 22-years-old.

He’s adapted well to the English topflight, scoring 1.66 goals per 90, scoring 17 goals in 11 games. These stats are astonishing - something you can only see when playing on your PlayStations. It’s not even as if he’s been gifted goals on a silver plate. His xG (expected goals) is 9.9, but he’s scored 17, showing he’s massively outperforming expectations. 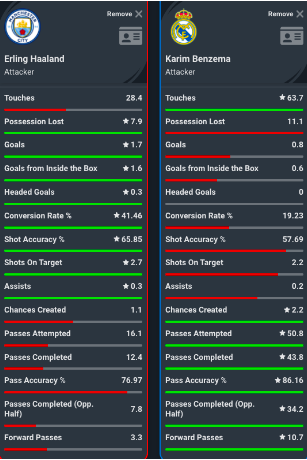 In his current form, the Norwegian cannot be compared to anyone in Europe’s top five leagues  as he is simply electric. When compared to the Frenchman Karim Benzema, Haaland’s ruthlessness in front of the goal shows:

Although less involved in the build-up play (28 touches vs 64 touches per 90), Haaland is more involved in the final third, as he takes more shots, and is more accurate with his shooting. This leads to him scoring more goals. However, since he has less of the ball, these stats show that he is more of a finisher, rather than a playmaker, which makes this comparison to Karim Benzema useful, but ultimately unfair.

Most modern strikers are tasked with being more involved in play overall, dropping deep to combine with the midfield and create space for runners. Although Haaland can do the same, he rarely drops very deep, and instead engages the centre-backs, creating space for others, and utilises his power, strength and instinct to score goals in the final third. These traits mean that a better comparison can be made to Robert Lewandowski:

Lewandowski, similarly to Benzema, does drop deep at times, but overall, his playstyle is similar to Haaland’s. He’s tall, and strong, and uses his reflex and clinical ability to finish chances in the box. Inside the penalty box, the Norwegian is extremely clinical, with a 41% shot conversion rate. 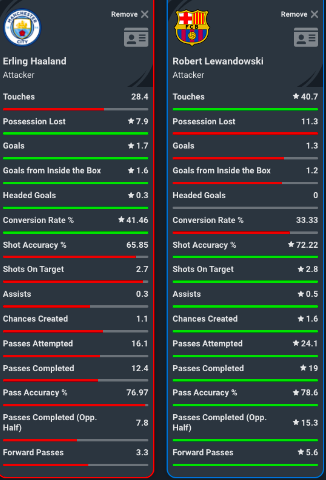 When compared to the Pole, he takes a similar number of shots and has similar accuracy with them. However, Haaland’s one weakness is his link-up play. It could be because he doesn’t regularly drop deep, which allows him to score more, but to develop more skills to be a complete striker, he must improve on his link-up play.

Obviously, now the world has taken note of Haaland’s quality, and this season, Manchester City has lapped him up for £51 million, even though it’s a sheer bargain in my books.

What really makes Haaland so good?

A threat in the box and in the air

At 6’3, the Norwegian is a menace in the air. And the team is bound to benefit when your squad has the likes of Kevin De Bruyne, Joao Cancelo and Phil Foden, who can whip in pinpoint crosses.

In their match against Nottingham Forest, Haaland’s first goal is an excellent example of the threat he poses in the box. 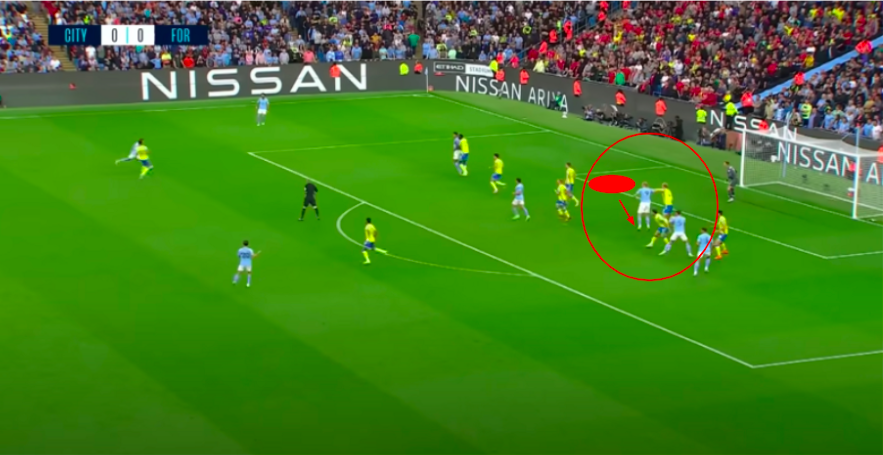 Before the cross comes in, Haaland moves backwards, toward the penalty spot, dragging the defender out of position, and creating space for himself. 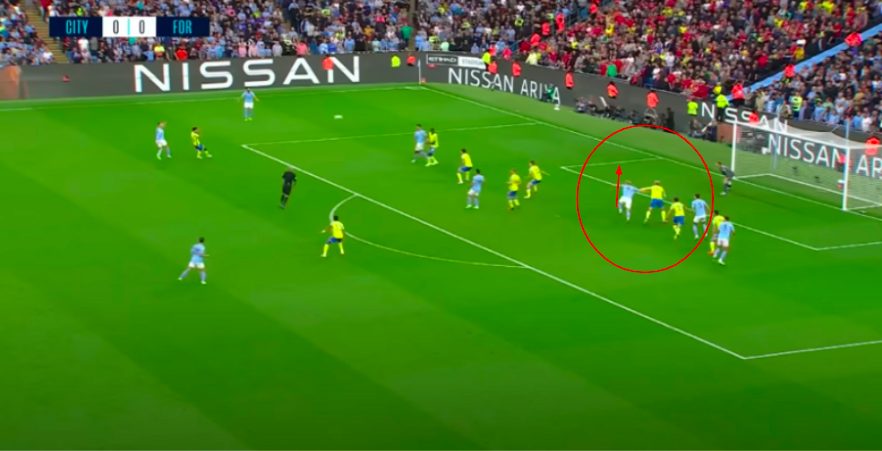 As the cross comes in, Haaland uses his long legs and electric pace to attack the space he just created. He holds off the defender with ease. 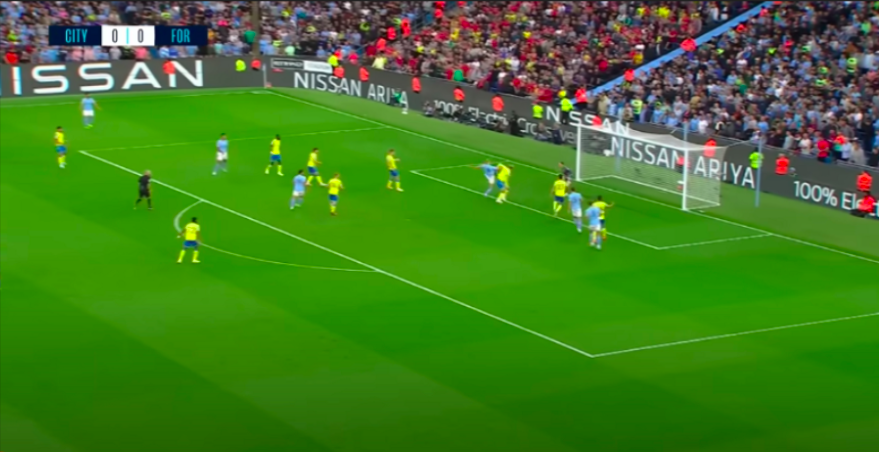 Thanks to Foden’s pinpoint pass, the ball falls perfectly for Haaland. Haaland uses his strength to bully the defender and is able to quickly finish in the back of the net.

This goal demonstrates how Haaland created space for himself with his smart movement, and then how he proceeds to attack that space with his speed, and hold off the defender, with his strength.

Right place at the right time

Haaland is a special player, with a highly developed ‘striker’s instinct’. While most people say that the goals he scores are tap-ins, that would also mean he is always in the right place to put the ball in the net. If tap-ins were so simple to score, wouldn’t everyone be scoring them?

He simply has the awareness and reflexes to react to the ball’s flight extremely quickly, allowing him to get into the right position for tap-ins. 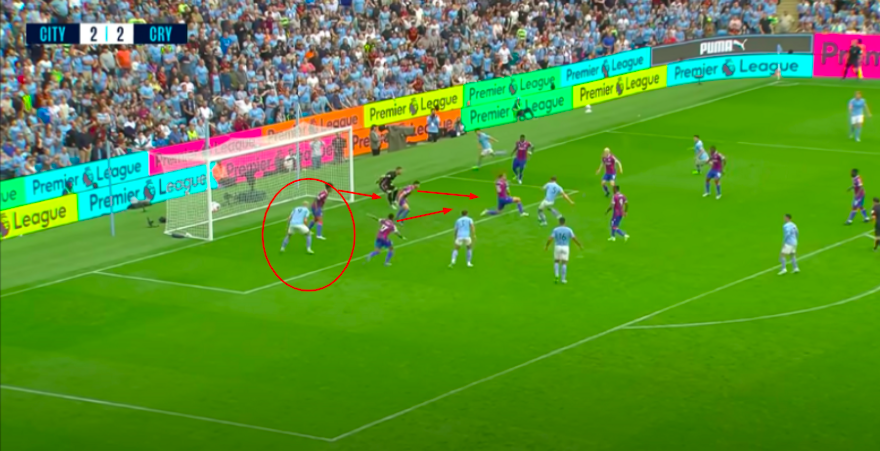 This can be seen in his second goal against Crystal Palace. As Bernardo Silva makes the cut-back, the ball falls to John Stones. The defenders all converge on Stones, to try and block his shot.

Haaland, seeing this, moves in the opposite direction, creating space for himself for a tap-in.

As Stones scuffs his shot, with a bit of luck, the ball falls to Haaland, who guides it into the net. Obviously, there is always some luck involved in scoring tap-ins, but Haaland always seems to be in just the right position to capitalize on a bit of good luck.

This is what’s called a striker’s instinct. He can see spaces that others don’t.

Pace, power and pulling others into play

Haaland clearly has a developed footballing mind, far mature for his age. However, what makes him a true terror is his pace and power. He has a tremendous work ethic, which has granted him extraordinary pace and strength. He outmuscles the toughest defenders and wins footraces in attacking areas. 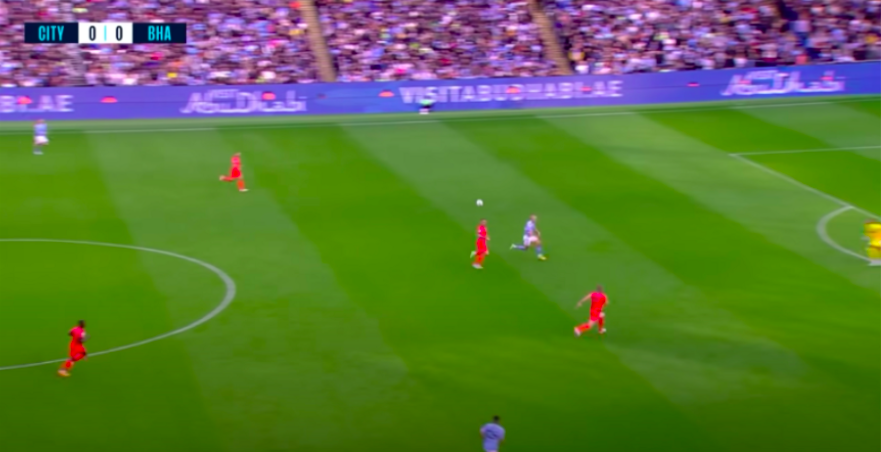 Here, against Brighton, Ederson’s long ball flies over the defenders, and Haaland uses his speed to reach the ball before the keeper can clear. 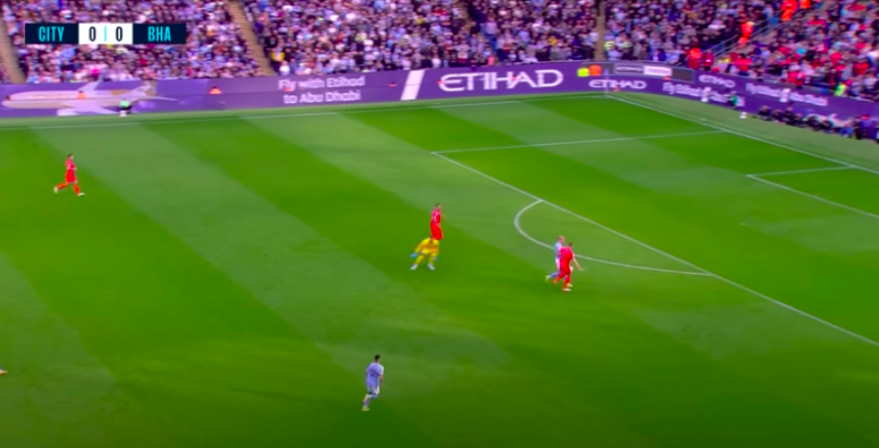 He uses his pace to beat the keeper, getting to the ball first. He has sight of a goal and one defender to pass. 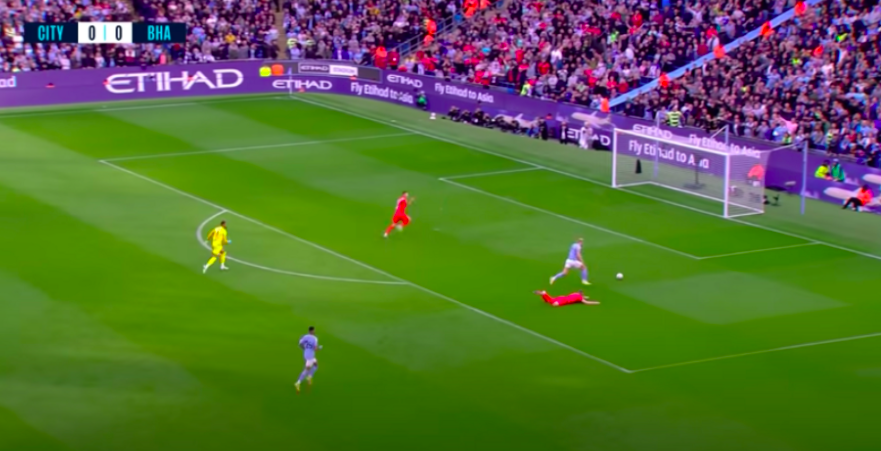 Thanks to his incredible pace and strength, he holds up play extremely well, shielding the ball to bring others into play.

This works for the benefit of Manchester City, as the likes of Ederson can launch balls upfield towards Haaland, to escape pressure. Although Haaland doesn’t drop very deep, if no shooting option is present for him, he has the ability to lay off passes to midfield runners. Since he poses such a massive threat, defenders are attracted to him, creating space for midfield runners, which he can capitalise on. This is not one of his strong suits, as outlined by the comparisons shown above, but he can do it.

Haaland receives the ball from midfield and uses his strength to shield it from the centre-back.

He gets away from the centre-back, still holding onto the ball. He is able to withstand two challenges and turn his body towards Ilkay Gundogan.

He sees the open space Gundogan is running into, and plays a simple pass.

This is an example of how Haaland can pull defenders out of position and hold up play for others. He uses his strength to keep the ball, and has the ability to make accurate short passes.

Haaland’s definitely the best striker in Europe right now. He has all the qualities needed to succeed at the highest level. He can finish from seemingly anywhere, he has the brains to find spaces and the strength and speed to attack them, and most importantly, he seems to have that extra edge, or instinct which makes him much better than the rest.

One area Haaland could improve on is active participation in build-up play. While this may be about how Manchester City sets up their attack, this is certainly one loop that he can tighten.

At 22, Haaland is already an elite striker. Safe to say, Haaland’s era has just begun.