Every season, there are one or two teams in the European leagues who over perform relative to what prognosticators predicted in the preseason.

In the English Premier League, Southampton and to a lesser extent West Ham have been Cinderella stories for what they’ve been able to accomplish; whether it’s been because of past struggles to stay up in the division (West Ham) or a supposed exodus of talent in the summer window (Southampton).

Of course it’s not just the Premier League that’s seen their share of surprise stories. Real Sociedad qualifying for the Champions League in 2012-13 in La Liga was a surprise, especially considering how far they’ve fallen since then.

Athletic Club were in the same boat when they qualified last season and have been a mess this season. Udinese finished third in Serie A in 2012-13. And who can ever forget Montpellier beating out PSG for the Ligue 1 title in 2011-12.

As it stands now, the table for the most part in Ligue 1 makes sense: Olympique  Lyonnais, Olympique Marseille, Paris Saint-Germain, Saint-Etienne, AS Monaco, Bordeaux make up the top 6. But that itself short sells the amount of movement the table has seen.

FC Nantes and Stade Rennais each at one point between week 14 and week 16 occupied fifth spot in the table and at the winter break, Nantes were only two points back of fifth place Monaco.

Guingamp on the other hand were only three points up on relegation at the winter break at a tenuous 13th position. Combine that with the Europa League duties the club were dealing with throughout the season and it wouldn’t have been a shock to see the club falter post winter break and scrap it out to maintain their spot in the French first division.

But it hasn’t been that way. In fact, it’s been the opposite. Guingamp as it stands currently are only six points back of fourth spot (the Europa League spot in Ligue 1) and are the only Ligue 1 side to have made it to the Europa League knockout round. They are tied with Caen for the most points achieved in the last 6 games (13) and recently beat Monaco 1-0 at home.

No one could’ve predicted such a stark uprising mid-season. For god’s sake, Guingamp last season were only two points off of the drop. Michael Yokhin wrote a great piece on Guingamp’s manager Jocelyn Gourvennec that I would implore you to read, but here’s a snippet of it:

Contrary to many stars, Gourvennec decided to build himself from the very bottom. “You don’t become a minister overnight,” Jocelyn says. He worked with the amateurs of La Roche Sur Yon for two years before taking the opportunity to join Guingamp, impressing almost instantly.

The team was promoted back to Ligue 2 in his debut season, scoring 87 goals in 40 matches. Two years later, they climbed back to Ligue 1, alongside Monaco and Nantes. Last season Guingamp won the Cup, beating local rivals Rennes 2-0 in the final. This term, after a slow start, they are making exceptional progress, beaten just once in their last nine league fixtures, not to mention the huge success in Europa League.

The club have tactically been flexible. They’ve played with two strikers in a 4-4-2 or even a 4-2-2-2. They’ve also just played a more customary 4-2-3-1 against the likes of Marseille on the road and still more than held their own against the French giants in their 2-1 loss at the Stade Veledrome.

It’s helped Guingamp that one of their strikers is having the season of his life. Claudio Beauvue last season only scored five goals last season and only 1 in 2012-13. It’s only his third season in Ligue 1 and his second playing primarily in the first division, having applied his trade at Châteauroux and Troyes since 2008-09.

His goal scoring rate in Ligue 2 wasn’t spectacular, scoring only 33 goals in nearly 10,000 minutes before getting his shot with Bastia.

But boom, Beauvue has become one of the best strikers in Ligue 1 overnight. Only Alexandre Lacazette has a higher goal scoring contribution % this season. Beauvue is 6th in non penalty goals at 7 and tied for third in total goals at 11.

His play doesn’t strike fear in your heart in the same way someone like Zlatan Ibrahimovic or Lacazette would, but he puts in a shift, particularly when he’s the sole striker in a 4-2-3-1 and his ability to find himself enough space in situations has been impressive this season

If we take a look at Beauvue’s radar for this season, it reflects a striker showing clinical form this season:

Of course, it’s not just Claudio Beauvue. Jeremy Pied has really come to form as well with how great he’s been as a do-it-all kind of creative winger under Gourvennec. 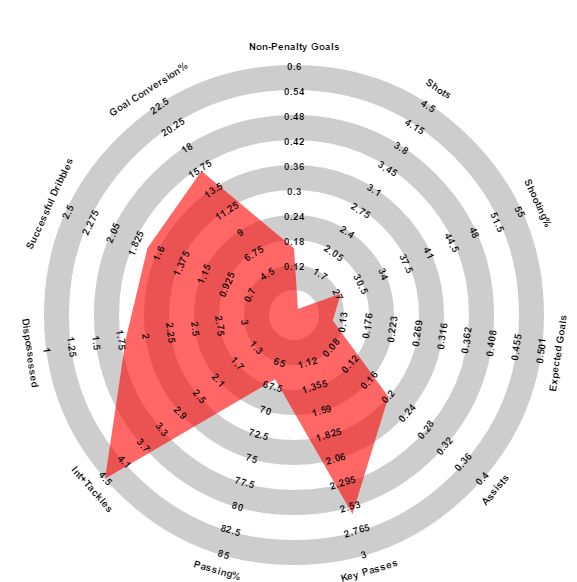 The duo alongside Christophe Mandanne have combined to be the driving forces for Guingamp’s surprise season. The inevitable question with a club that over performs is whether or not this can be sustained.

Could Guingamp actually within two season go from getting promoted from Ligue 2 to challenging the likes of Saint-Etienne and Monaco for a Europa League spot?

The data itself isn’t as warming to Guingamp as maybe the eye test has been. The following graph shows how teams have done using my pseudo expected goal ratio in relation to PDO (a decent proxy for luck in football. The higher it is, the more luck you are getting and vice versa). 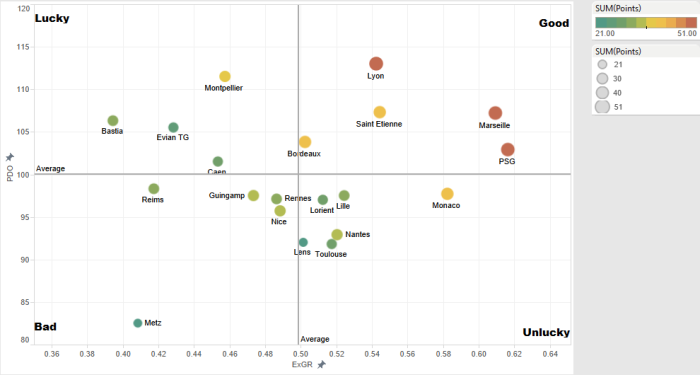 I divided the graph into four quadrants: good, bad, lucky and unlucky. Of course there’s room for interpretation. A team like Metz on here leans towards being more below average than say, Reims. Guingamp aren’t doing well. Their expected goal ratio only ranks them 14th in Ligue 1 this season.

Their saving grace though is the fact that their PDO numbers suggest that Guingamp aren’t benefiting from an extreme amount of luck. They’re actually below the league average and below the 100 threshold for determining luck.

However even saying that, Guingamp don’t have the statistical makeup of a Europa League contender much less a team that will actually get the spot. But even having this discussion is nuts, and it shows how much Guingamp have done in a short time span.

In Yokhin’s piece, it mentions the faint comparisons of Gourvennec to Jurgen Klopp, not in how the two manage, but how they’ve brought new life to previously (in Klopp’s case) small clubs.

Guingamp will likely not qualify for Europe next season and they’ll probably finish around 10-12 in the table. And that’s a massive success for Guingamp if it holds true. For a club as small as Guingamp to be ahead of a storied club like Lille is a great story for French football.

There will be questions to whether Guingamp will be able to retain the likes of Beauvue and Pied, but for now, Guingamp and Gourvennec are riding high and are providing a template for how a lot can still be done in today’s footballing world with the right amount of smarts, ingenuity and luck.

One thought on “How are Guingamp doing this?”