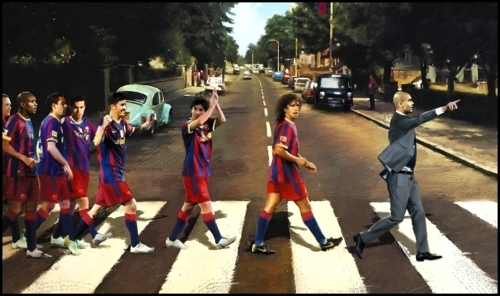 April 9, 1970 is one of the most significant dates in music history; it is the day The Beatles officially announced to the world that they were breaking up. After a seven year period of performing and recording in which they had revolutionised the world of music they called time on an era of creativity which had enthralled millions the world over. But then what has this got to do with Barcelona? What is this got to do with football? Well Pep Guardiola’s resignation in a packed Barcelona press room felt very much like the football equivalent of that seismic announcement of the Fab Four’s split.

This was not your typical managerial departure; the whole football watching world appeared to be invested, to have an opinion on its impact. Similarly to the Beatles’ the announcement came months after the decision was effectively made. Pep Guardiola has admitted that he confirmed to the club as early as December of last year that he would not be taking the option to extend his contract at the helm of the Catalan giants. People had their suspicions that his desire to continue was waning but obviously any public admission would have undermined matters on the field. Furthermore, it appears the club hierarchy were unable to come to terms with the pending loss of Guardiola, unwilling to accept that a team revered the world over would soon lose its creator, its orchestrator, it’s leader.

Even until the night before the press conference Barcelona officials were reported to asking Guardiola to reconsider, but as he has displayed through his teams commitment to his football philosophy, he is a man of sturdy conviction of unwaveringly coherent thought. The announcement came, an era had ended and (at least it felt as if) the party was over. Just as a great band harvest legions of fans who hang on their every move, every word, every release such is the greatness of this Barcelona team they generated comparable levels of admiration not just from the Catalan faithful but from football fans the world over. Managers, players and neutral fans alike seem to all have been speaking as one over the past four years in their unanimous praise of this majestic Catalan machine.

With such approbation clearly comes intense pressure to maintain such artistry adding to the sizeable demands Guardiola, like all great minds, placed upon himself to uphold his own lucid principles. For Guardiola Barcelona is no mere job it is a labour of love both for the way he wants the game to be played and for the club he has been at since the age of 13. External and internal demands have combined to form a pressure which was cited as no longer manageable by Guardiola. The fascination and adulation that has built around his side since 2008 served to create one of the most engaging and surreally sombre press conferences in football history.

Guardiola spoke for what felt like hours covering reasons for his departure in the same detail he undoubtedly applies to his sides match preparation. His announcement, although inevitable, was no less absorbing. Even a selection of Guardiola’s playing staff watched on reflectively and with the same respect they have held for him throughout his tenure. The press conference was concluded with a standing and tangibly emotional applause. The whole event took on more a feeling of a memorial service rather than a 41 year-old simply stating his intention to take a sabbatical from the game. Messi was reportedly too upset to attend while upon reading Cesc Fabregas’ response you would be forgiven for thinking Guardiola had died:

Although I only was with him for 1 year it felt like a lot more. For me Pep was my hero as a kid and an inspiration as a manager. Thank you for the little time we spent, I will cherish it always.

Such an appreciative and almost mournful sentiment from players, press and fans alike following Guardiola’s announcement is testament to the football majesty he has been central in creating and the grace with which he has greeted success and the rare intrusion of defeat. His stewardship is defined by a brand of football which has been as destructive as it has aesthetically striking, as fruitful as it has revolutionary. Pre-occupation with established tactical approaches and the need for physical presence have been binned.

Instead a team with no recognisable centre forward and diminutive physique have indulged in gluttonous and eye-catching possession of the ball which at has at times left all comers at their mercy. The last four years in many people’s opinion has seen the genesis of the world’s greatest ever team. Yet, while their legacy appears cemented and absolute Guardiola’s departure leaves questions over their future. Not least in the form of their mercurial talisman Lionel Messi.

Messi represented incredible yet inconsistent potential under Guardiola’s predecessor Frank Rijkard but subsequent to ‘The boy from Santpedor’s’ reign has become a football phenomenon, a 5ft 6in juggernaut mystifying all that come before him. In just four seasons under Guardiola’s guidance the boy from Rosario has scored an astonishing 201 goals helping Barcelona to 13 trophies. Of course his talent is undeniable but yet under different coaches at international level he has been unable to display it with such prowess. Equally, Xavi and Iniesta, Barcelona’s passing carousel have taken their game to unbelievable new heights compared to their performances under Rijkard.

Tito Villanova is no doubt respected but will the players be able to follow his principles as stringently as they did Guardiola’s? In their eyes will he simply be Guardiola-Lite? Will relentless yet beautiful building blocks of tika-taka passing remain a hall mark of Barca’s game or will they become disjointed through the absence of the reassuring sight of their revered conductor in the Nou Camp dug out? Will Villanova’s Barcelona be able to continue to mesmerise, innovate and evolve in the way Guardiola’s continually did or will his team simply be an attempt at the continuation of a now established method?

Inevitably only time will tell but such an emotive response on that now famous football date April 28, 2012 seemed to illustrate a feeling both from within and without Barcelona that the most special of football eras may have been concluded. This particular brand of Barca-mania for which we must be thankful to have witnessed may well have ceased to be. Like the Beatles without Lennon wouldn’t, Barcelona without Guardiola just won’t feel the same.