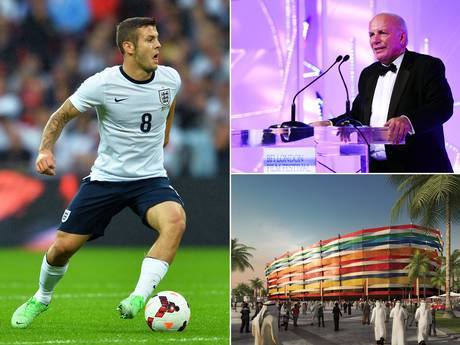 You can just picture it now. Jack Wilshere, the Qatari sun drawing a glistening sweat on thinning hair, thrusting his 30 year-old arms in the air as he holds the World Cup trophy aloft.

At least that’s how Greg Dyke sees it.

The former Director General of the BBC, and current FA Chairman, has written a script that would seem to defy logic and expectation for all but the most foolishly optimistic England fans. Giving a speech in the international break, his two stated aims of reaching the semi finals of Euro 2020 ahead of a World Cup win in 2022 appear lofty to say the least.

Given England’s efforts since Alf Ramsey have amounted to two semi final appearances, the national side will have to outdo themselves by an order of magnitude to achieve Dyke’s goals.

That is not, somewhat surprisingly, the part of his speech that makes the least sense. Despite claims to the contrary, Dyke appeared to place the blame for England’s disappointing performance in recent years at the door of the Premier League. The behemoth of domestic football that extinguishes all hope out of brave young English footballers, crushing their chance of success with foreign imports. Dropping a giant wheel of stinky brie on under-developed English roses.

Dyke wheeled out a statistic in that the Premier League’s first season in 1992-93, 69% of first team starters were English, compared to only 32% in 2012-13. Such a dwindling talent pool, he argued, could effectively end any hope of England competing on the international stage.

That argument doesn’t hold water for a number of reasons. Firstly, England’s great drought in international football occurred before the introduction of the Premier League. The Three Lions failed to qualify for four tournaments in a row between 1972 and 1978 as well as another no-show in 1984. The Premier League era has yielded three quarter finals in a row and only two qualifying failures, less than half that of the 20 years preceding its inception.

But this isn’t the most problematic part of his argument. Even if you ignore the above numbers and believe that England’s performance is not as good as it should be, the Premier League’s foreign players are not to blame.

Statisticians will tell you that just because there is a correlation between two sets of numbers, it doesn’t mean they are causally related. Just as the fact that the inverse correlation between the decline of pirates and the rise of global warming doesn’t mean that Blackbeard was responsible for processing greenhouse gases, so too does the decreased number of Englishmen in the league not necessarily equate to a reduced output of the national team.

Greg Dyke effectively admitted as much in his speech.

Last weekend only 65 English players started in the Premier League with another 14 coming on as substitutes. Taking into account that some of these players are not international standard I think it’s fair to say we already have a very small talent pool and it’s getting smaller…As a result, it could well mean England’s teams are unable to compete seriously on the world stage.

It is safe to assume that if a team had an English player of international standard, they would be getting in the matchday squad at the very least. How, then, would increasing the numbers of English players in the Premier League who are not good enough, make the pool of players available for Roy Hodgson to pick from any larger? It would merely be diluting the quality of the league, filling teams with English players who are not, and will never be, good enough to play for their country.

It is widely acknowledged that England’s top domestic clubs employ huge networks of scouts to visit every corner of the country to dig out potential talent. The best prospects are picked up by academies, where their potential is scrutinised more closely before a judgement is made as to whether they have it in them to succeed at the top level.

It is hard to believe that there is a seriously talented young player in this country who hasn’t caught the eye of one of the 92 professional clubs. Some youngsters are being signed up as young as 7. The best players eligible for the national team will find their way into a league side, where if they are good enough they will move up the ladder. If they are good, but not ready to play at the level of their club, the loan system provides an option for them to learn their trade at a lower-ranked team.

Simon Kuper and Stefan Szymanski’s excellent book ‘Why England Lose’ argues that England are performing at roughly the level at which they should expect to (if not slightly better), based on population size and resources.

An attempt to manufacture a top flight in which there are more English players, or heaven forbid a quota system, would only harm the prospects of English footballers. The best environment for a young player to succeed is to learn from the best, not from those who come solely from their country. By introducing some of the world’s greatest players into our domestic league, we are actually aiding the development of those who have the true potential to play at international level.

It has been said before, and it is worth repeating, that English football can have either a strong league or one with a high proportion of English players, not both.

Greg Dyke has intimated he wants to have his cake and eat it. What his words are actually suggesting is a chain of events that could lead to a long-term decline in the standard of football in this country.