They were the team that defied the odds throughout Euro 2004 by beating France and the Czech Republic en route to the final against Portugal. Led by their German manager, Otto Rehhagel, Greece beat Portugal’s “Golden Generation” in the final, securing their first ever international title at senior level. 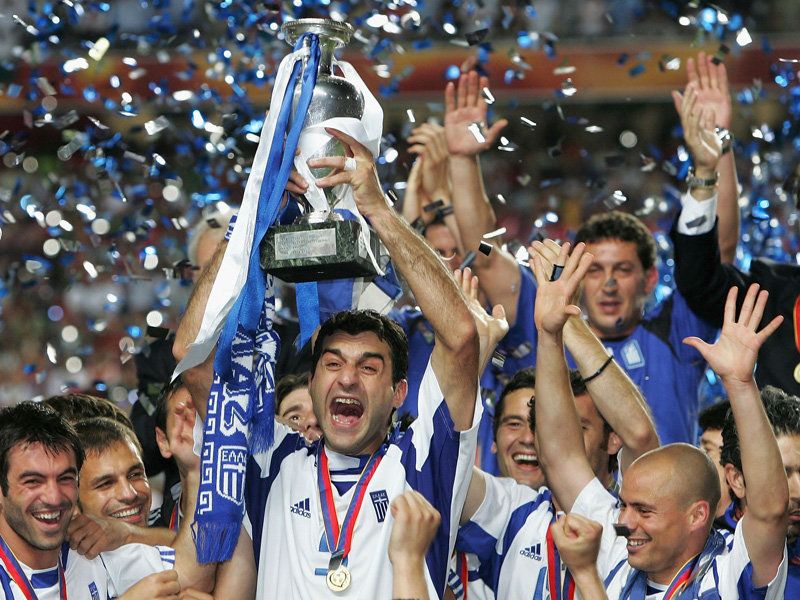 Antonios Nikopolidis – Distinctive for is grey hair, Greek goalkeeper Nikopolidis moved from Panathinaikos to Olympiakos soon after Euro 2004. At Olympiakos he has won 5 Greek League titles in a row and is currently club captain. He retired from international football after Euro 2008

Georgios Seitaridis – Seitaridis joined Porto from Panathinaikos before the start of Euro 2004 for €3m. Ironically, Seitaridis would beat the player he replaced at Porto ( Paulo Ferreira ) in the final. After a season at Porto, Seitaridis moved to Dinamo Moscow. He failed to settle in Russia and soon moved to Atletico Madrid where he remained for 3 seasons. He is currently a without a club

Traianos Dellas – Fans of English football might remember the name of Traianos Dellas who spent 2 seasons playing for Sheffield United between 1997 and 1999. He joined Roma in 2002, but only established himself as a first team regular in the aftermath of Euro 2004. After being released by Roma in 2005, he rejoined his old club AEK Athens. As of 2009, Dellas plays for Anorthosis Famagusta in the Cypriot League

Michalis Kapsis – Kapsis formed a formidable centre back partnership with Dellas which only conceded 4 goals in the whole tournament. After Euro 2004, he left AEK Athens and moved to French side Bordeaux. Kapsis spent only one season in France before moving back to Greece with Olympiakos in 2005. He has since struggled with injuries and now plays for Levadiakos in Greece after playing for APOEL in Cyprus for two seasons.

Takis Fyssas – Like Seitaridis, Fyssas was also contracted to a Portuguese side during Euro 2004. Fyssas joined Benfica in 2003 and remained there for two seasons before being released in 2005. He then moved to Scottish side Hearts where he won a Scottish cup medal. Fyssas retired from football after a brief spell at Panathinaikos.

Stelios Giannakopoulos – Giannakopoulos, better known by his first name Stelios, had 5 successful years at Bolton Wanderers after joining from Olympiakos in 2003. After over 100 games for Bolton, Stelios was released in 2008 and joined Hull on a free transfer soon after. He failed to make an impact at Hull and moved to Greek side Larissa in January 2009.

Angelos Basinas – Holding midfielder Basinas was a vital member of the Euro 2004 winning side. After 10 years with Panathinaikos, Basinas moved to Spain to play for Mallorca. In 2008 he returned to Greece to join AEK Athens. He now plays for Portsmouth but has yet to secure a regular place in the first team. He has won 100 caps for the Greek national side.

Theodoros Zagorakis – Greek record cap-holder Zagorakis was an inspirational captain for the Euro 2004 winners, and also won the player of the tournament award. After playing for Leicester for 3 years in the late 1990’s, Zagorakis joined AEK Athens in 2000. He moved to Italian side Bologna in 2004 where he spent one season before rejoining former club PAOK. Theo Zagorakis is currently president of PAOK after retiring in 2007.

Kostas Katsouranis – Katsouranis was one of Greece’s stand out players throughout the European Championships. He made his name with AEK Athens before moving to Benfica in 2006. With Benfica he won the Portuguese Cup in 2009. In the summer of 2009, he returned to Greece with Panathinaikos.

Angelos Charisteas – Charisteas was the hero of the final against Portugal, scoring the winning goal. He also scored the winner against France in the quarter finals. Despite his performances for the national side, Charisteas failed to secure a regular place in the Werder Bremen side in the 2004-2005 season, and soon moved to Ajax. After spending 3 seasons in Holland, Charisteas joined FC Nuremberg in 2007 but failed to save them from relegation from the Bundesliga in 2008. In the second half of the 2008-2009 seasons, Charisteas played for Leverkusen on loan.

Zisis Vryzas – Vryzas was a tall, hard working striker. After Euro 2004, Vryzas was loaned by his parent club Fiorentina to Celta Vigo in Spain. He spent another season out on loan with Torino for the 2005-2006 season. Vryzas returned to Greece in 2006 with Xanthi and retired in 2008 after a season playing for PAOK. Since retirement, he has been employed by PAOK as a technical director.

Stelios Venetidis – Venetidis was a left back who made a second half appearance in the final against Portugal. He won 4 League Championships with Olympiakos before moving to Larissa in 2006. He still plays for Larissa as of 2009. He won 42 caps for Greece between 1999 and 2004

Dimitrios Papadopoulos – Born in Uzbekistan, Papadopoulos spent two seasons in England with Burnley before moving to Panathinaikos in 2003. He was a regular in the Panathinaikos team between 2003 and 2008 making over 100 appearances. Papadopoulos joined Lecce in 2008 but only stayed for one season. As of 2009, he plays for Dinamo Zagreb in Croatia.