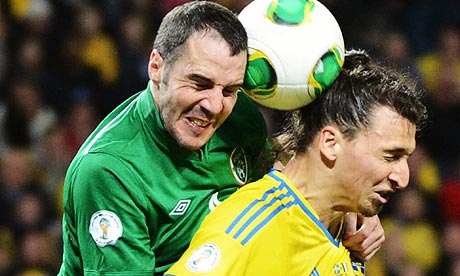 A night that started so promisingly ended with Irish World Cup hopes ending before Irish manager Giovanni Trapattoni returns to his former stomping ground next week.

There was a debate as to whether Trapattoni would be manager should Ireland lose to the Swedes, but the FAI cannot afford to pay him off, irrespective of the fact that the Irish mathematical hopes of qualifying for the 2014 World Cup now have weeks rather than months left in them.

And yet it all started so brightly for the home side at the Aviva Stadium. Shane Long had a great chance inside the opening minute. Richard Dunne headed the ball to him and the Tipperary native seemed to have all the time in the world but Svennson got in an excellent last ditch block when Long was pulling the trigger from 15 yards out.

In truth it was to be the story of a poor night for Long as he too often searched for a pass when he got the ball in advanced position when he could have been more selfish.

The atmosphere was really rocking early doors with a capacity crowd and both sets of supporters in full voice for what was a blood and thunder no holds barred affair which Ireland dominated for the opening quarter. James McClean was one of the star men on the night for the home side and on 20 minutes he very nearly got the ultimate reward when he beat Lustig on the left flank before whipping over a cross-shot which beat Isaksson all ends up but came back into play from the crossbar.

Within two minutes the home side had the goal their play to that point fully deserved. Lustig fluffed his header back to his goalkeeper, allowing poacher supreme Robbie Keane to get a nick to it ahead of the advancing Isaksson, the ball trickles on to the post before the Tallaght man smashes the rebound high and into the net before the Swedish defence can react.

From there, we would desire to press on, but as seems wont under this manager, taking the lead leads to this Irish team cashing in its chips and going on the back foot. Elmander had a chance within a minute of Ireland’s goal but David Forde got down well to hold the striker’s shot at the second attempt.

Just before the half hour, the visitors should have been level. Ibrahimović played a fabulous ball to Seb Larsson but he somehow put his header wide from the six-yard line. The Swedes were level two minutes later following a fantastic flowing move. The previously struggling Lustig across a good ball for Elmander to hammer a diving header into the net.

Another flowing move sees the Swedes take the lead 11 minutes into the second half. Ibrahimović was dropping into the pocket all night and picking out quality passes. Yet another fantastic through ball from the Paris Saint Germain man found Svensson completely unmarked and he beat Forde at his near post.

Can Ireland chase a game under Trapattoni? The answer is no they can’t and the reason why is largely thanks to their manager. McClean is still finding some joy on the left wing though.

Following a couple of substitutions on both sides midway through the second half, the Irish opt for a long ball game. The Irish substitutions are bizarre, particularly the second as one of Ireland’s best performers James McClean was taken off with Anthony Pilkington replacing him.

Going into the last ten minutes, the Irish tactic appears to be to pass the ball back to the goalkeeper from midfield with the goalkeeper  pumping it long. In truth, McCarthy and Whelan have been ineffectual all night with the latter’s frustration leading to a yellow card.

The pattern of the game is finally established late on with the Irish pouring bodies and pumping big long balls forward while the Swedes look more composed in taking advantage of spaces that inevitably open up.

Richard Dunne shows his worth to the Irish side late on when Ibrahimović gets the ball 30 yards from goal wide on the right with nobody apart from Dunne tracking back, but the Tallaght man was happy to see the PSG star tracked out over the dead ball line and in the process snuffing out the danger. It was all in vein for arguably Ireland’s best player over the last ten years however as the Irish substitutions and tactical changes proved almost entirely ineffectual aside from one late chance when Keane almost got on the end of a Long knock down, though once again the Tipperary native could have taken it down, shown some quality and gotten his shot off from ten yards out.

So the Trapattoni era is now surely effectively over. The defeat to Sweden was a suitable epitaph and followed almost exactly the Irish game plan against decent opposition during the Trapattoni era (with France and Italy being notable exceptions) – be well organised, hard to beat and bypass the midfield and hope that something will break up front. It was a formula which nearly got us to the last World Cup. It (together with the good fortune of some very weak opposition in the qualifiers) did get us to the European Championships. It won’t get us to Brazil 2014.

The Swedes celebrated victory as if they’d qualified for the World Cup. There was no change of game plan following the Swedes second goal. Trapattoni is the man to blame for this. Arrivederci Trap – you’re leaving us at least 12 months later than you should have. In the post match press conference immediately after the game, Trapattoni said that he would like to stay on as Irish boss for the Euro 2016 campaign and that “I have done a great job, not a good job, a great job, up to now.” If he believes that, he is surely in a minority of one.