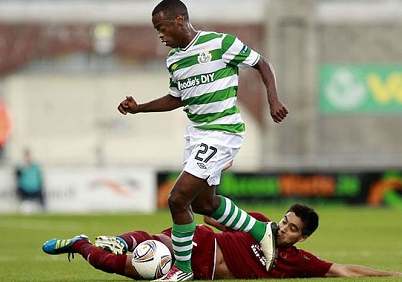 Rohan Ricketts’ career may have taken a path away from the spotlight since the winger left Tottenham Hotspur in 2005 – but it has certainly been interesting. In the space of four years, Ricketts has played for six clubs in a staggering five countries.

Born in Clapham, south London, in 1982, Ricketts joined capital-based Arsenal in 1999, making his debut in a League Cup tie against Manchester United  in November 2001. This would be his only appearance for the club and a year later Ricketts became just the fourth footballer to leave the Gunners for Spurs, their fierce city rivals.

Although Ricketts enjoyed more playing time at Tottenham, making 30 league appearances in three years at White Hart Lane, he again failed to hold down a regular starting place, which is understandable for a young player at a big club. Loan spells at Coventry and Wolves followed, and in 2005 Spurs allowed Ricketts to move to the Molineux on a permanent basis.

The deal initially appeared to be a success, with Rickets playing regularly early on in his Wolves career, but once more he found himself out of favour and being shipped out on loan, this time to Queens Park Rangers. Released by Wolves in May 2007, Ricketts joined Championship side Barnsley, but a recurring theme was emerging. An unhappy spell yielded just 10 appearances before the winger was again released in April 2008.

Deciding his future lay abroad, Ricketts immediately signed for Toronto FC of the Major League Soccer in the US. Again, the spell began brightly – Ricketts scored four times in 27 games in his first season. However, the arrival of Dwayne DeRosario pushed Ricketts down the pecking order and his fate was sealed in June 2009 when Toronto released him to free up wages to allow for the signing of Ali Gerba. Toronto may well have been ruing their loss – Gerba would play just 11 times for the Reds, scoring one goal.

Ricketts could easily have called time on his world tour then, and he almost did. A return to the UK looked likely but at the last minute Aberdeen pulled out of a deal to sign him, citing budget constraints. Having been denied the chance to play in the SPL, Ricketts did what any sensible footballer would do – sign for catchily-named Hungarian side Diósgyőri Vasgyárak Testgyakorló Köre (or DTVK for short).

It was a move no-one, including Ricketts himself, would have predicted a few months before, and unsurprisingly the player seemed unable to settle in his new surroundings. Just one outing for DTVK’s first team was supplemented with a handful of reserve appearances before Ricketts wrote the next chapter in an interesting life story by joining Moldovan giants Dacia Chişinău in August 2010.

Predictably, his stay was again short – Ricketts played just four games in a three month spell. He announced his departure from the club on Talksport, expressing anger at Dacia’s reluctance to pay wages. Ricketts then travelled to Germany to take part in trials and in January 2011 joined SV Wilhelmshaven of the Regionalliga Nord, the German fourth division. A period of relative calm followed, but four months and 12 games later Ricketts announced a return to England was on the cards.

Trials at Southend and Stevenage showed the effects of Ricketts’ travels had impacted the standard of his footballing ability. He admitted his time at Stevenage was a “shock to his body” after spells at lower-league clubs and lower-rated leagues. However, with no concrete offers provided at either club, Ricketts set off for Irish champions Shamrock Rovers. The decision looked to be justified by the carrot of Europa League football which allowed him to play against former club Spurs in the group stage. However, Ricketts didn’t have time to reflect on his return to one of football’s biggest competitions – in January 2012 he was released by Shamrock and once more found himself without a club.

A unique path back to English football was completed on 22nd March when Ricketts signed for League One strugglers Exeter City. A lot has changed since his last spell in England – when he left Barnsley in April 2008, Exeter were busy finishing fourth in the Conference. The Grecians even briefly threatened to grab promotion to the Championship but now they face a relegation dogfight in their attempts to avoid a return to League Two.

Ricketts was clearly pleased to be back in his home country, saying: “I’m just grateful for the opportunity because I’ve been playing away from England for four years so I’m relishing the chance to get back in.”

His career has been eventful and varied and Ricketts should have plenty to write and talk about should he choose to continue a burgeoning media career after retirement. Saving Exeter from relegation, however, is his primary aim, and he knows it won’t be easy: “I’ve won FA Youth Cups back-to-back, I’ve won a league in Ireland, I’ve been involved in FA Cup ties, but for me this would be major because it’s all against us in terms of points”.

No matter who you support, you have to hope he manages it.

For more from Dan, check out his blog.