Two nations that know each other better than most will lock horns at EURO 2016 when Germany and Poland face off in Paris on Wednesday night.

Both side won their opening game, beating Ukraine and Northern Ireland respectively, and this game is likely to decide which of the two teams finished top of Group C.

The bookies odds favour a German victory, but Poland did claim a 2-0 victory when the sides met in Warsaw during the qualifiers.

The reverse fixture went the way of the Germans as two goals from Mario Götze and a Thomas Müller strike set them up for a 3-1 win.

“We do know Poland well, we played against them twice in qualification, two difficult games,” says German defender Jérôme Boateng.

“They are a good opponent. If we bring our game through I’m positive. I think we can win against them but we have to be careful. They have good offensive players and not only [Robert] Lewandowski.”

Of course, Lewandowski is a Bayern Munich team mate of a number of the German squad and is one of the best strikers in the world at the moment.

As Boateng points out though, Poland are far from a one-man team, and it was Ajax Amsterdam youngster Arkadiusz Milik who got their only goal in the win over Northern Ireland.

The 22-year-old scored 24 goals in all competitions for the Dutch giants last season and is seen as the perfect foil for Lewandowski up front.

Milik has credited Ajax and Arsenal legend Dennis Bergkamp with aiding his development, and is happy to be learning from such a great player at international level in Lewandowski.

“It really feels great playing alongside Robert. Together we had 19 goals and 8 assists, that tells the whole story I guess,” he said in an interview with World Soccer earlier this month.

“For more than two years, we’ve been striking partners. And together, with the faith [Coach] Mr. [Adam] Nawalka puts in the two of us, we operate as a dangerous couple.

“But don’t misunderstand me: Robert is by far the best striker of the two of us. I have a lot to learn.”

For their part, Germany certainly have the quality in defence to keep quality strikers quiet, and they showed against Ukraine that they can win without playing particularly well.

The current World Cup holders looked far from their best as goalkeeper Manuel Neuer made a couple of vital saves in that contest, while Boateng made a stunning clearance on the line to prevent a certain goal.

Centre back Shkodran Mustafi and veteran Bastien Schweinsteiger, who looks set for a bit part role throughout the tournament, did the damage at the other end with goals in either half.

“It was not too easy against a strong defence, and their counterattacks were very dangerous, but we found a solution to that in the second half and that’s why I’m quite satisfied with the game and the result,” said coach Joachim Löw afterwards.

Germany and Poland have met in the European Championships as recently as 2008, with the former running out 2-0 winners thanks to a brace from Lukas Podolski, who was born in the Polish Gliwice.

The Poles finished bottom of the group on that occasion but, with three points already on the board this time round, they are more than likely going to make it through to the knockout stage.

Top spot in the group is very much up for grabs for both, and comes with the added incentive of ensuring that the team finishing first will play the third place side from Group A, B or F. 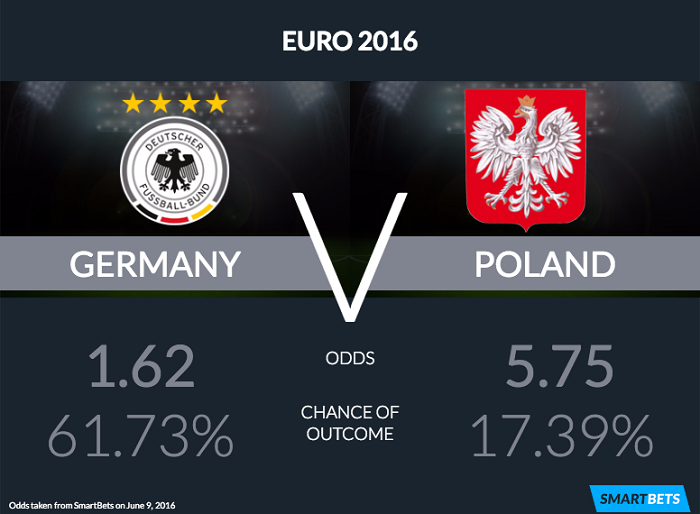