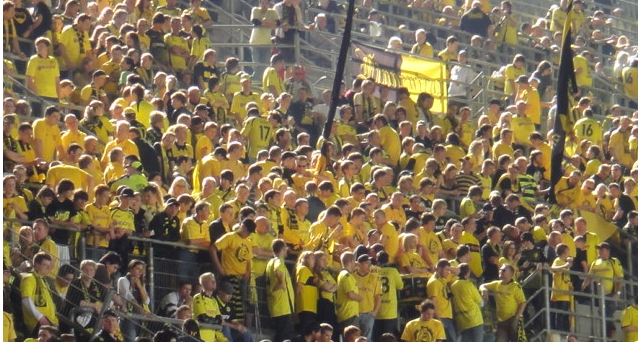 If ever there was a model for efficiency coming from Europe, trust our German neighbours to show us the way. The Bundesliga is a league on the up, mirrored by the increase in attendances. The Germans are doing so many things right in their domestic league at present it poses the question of if is there such a thing as a perfect plan for football to follow before it is too late.

With the risk of stating the obvious, football is big business. The Premier League alone in the 2009-10 season according to Deloitte’s latest figures raked in the gargantuan amount 2.5 billion euros. An astronomical figure which was far greater than that of any other league in the world. However there is one major problem with this. As the revenue continues to grow at a steady rate year upon year, the average wage expenditure is also growing but alarmingly at a much faster rate.  Simple economics will tell you that is not a sustainable plan for the future. Add into the mix that approximately three quarters of the entire revenue stream for the Premier League comes solely from television money and the alarm bells have just been amplified ten-fold. Simply put, the Premier League’s reliance on Sky is more akin to scaffolding holding up the very structure of the game rather than a steady stream flowing within it.

It has been suggested that the television rights deals are what make the Premier League the (self-proclaimed) ‘greatest league in the world.’ The money from Sky has allowed clubs to attract some of the best global talent which has led to a greater number of minions desire to see this talent showcase their abilities on the live stage. Due to extortionate and ever-growing ticket prices and a lack of choice, the only feasible option for the everyday football consumer is to purchase a Sky subscription thus contributing to the recurrence of this cyclical farce where the game does not belong to the fans but to the shareholders, the board members and those whose pockets are lined the fattest. On face value, it would seem that without a monumental television deal in place, profits will be majorly reduced and so this would not be a feasible business plan. We need look no further than Germany and the  Bundesliga to suggest that excellent operating profits can still be produced without the further empowering of pay TV corporations.

Using the same 2010 figures from Deloitte as mentioned above, the Bundesliga is the most profitable league in the world generating a total profit of 138 million euros compared to the 101 million achieved by the Premier League.  This is made all the more remarkable and impressive when you consider that the money generated by TV deals in Germany was a paltry 594 million euros compared to 1.94 billion in the much more ‘glamorous’ Premier League.  So where exactly does this huge profit come from?  How can a competitive league be sustained without the crutch of a TV network?

Firstly, the wage expenditure is one aspect. Astronomical wages are commonplace in football and have been for numerous years so without wanting to enter the debate regarding the morality of this, the fact remains. Sticking with figures from 2010 to portray a fair comparison with the rest of the piece, Premier League clubs on average spent 62% of their annual income on wages whereas in Germany, the figure was down to 54% – the lowest out of the ‘big leagues’ in Europe. Compared to France (71%), and Italy (80%), Germany and England seem to be in a relatively strong position in this area and as such, this has had a sizable impact on driving profits. Indeed the Italian Serie A and French Ligue 1 recorded losses in their annual reports whereas every club in Spain did likewise other than the big two of Barcelona and Madrid, helping to massively distort the overall average figures due to their own individual economic strength.

Moving away from the profits of the individual leagues and focusing on the individual clubs, the structure that exists within German football seems to allow for a much more fan-orientated and involved experience. All German top tier clubs operate under the guidance of the ’50+1 rule’, whereby at least 51% of the club must be owned by club members. These members will pay an annual fee to the club which will allow them privileges such as money off club merchandise but more importantly will give them direct involvement with the running of their club.  Each member of the club will be given a share and within this system, one share will equal one vote when it comes to any key issues that need to be discussed or resolved. The board members are voted for and selected by the club members and as such can act as direct representatives for the fans of the club. This idealistic model has already been adopted with some great success in England with clubs such as AFC Wimbledon, FC United of Manchester and Chester FC amongst others enjoying their lives as phoenix clubs due to issues with ownership regimes.

What this model does mean is that there would be no Russian billionaire owners, no oil baron bankrolls and no clubs being passed around amongst unscrupulous businessmen like a play thing for the rich, to be discarded, thrown on the tip and left to rot as soon as the latest fashionable toy appears (see Portsmouth). Also any profits made will remain in the club to help maintain the status of the club and the team performance rather than funds be distributed elsewhere to refinance other businesses and to pay off debts accumulated from separate practices. This has been one of the reasons why the Bundesliga has become the most unpredictable and competitive league in Europe. Since 2004, the title has been won by Werder Bremen, Bayern Munich (four times), VFB Stuttgart, Wolfsburg and Borussia Dortmund. Whilst Bayern are still the dominant club, the gap has been closed and comparable with England where one of only two or three teams can win the league, this makes a refreshing change.

In turn, this unpredictability has led to increased attendances and further interest in the league.  As 1954 West German World Cup winning coach Sepp Herberger once said, “You know why people go to the stadium?  Because they don’t know how it will end.” This remains as true now as it was then and at a time when football is all so predictable, what a breath of fresh air it is to see the so called lesser teams being able to compete with their domestic powerhouses. The average attendances amongst the Bundesliga clubs in 2010 stood at a whopping 42,700, the highest in Europe.  Compare this to 35,400 in the Premier League and 28,399 in La Liga and our German cousins are obviously doing something right.

The German league is living proof that you do not need to charge ridiculous amounts for tickets and TV rights in order to generate a sustainable profit. Indeed a ticket in Dortmund’s ‘Yellow Wall’, the largest stand in Europe seating 26,000 people can be purchased for as little as £13. There are separate areas for fans who want to stand on the terraces and sing and those who want to simply sit down and watch.  The match ticket also doubles up as a train ticket allowing free access to the game. Football in Germany certainly seeks to empower the fan and as such, they are reaping the rewards.

The model is by no means perfect and as with everything, flaws can be found. However, with the state of the game in England being commercially run as a marketing tool and money spinner for the rich to get richer, a mere commodity turning fans into consumers, it seems to be a much more viable option and  tenable business plan that what is presently wedged into our game. There are many lessons we can learn from the Bundesliga as a cost-effective, fan-centred workable example of how football could and perhaps should be. German football is the Industrieland and English football must catch up before the bubble completely bursts.

A graduate from Sheffield Hallam University after studying social and cultural studies in sport, I have always held a strong interest in all things football. I have produced articles for my local newspaper and also for different websites on various topics from lower league match reports to in-depth analysis of the state of the game within wider society. I am an aspiring sports journalist currently on the hunt for a permanent position.

14 thoughts on “German Efficiency – The future of football?”