Chelsea overcome the challenge of Liverpool at the Bridge, Man United snatch a late draw against Sunderland, a brilliant Cesc Fabregas inspires Arsenal to six goals against Blackburn and Portsmouth finally win a game! 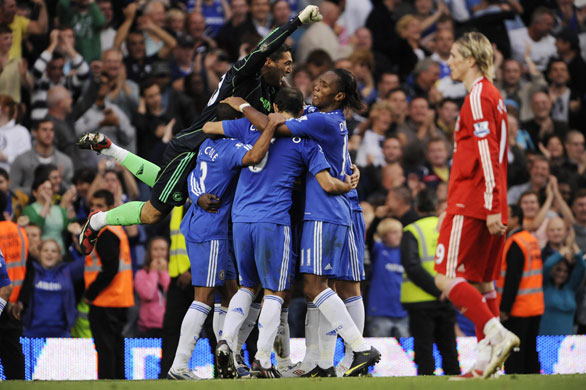 Chelsea jumped back to the top of the table after beating Liverpool at Stamford Bridge. Didier Drogba inspired the two second half goals, first after Javier Mascherano lost possesion in the middle of the park. Frank Lampard set the Ivorian striker through on the left who crossed for Nicholas Anelka, tapping in to score against his old side. Drogba’s strenght paved a route for himself, getting past Jamie Carragher along the byline and crossed for substitute Florent Malouda, who got in at the near post. Fernando Torres was kept quiet for the whole game thanks to the superb defending of Ricardo Carvalho and John Terry. Liverpool’s best chance to get on the scoreline came late on when Yossi Benayoun faked a shot to bring Hilario to ground, but his proper shot was pulled wide of the open goal. Hilario was the hero on a couple of occasions, the best keeping Gerrard’s long range effort out in injury time. Chelsea leapfrog Man United to return to the summit, while Liverpool suffer their 3rd league loss of the season, already surpassing the two games they lost last year.

Cesc Fabregas delivered one of the best performances of the season as Arsenal beat Blackburn 6-2 at the Emirates. Blackburn went into the lead early on when Steven Nzonzi headed in, before Thomas Vermaelen buried a twenty yard strike to level. David Dunn put Blackburn back into the lead on the half hour mark, but Arsenal equalized again this time Robin van Persie slotting home. Andrey Arshavin put Arsenal ahead for the first time, bringing a thrilling first half to a finish with a cooly slotted finish. Fabregas, who created the first three goals, added to his impressive haul with a beautifully lofted strike from outside the box for the fourth. He was at it again soon later, tipping the ball for Theo Walcott whose low shot found the far corner. Nicklas Bendter added further misery for Blackburn with a great shot from just outside the box, hitting off the far post and in. Sunderland took advantage of a sluggish Manchester United but a late own goal from Anton Ferdinand meant they travelled back to the North East with just a point. Darren Bent put the Black Cats into a shocking early lead when he turned sharply and buried a strike from outside the box into the left corner. It took til the 50th minute for Man United to equalize, with John O’ Shea finding Dimitar Berbatov who scored with an impressive bicycle kick. Kenwyne Jones put the visitors back in front moments later, clashing with Ben Foster in the air but gathered himself to nod in. Kieron Richardson handed United a lifeline when he was sent off for kicking the ball away, picking up his second yellow card. But it was Sunderland’s mistake which handed United the point, Anton Ferdinand losing his direction from Patrice Evra’s cross and knocked the ball into his own net.

In other news, Portsmouth picked up their first win of the season against Wolves. With news of another takeover circling, Paul Hart’s side were in desperate need of getting off the ground in the league and Hassan Yebda’s goal was enough to pick up three very valuable points. Croatian pair Niko Krancjar and Vedran Corluka brought Spurs from behind to earn a draw against Bolton. Ricardo Gardner put the Trotters in the lead after three minutes from inside the six yard box, but Krancjar levelled thirty minutes later. Kevin Davies headed in to put Bolton back in the lead, but Spurs levelled again with Corluka.

Burnley maintained their 100% unbeaten record at Turf Moor with a 2-1 win against Birmingham. The very impressive Stephen Fletcher opened the scoring from just inside the box, before Andre Bikey doubled the lead. Sebastian Larsson scored a late consolation, direct from a free kick. Stoke ended Everton‘s five game unbeaten run with a 1-1 draw at Goodison. Robert Huth headed in the opener, but Leon Osmon levelled minutes later with a top corner strike.

Second half goals from Jan Vennegoor of Hesselink and Geovanni earned Hull City a valuable 2-1 win against Wigan Athletic. Dutch striker Hesselink headed in from close range to open the scoring, before Geovanni got through to slot in the second. Scott Sinclair scored a late lifeline for Wigan, but it wasn’t enough as this win takes Hull outside of the bottom three. And finally, a late Junior Stanislas equalizer earned West Ham a point against Fulham in today’s London derby. Carlton Cole headed in after fifteen minutes to put the home side in the lead, but two second half goals from Danny Murphy (a penalty) and Zolton Gera brought the Cottagers from behind. But young Stanislas’ injury time strike levelled for West Ham with a cracking strike from outside the box.

One thought on “Premier League Round-Up”