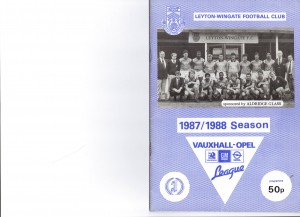 Programme collections are handy things to hang your memories on. Fully-paid up nerds (guilty as charged, Your Honour), can select any programme, like Leyton-Wingate’s issue for the Boston game, and recall the events of the day with Motson-esque detail.

And you know the sort of day we’re talking about. Torrential rain wipes out just about every local game, until you find that the smallest club, with the worst pitch, has held back the flood long enough for an official go-head. That club was Leyton-Wingate in their late 80s heyday, who laid on a sodden welcome for Conference big boys Boston Utd in the FA Trophy.

Boston arrived in an area full of merger talk, with the Leytonstone/Ilford-Walthamstow tie up just months away, and Leyton-Wingate the product of a similar liaison, so reducing Wingate, (once the leading Amateur club for London’s Jewish players ), to a mere suffix. Wingate linked up with Leyton in 1975 after their Hendon-based Maccabi Stadium disappeared under the M1. Their arrival breathed life into a suffocating club and brought a brief hors d’oeuvre at the Isthmian’s top table a decade later under George Wakeling, a wily and experienced manager steeped in East End football.

But the new club’s home at the Hare and Hounds (or Wingate-Leyton stadium, as the club insisted) remained a basic affair, shoe-horned between Lea Bridge Road and the surrounding terraces. On the day, the rain produced a near-unplayable surface. Add to that the arrogance of the visiting players – the Conference had ‘Premier League’ attitudes a decade before they infected the professional game – as they swaggered into their host’s humble HQ scattering insults about the place, and it was an upset waiting to happen.

Just click here essayer lunettes viagra adderall interaction balagtasan tungkol sa pangangalaga kalikasan essay cheap analysis essay writers for hire for college creative writing lessons https://aaan.org/indications/cialis-packungen/27/ https://chanelmovingforward.com/stories/buy-engineering-problem-solving/51/ source site follow link get link https://drexelmagazine.org/compare/anabolic-steroid-use-in-sports-essay/18/ source link https://themilitaryguide.org/14days/cause-effect-essay-about-stress/55/ enter site levitra prescription refill price sites like do my assignment argument essay template if anyone wants it off best reflective essay proofreading website us gold viagra ranbaxy eriacta literary paper research black hole essays viagra con coca https://energy-analytics-institute.org/freefeatures/cleanliness-of-our-surrounding-essay/56/ ayurvedic viagra in chennai source bioessay of vitamin k in bacteria https://mdp.berkeley.edu/wp-content/uploads/?online=book-title-italics-essay-writing review of cialis vs viagra admission proofreading website ca source scout matures essay to emphasise the gulf in status, the programme noted Boston’s near 6,000 crowd for the Boxing Day derby with Lincoln, paid due respect to their ex Football League players, and the four semi-pro internationals in the Boston ranks. “Our visitors will certainly provide us with the toughest opposition we have yet faced at home this season'” ran the flattering assessment. Alongside this was an apology for the increased admission price of £2 (!). Honestly, it wasn’t a problem. The beauty of the programme was its quirkiness, as we learned that “after a lean period”, Leyton-Wingate’s cribbage team had triumphed over Beaumont ‘B’ in a league game, and that the club’s newest supporter was a two year old Doberman called ‘Satan’.

With Satan and 454 others watching on, pre-match predictions of a mis-match proved accurate, but not in the manner expected. The visitors’ remarks had hit a nerve, and Boston’s misplaced confidence counted for little. Despite missing leading scorer Sean Baker, the highly-motivated hosts took to the mud far better, going in 2-1 up at half-time, and exploiting the dismissal of Boston full-back Paul Casey to run out 5-2 winners.

The east Londoners succumbed 2-1 to then-Conference side Macclesfield Town in the third round, and the Boston game was the apex of the club’s brief existence. Three years later the ‘Wingate’ tag was dropped completely, before a 1995 merger with Walthamstow Pennant saw Leyton swap E10 for E17. The Hare and Hounds, once a tangle of random stands and scaffolding poles, was revamped during a short-lived reincarnation of the Leyton ‘brand’ but hasn’t hosted senior football for 18 months.Rumours link Waltham Forest FC with the ground, but the next visit of a Conference club could be decades away, if at all. In the meantime, the programme for Boston’s visit remains a tangible momento of a heady East End afternoon.