This summer was duly declared Hot Strike Summer. As the heat intensified due to the climate crisis, political fervour did too, with rail workers, criminal barristers, airline crews, further education and University staff taking to the picket line. That political heat shows no sign of cooling off.

The fiery red autumn leaves are falling and a winter of discontent awaits, with unions representing nurses, teachers, ambulance crews and firefighters, all currently balloting members on strike action. Inflation might be at a 40-year high, but so are our anger levels. While Jeremy Hunt is eager to take the Government’s favourite austerity mobile for yet another joyride, British workers have had enough and are taking the wheel. And women’s grassroots football teams are right behind them. 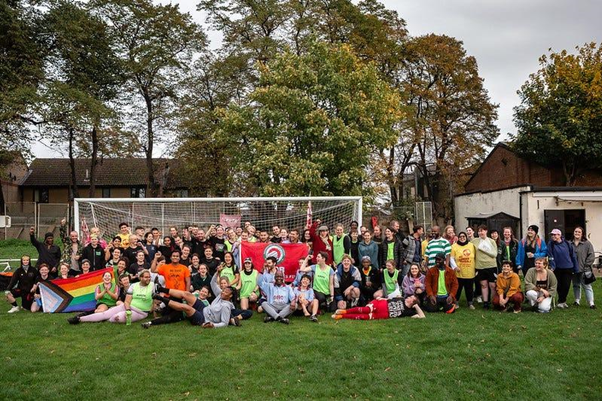 On 22 October 2022, Clapton Community Football Club (CCFC), Queerspace FC and the Deptford Ravens, three grassroots football teams in London, held a solidarity football tournament to raise money for striking security guards at University College London (UCL). Research by the National Football Museum finds that the crossover between women’s grassroots football and striking workers isn’t as unlikely as you might think. In fact, the money raised and support shown to workers by women’s football teams in the Miners’ Lockout in 1921 is considered a key catalyst for the FA’s 50-year ban of women’s football in that same year. After the First World War, the government set about re-privatising the coal industry. As coal owners resumed control of the industry, they announced a reduction in workers’ wages, who staged a lockout and withdrew their labour. The industry hoped to ‘starve them back to work’, but grassroots women’s football came to their assistance by raising funds to set up distress relief and soup kitchens to support the miners. 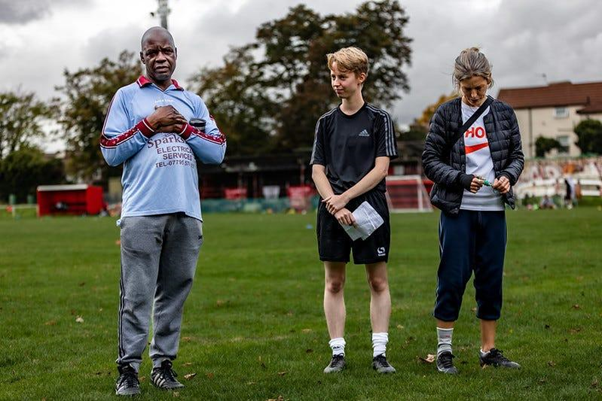 UCL security guards from the Independent Workers’ Union of Great Britain (IWGB) are going on strike from 14-16 November 2022, to demand an end to outsourcing, which saw contracts for University services such as cleaning, portering, catering and security tendered out to private companies 20 years ago and wages driven down. Martin Johnson Wogido, a UCL security guard of over five years and Chair of the IWGB’s Universities of London branch explained,‘we’re fighting for a minimum of £15 per hour, which was the rate of pay before our jobs were outsourced, we’re demanding recognition of our union, IWGB, and we’re calling for an end to outsourcing’. Martin clearly outlined why outsourcing, a very common practice in higher education in the UK, is exploitative, ‘We want an end to outsourcing, we have a great relationship with UCL’s academic staff, but our experiences with the subcontractors are not good. UCL pays £23 per hour to the subcontractor and we get £13 or £14 an hour. They’re milking us, they’re a middle man that isn’t needed’. Hardwiring their privatisation mission, the Tories have cut funding to Universities, resulting in them increasingly adopting ‘business-like models’ (Schibik & Harrington, 2004) to make savings.

Alice Devine, founder of Deptford Ravens and artist behind the iconic posters for the strike solidarity tournament noted, ‘many of us in grassroots football went to University, we have benefitted from this privilege and it’s important we’re pointing out the issue of working conditions in universities’. IWGB’s campaign points out that the majority of the outsourced security guards are from black and minority ethnic and migrant backgrounds, suggesting that subcontractors tend to employ these workers on ‘inferior’ terms and conditions compared to in-house staff. Outsourcing highlights inequalities in pay and terms and conditions between academic and non-academic staff in Universities, ‘we went on strike in 2019, which is what secured security guards sick pay and holidays and therefore parity with academic staff’, Martin stated. In football stadiums, outsourcing is used to employ ground staff and billion pound clubs such as Arsenal and Manchester United have been found to pay workers below the Living Wage, currently £10.90 per hour in the UK and £11.95 per hour in London. 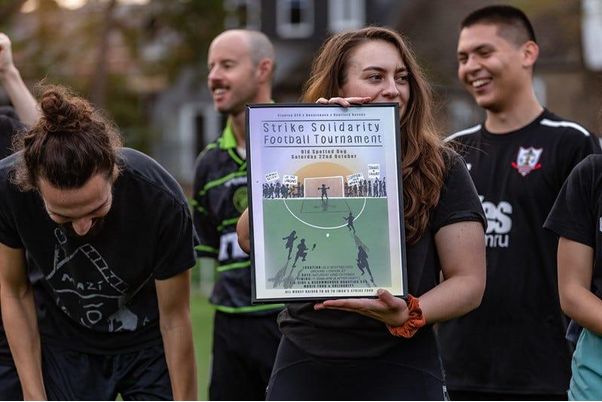 Despite the apparent inequalities in modern football, the game can also act as a force for social justice. Activism forms the chromosomes of Clapton CFC’s existence, while their home ground represents a site of resistance against corruption and money-grabbing in football. In 2018, Clapton FC supporters fought to split from the previous chief executive and established a fan-owned community football club. Ellie Guedalla, CCFC coach and co-organiser of this weekend’s tournament, told of the history of the Old Spotted Dog ground, ‘it’s the oldest football ground in London, which is now fan-owned by Clapton members’. Now one of a four dozen fan-owned football grounds in the UK, Clapton fans mobilised and self-organised first to buy the lease and then the ground’s freehold, which they successfully secured a community loan for in 2020.

Ellie emphasised the significance of The Old Spotted Dog’s history, both as a space steeped in centuries of history, having been Clapton FC’s ground since 1888, and also a place where Clapton fans made history, ‘I’m just so passionate about the history of the ground, I want to tell everyone’. The ground isn’t just a place where football is played, it’s a home for CCFC’s collectivist values and proof of how community campaigning can triumph. Amaka Udeagbaja, who plays for the Deptford Ravens, noted, ‘Football can be a very problematic space with toxic masculinity, racism and homophobia running through it, these grounds are making a concerted effort to be political and against discrimination. You walk into the club house and see clear anti racist symbolism and Antifa flags and understand that, here, things are different to what football traditionally represents’.

Naturally, CCFC’s activism didn’t start or end with bringing the Old Spotted Dog into fan ownership. Last summer, together with activists from feminist direct action group Sisters Uncut, IWGB union, No More Exclusions and two football teams for refugees, CCFC arranged a Kill the Bill football tournament to protest against increased police powers and the affront to human rights that was the Police, Crime, Sentencing and Courts bill. In 2018, Clapton members came together to create a one of a kind anti-fascist football shirt, using the colours of the International Brigades’ flag and the slogan ‘No Pasarán’, ‘they shall not pass’ to celebrate the international fight against fascism in the Spanish Civil War. In the fabric of the shirt and in the collaborative way it was made, the values of anti-fascism live on.

‘We try to do as much as we can’, says Eva Georgiou, part of CCFC’s organising committee, as she decorates pitch side barriers with colourful pro-LGBT and anti-apartheid banners, handmade by Clapton fans, making it clear that what Clapton do is more than just sport. Activism, democracy, transparency, equality among members are seamlessly incorporated into Clapton’s every act. Ally Walker, a player for Clapton Massive, one of CCFC’s women and non-binary teams, sums up the purpose of tournaments like these, ‘it’s about like-minded who believe in a cause coming together’. Ally identified fun as a key element of this recreational but competitive environment created by everyone who attended The Old Spotted Dog on Saturday, ‘I always say that the three fs of football are fun, football (obviously), friendship’. Eva adds to the alliterative artfulness with, ‘Today there’s a fourth f, FUNDS’. 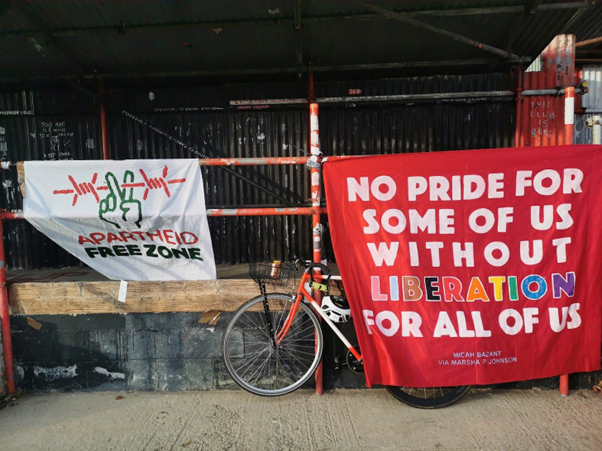 Activism is also at the core of Queerspace FC, who recently arranged a tournament to fundraise for the Outside Project, an LGBTIQ+ homeless shelter and community centre (they also have a great football team and participated in the strike tournament) and have future plans to arrange a refugee solidarity match. Katie Nelson from Queerspace FC explained ‘Queerspace was started in 2016, back then, they were looking to start a centre, a physical space for LGBT people to come together. They were looking at vacant buildings in Hackney, but couldn’t find anywhere. In the end, they decided to play football because it’s free. That’s how it got its very casual, kick about character’.

Katie expressed ‘I personally think that activism in football can have its limits, it’s just one part of showing up for a cause’. Katie emphasised seeing football as more than a sport, ‘it’s about seeing the context you’re in and how rules favour or work against you and others and analysing your participation in football’. Playing football means engaging in broader socio-political issues, ‘you play football in your community, so you should also support your community, including striking workers’, Katie astutely reasons. While the tournament doesn’t provide much-needed resolution to the UCL security guards’ demands, Katie said that Queerspace want to show the workers that ‘we have their backs, we’re here to support them in whatever small ways we can and combat the anti-strike, anti-worker sentiment of government’.

Anabel Bennett, a campaigner with London Renters Union (LRU) also cited the importance of football as a space to come together, ‘In LRU, we’re in branches so football is actually one of the main ways members come together. We don’t train together all the time but last summer we had an inter-union football tournament. It’s a fun thing to do amongst ourselves’. Anabel referred to ‘football as a frontier’, it lays bare many social issues, including racism, sexism and homophobia, but is also a space in which they can be tackled. As these tournaments show, the fight for change doesn’t stop at the sidelines, it enters the pitch, gaining momentum from the joy created as the ball is passed around the pitch. Martin reflected on the role of football in activism, ‘music and football galvanise people. We’re all together on a football field, we’re all together as workers’. Martin explained that the collective action of striking is what got outsourced staff holidays and sick pay, ‘we need direct action to get change. In IWGB Union activism is at the core of everything’. Like football, activism is motion, energy, unity and also requires half-time to regroup and restore strength.

Alice from Deptford Ravens comments, ‘this question often comes up around how to find joy in activism, to make it sustainable’. With football, Alice reflects, ‘it’s kind of the other way around, football is the joy and from there you can work activism into it’. Alice’s posters for the tournament centred on bright colours and playfulness, balancing joy and activist art to support the strike, ‘When designing the posters, I went for fun, joyful illustrations, using the protestors’ placards to communicate the more ‘serious’ messages about the strike’. Alice set up the Deptford Ravens football team six months ago, ‘we already have this spirit of helping each other emotionally by having fun in difficult times’. Alice affirms that ‘Deptford is a very radical, engaged and caring community and those things are my values too. In Deptford Ravens, we make a point of supporting each other. We want to extend that support to other people in our community too’. 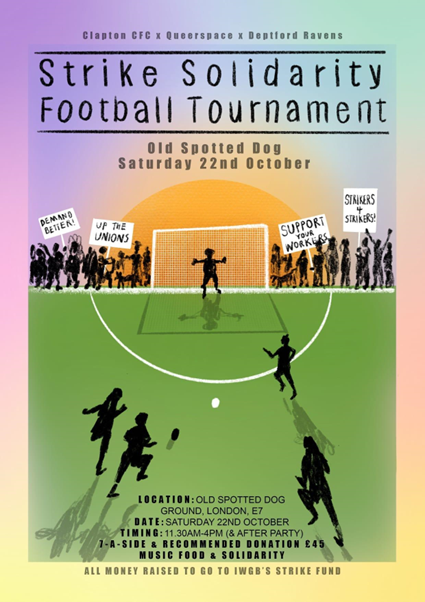 It may seem odd to draw parallels between grassroots activism and grassroots football, but when you look beyond the surface they have more in common than you think. Both are embedded in their communities and well-acquainted with the issues of the day in modern football and society. It is from this knowledge that grassroots football and activism have the capacity to challenge the state of play, to stand against hierarchies of oppression, to highlight that in an economic system motivated purely by profits, we lose the value of football, community and the workers that keep our society going. The cost of living crisis shows the ever-growing wealth chasm both in football and society. The fight for workers’ rights, at the picket line and on the pitch, is central to redressing this injustice.

How to support the strikes:

Join the striking UCL security guards at the picket line between 14-16 November. Donate to their strike fund here.