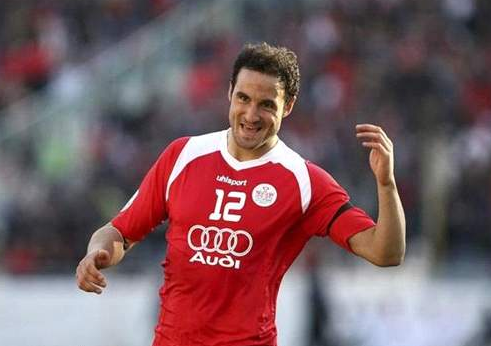 “Iran? You’re not serious are you?!” This is how Irish-born Libyan international Éamon Zayed admits to have impulsively reacted when he first heard of the offer for him to join Iranian giants Persepolis. The striker had been without a club following the collapse of his club Sporting Fingal and was widely wanted by clubs not only in Ireland, who’d have thought that 12 months later he’d would have made it to Iran, via Derry?

In this piece I will look at how Éamon Zayed went from being a League Of Ireland journeyman to becoming a hero in the eyes of one of the supporters of Iran’s biggest clubs.

It all started for the young Irishman at the age of 16 in the youth team of English and then-Premier League side Leicester City. Unfortunately for Zayed, it never really worked out for him in England. After just less than two years with The Foxes he returned to Ireland because, in his words, he “had a few problems over there.”

It’s fair to say that Bray Wanderers were happy it didn’t work for him across the water. He soon signed for the team just south of Dublin and his time there will not be forgotten quickly by the fans. Zayed went on to play over 100 league games for The Seagulls, bagging 54 goals in the process. His time at Bray was not uninterrupted, unfortunately for the supporters of The Wanderers. Whilst playing for Bray, he was loaned out on two occasions. The first time was in the middle of the 2004 season when English side Crewe Alexandra made an approach for the striker. He never really impressed at Gresty Road, largely because he was never given any real opportunity to. During his time there he didn’t manage to play a single league game. One season later, another loan move came along. This time it was Norwegian side, Aalesunds FK. His time here was not too different from his time at Crewe. However, he did manage to make one league appearance and unsurprisingly, failed to find the net.

It was not long before Bray lost him on a permanent basis. Mid-table mediocrity was all that was ever achievable with the seaside club so Zayed made the move north to Drogheda United. He really hit the ground running with the Boynesiders, scoring a goal on his debut as they beat Dublin side St. Patrick’s Athletic 2-1. His decision to join Drogheda was justified when they became champions in 2007 and Zayed finished the title winning season as the club’s top goalscorer. Other clubs were beginning to take note of the twenty-four-year-old. He only spent a total of three seasons with the Louth club, making a total of 71 league appearances and scoring 20 league goals in his time there.

Things began to fall apart for Drogheda only one year after getting their hands on the Premier Division trophy. At the end of the 2008 season, Drogs entered examinership. This came as a result of failing to pay a €500,000 loan to the Revenue Commssioners and a €10,000 rent payment to Bohemians Football Club for the use of their stadium, Dalymount Park, in the Champions League qualifiers. These financial problems inevitably led to the departure of some of the clubs players; Zayed was one of these.

He left cash-strapped Drogs to join new boys and financial powerhouses Sporting Fingal. This club was created by the Fingal County Council as part of a soccer development scheme.In 2009 Fingal began to build a team, including Zayed, that could of finishing in the top half of the Premier Division while they played in the First Division. Fingal ended the 2009 season with promotion and as FAI Cup Champions, having come from behind to defeat Sligo Rovers 2-1 in the final with two goals in the last five minutes. After a good first season in the Premier Division, Sporting Fingal ceased to exist due to financial irregularities and Zayed was left clubless.

Libyan side Al Ahly (not to be confused with Egyptian giants) then looked set to sign the forward. Unfortunately this transfer fell through following the introduction of a peculiar new rule which banned foreign-born Libyan nationals under the age of thirty. (Very strange, I know!)

The collapse of this deal allowed Derry City to swoop and snatch a bargain. Zayed only had one season with The Candystripes, but it was definitely his best season as far as goalscoring is concerned. He finished the 2011 season with the Northern based club with 24 league goals in 36 league appearances. This total earned him the accolade of finishing as the league’s top goalscorer and being voted as The PFAI’s Player of the year. The club also tasted silverwear in the form of the League Cup as well as a third placed finish in their first season back in the Premier Division.

After just one season with Derry, Zayed’s career took an unexpected turn. He received an offer from Persepolis, an Iranian Pro League side to go and join them on a six month contract. After being noticed while playing for the Libyan national team, the Tehran based club showed interest in Zayed.

This is when his career exploded into life.

Following signing for Persepolis without a trial, there was a lot of weight on Zayed’s shoulders to succeed from the get go. To say he exceeded expectations would be an understatement. In his second match Zayed was named as a substitute as Persepolis faces fierce rivals Esteghlal. To give you an idea of how significant this rivalry is, it is the biggest derby in Asian football. It has also been named as the 22nd biggest derby in world football so I think it’s safe to say that it’s a pretty big deal. Zayed had only played about 10 minutes as a late substitute previous to this match so he was still very much an unknown quantity to Iranian football fans. That was all about to change.

Picture the scene: Persepolis are down to ten men and are trailing 2-0 with less than ten minutes to go. Fans are flooding out of the stadium in anger, players and coaching staff alike are looking for inspiration from one source or another. New boy Éamon Zayed strips down to his kit and enters the game in search of a consolation goal at best. He later revealed that the last thing his manager said to him before sending him on was to “Go on and make an impact.”

In the 82nd minutes, mere moments after coming on, as fans continue to leave the stadium, a long and low through ball is played beyond the Esteghlal backline. Zayed finds himself one-on-one just minutes into his Persepolis career. He remains composed and coolly finishes past the Esteghlal and Iranian first choice ‘keeper. Celebrations are minimal and Zayed runs straight back towards the halfway line gesturing to the crowd in an attempt to lift the atmosphere.

One minute later the ball finds itself out by the right hand touchline, about 25 yards away from the corner-flag. The ball is hopefully hit into the box where Zayed is lurking. He leaps upwards and heads home the equalizer. The fans go crazy. They are obviously delighted that they have just seen their team come from two behind to clinch a draw against their fiercest rivals. I’m sure at this point both teams would have gladly taken a point each.

Zayed had other ideas.

Esteghlal had a free-kick about 35 yards from goal, in the centre of the Persepolis half. At this stage every Persepolis fan was biting their nails, begging for the referee to blow his whistle for the last time. It came to nothing.

In the 92nd minute of the derby, Persepolis had the ball in the left corner of the Esteghlal half, surely they’re just going to run the clock down and celebrate a point after this dramatic comeback? No. A hopeful ball was hit low into the box and it found the run of who other than Éamon Zayed. With his back to goal, he brilliantly turned the Esteghlal defender, leaving him dead on his feet, before coolly slotting home his third goal. The stadium erupted. Fans, coaching staff, and players alike lost their minds. Substitutes and members of staff began to run towards Zayed in jubilation, before realising they were halfway across the pitch and turning back to the dugout again. Fans leaped around the stands in disbelief. They must have thought they were dreaming. Players of Esteghlal and Persepolis too were left in awe on the pitch. One clip shows a Persepolis player walking around as if he has no idea what has just gone on. He could not have possibly wished for a more dramatic outcome to this game. When he walked onto that pitch, nobody knew who he was. When he walked off, he had just inscribed his name in the history books of Persepolis FC.

He later described it as a “Fairytale ending to the match.” It certainly was. Éamon Zayed had gone from playing in front of anything between 1,000 – 4,000 at a League Of Ireland game to scoring a hat-trick in the biggest game in Asian football in front of 90,000 fans. It was the kind of things that dreams are made of. I’m sure he expected to wake up at any minute. The following morning he must have thought it was all just a dream. This performance did not go unnoticed on the global stage. Goal.com named him as their World Player of the Week.

Zayed said about that night:

At the stadium the whole place went mad. I’ve never seen anything like it. On the bus players were coming up to me kissing me, hugging me, telling me that I didn’t realise what I had just done.

When he got back to the hotel in which he was living for the duration of his six month contract, he received an unusual invitation:

When I got back to the hotel there was a wedding on and the people wanted me to join them as a special guest. An old man offered me $100. He told me how grateful he was and that he wanted to give me a gift. And this being Iran, it wasn’t the drink talking.

Zayed also mentioned in an interview with The Irish Times that people have come up to him in the streets of Tehran, offering to buy him dinner, as a gesture of their gratitude for that hat-trick.

Since then, the goals have not dried up. He has gone on to score two more hat-tricks for Persepolis. One coming in a 6-1 victory in the Asian Champions League, and one coming in a 4-3 defeat to Rah Ahan. His habit of scoring hat-tricks earned him the nickname – ‘Mr Hat-trick’ in Iran, one that I’m sure any striker would love to have.

He has since clinched a new contract for the 2012/13 season in Iran, and has gone on to describe his move to Persepolis as “One of the best decisions I have made football-wise.”

Who knows what lies ahead for Éamon Zayed, one quarantee is that he will not be forgotten quickly by supporters of Persepolis, and is likely to be the cause of regular nightmares and sleepless nights for players and supporters of Esteghlal.