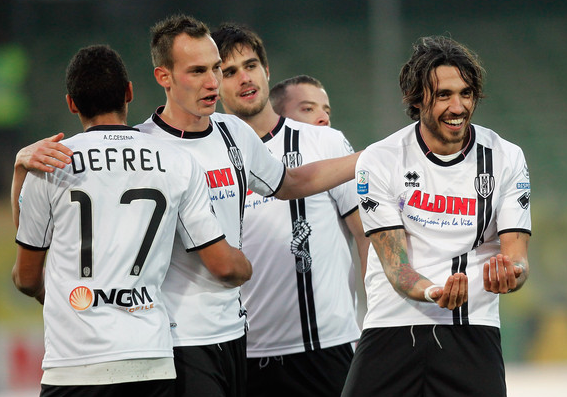 When dealing with Italian football, it is often best to expect the unexpected. After all, this is the homeland of mavericks like Mario Balotelli and Antonio Cassano, the country where Cagliari can play their home games 1000 kilometres away in Trieste and where Maurizio Zamparini makes 27 managerial appointments in 12 years as owner of Palermo.

However, even the most well-versed calcio follower would have been somewhat taken aback by the accomplishments of A.C. Cesena in the past year. Despite beginning the 2013-14 season on the brink of bankruptcy and spending a chunk of the campaign under criminal investigation, the club clearly needing help with bankruptcy is having a less than pristine season. Regardless of this, the team from the Emilia-Romagna region of northern Italy won an unlikely promotion to Serie A via the play-offs in May.

A season that had begun with anxiety and despair ended with joyous celebrations and hope of a brighter future and, a little over a week ago, things got even better as Cesena marked their return to the top-flight with an impressive 1-0 victory over European hopefuls Parma.

Ever since relegation to Serie B in the spring of 2012, Cesena have been beset by financial problems, a worrying predicament in Italy where it is relatively commonplace for smaller clubs to go bust amid intractable debts, with second-tier sides Siena and Padova folding this summer. Under previous owner Igor Campedelli, the Seahorses accumulated huge arrears and, even with the increased matchday revenue and television income garnered by a two-year spell in Italy’s top division from 2010 to 2012, the club struggled to balance the books. When Cesena were demoted from Serie A with just 22 points, there was real concern that a 72-year history may be coming to a lamentable and avoidable end.

Orienta Partners, a financial consultancy firm, were called in to help to avert a crisis. The debt was restructured and the company managed to attract new buyers for the club, Giorgio Lugaresi – the son of former Cesena owner Edmeo – heading a consortium of local businessmen. ‘Without our intervention’, Lugaresi later exclaimed, ‘Cesena would be gone’.

The new financial backers were certainly welcome, but Cesena were not out of the woods yet. The 2013-14 campaign began with some supporters and stakeholders calling for an end to the pouring of money into a desperate and seemingly irretrievable situation, with many preferring to see Cesena default and start from scratch debt-free at the bottom of the football ladder. In February, a criminal investigation was launched to examine allegations of fraud against the club during the Campedelli era, while it was also revealed that €35 million was still owed to various creditors. Even Lugaresi was not confident: “alone, we cannot do it. Perhaps we can put patches over the issues for the short-term, but not the long. We need more help”.

Against this backdrop, it is remarkable that Cesena managed to mount a promotion push. Results in the first half of the season were mixed, the Seahorses drawing 10 of their 21 games and recording disappointing home losses to Padova and Virtus Lanciano, but after the winter break the side appeared revitalised and began to turn draws into wins just at the time that their off-field problems began to intensify.

Notwithstanding an untimely loss of form leading to three consecutive defeats in April, Cesena cemented their play-off place with two games to spare after a battling 2-1 win at Reggina. A narrow aggregate defeat of Modena secured their place in the final, where the favourites Latina were overcome 4-2 over two legs. Cesena – with, according to Lugaresi, ‘our motto of pride and sweat’ – had somehow won promotion to Serie A in the most tumultuous of years.

Having come so close to the abyss, the Seahorses’ followers are simply grateful to still have a club to support and, with agreements now in place that will see the debts repaid in monthly instalments over the next decade, Cesena’s long-term future finally seems secure. The determination to enjoy an unlikely return to Serie A is thus high, but Lugaresi and Pierpaolo Bisoli, the manager now in his second spell at the Stadio Dino Manuzzi, are ambitious and determined to ensure that Cesena do not merely make up the top-division numbers.

Survival, though, would be just as miraculous as the achievements of 2013-14. Despite the defeat of Parma, Cesena’s squad is limited and Bisoli will be relying on his players’ team spirit and collective organisation to overcome richer, more talented rivals. Given their recent economic woes, Cesena took a sensible approach in the transfer market, focusing on loans and free transfers to bolster the group: Nicola Leali, the highly-rated young goalkeeper, has been borrowed from Juventus, with defenders Stefano Lucchini, Massimo Volta, Hordur Magnusson and Daniele Capelli also arriving on similar short-term deals from fellow top-flight clubs. Andrea Tabanelli adds creativity to the ranks of a side who relied on functionality more than flair last term, while Brazilian central midfielder Ze Eduardo is another exciting acquisition.

Even in Serie B, Cesena struggled for goals – scoring just 45 times in 42 games – and their promotion-winning campaign was largely built on a watertight backline. The victory over Parma saw the Seahorses line up in a configuration that will likely become this season’s template: Cesena’s 4-3-3 became a 4-5-1 without the ball as wide men Guido Marilungo and Franco Brienza dropped back into midfield, and Bisoli’s side focused on being hard to break down and soaking up pressure before launching forward quickly on the counter.

Emmanuel Cascione and Manuel Coppola are key in midfield and will be expected to break up play – with the latter also competent at carrying the ball forward on the break – while Marilungo’s lightning speed will be important in attacking transitions and penalty-box menace Alejandro Rodriguez relied upon to finish moves off. There is also the possibility of switching to a 3-5-2, perhaps against opponents fielding two central strikers, and Cesena should be one of the more tactically adaptable teams in the lower half of the division.

Nevertheless, it is likely to be a long, hard season for il Cavallucci Marini. The squad has very little experience at the highest level, and Bisoli’s own time in Serie A has been hugely disappointing, the 47 year-old sacked from posts at Cagliari and Bologna after just a few months in charge of each saw both clubs floundering in the relegation zone. Strength in depth remains an issue despite a decent number of players on the books, while tough games against Lazio, Juventus, Inter, Milan and Roma await Cesena before the end of next month.

Nevertheless, the city is a much more positive place than just twelve months ago, and there is a belief that even if relegation cannot be avoided this season, Cesena will be able to bounce back stronger in the coming years now that their finances are in order. That is not to say that they are already down, though, and, as Parma found out, a trip to the hostile Stadio Dino Manuzzi – a tight, compact, English-style ground that produces fantastic atmospheres – is not really something to be relished. The odds, moreover, were also heavily stacked against the Cesena last season, and Bisoli’s side is one that thrives on being underdogs.

“I was the only one who believed [we could do] it”, Lugaresi said of last season’s promotion. Many were writing Cesena off before a ball had been kicked this year too, but that is exactly how they like it.

2 thoughts on “From bankruptcy to ecstasy – Why A.C Cesena are happy to be written off”