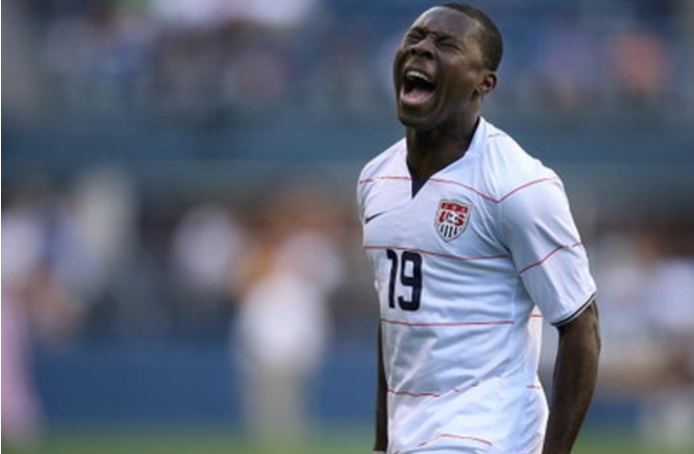 He’s a player that’s been on everyone’s minds for the last few years but every time he’s been mentioned he just seems to fall further into the abyss. From being regarded as a teenage prodigy to ending up as a washed up, flamed out 22-year old who now plies his trade with Turkish second division side Caykur Rizespor, things couldn’t have turned out any worse for the lad who was once touted as the next big thing.

Freddy Adu had a lucky passage into America. When he was just eight, his mother had managed to win a competition for a Green Card and so, Adu and his family moved to Maryland in the US, leaving his friends and family behind back in Ghana. But he didn’t care. He just wanted to play football. And he was spotted almost instantaneously. A local soccer coach had been dumbstruck by Adu’s talents and he asked Adu if he’d be willing to play with boys that were several years older than him. He wilfully obliged. It was a big step for the young kid from Ghana but he was enjoying it nonetheless. He was subsequently chosen for the U.S Olympic Development Programme in an under-14 tournament that competed against youth squads of teams such as Lazio and Juventus of Italy. Freddy helped the US side win the tourney and also boasted the feat of top goal scorer as well as being awarded the tournament’s MVP trophy. He achieved all this as a 10-year old. It was simply stunning. His poor mother was then bombarded with calls from various clubs and agencies trying to get their hands on the teenage phenomenon. But as each offer came through, she’d turn them down. “I would get ten calls a day, even at work,” says Emelia, who was working as a cashier at Home Depot at the time. “’Are you Freddy’s mom? Why didn’t you take the deal?’ Sometimes I cried at night thinking about it.”

Emelia mentioned that education was the main anthat she sought a move to the US as she didn’t think the schooling system in Ghana was doing her sons enough justice. Freddy was just six at the time and he was so keen on his football (labeled soccer in America) he’d often improve his skills in barefoot pickup games on a – as Sports Illustrated reporter Grant Wahl describes it – “pebbly, sand-covered field against men three times his age”. Freddy recalls about how they’d put him in games and they’d purposely foul him. “It was almost like they were teaching me to be tough,” he said.

Adu’s progression through the ranks was rapid, to say the least.  Yet another offer had come in for Freddy to Emelia but this time, instead of resorting to the usual denying straight-up process, she said yes. And it proved a fantastic decision. 13-year old Fred was allowed to join the US Soccer Federation’s residency programme at the IMG Academies in Florida. There he could train with the top 30 under-17 players in the country while completing his high-school studies at an accelerated pace. He continued his development at the academy and it wasn’t long before he was receiving glorified tributes from his colleagues. “He’s awesome,” says then teammate Corey Ashe. “You don’t see a 13-year-old doing step-overs and Maradonas and stuff, and he does them. He’s a cool kid, too, always smiling, always positive. A lot of the guys have taken him in and looked after him.”

Freddy was one of those kids who was great at every sport he tried his hand at. “In his first organized basketball game two years ago, a jayvee contest for The Heights School in Potomac, Freddy scored 28 points,” wrote Grant Wahl. “On the first golf hole he ever played, a 370-yard par-4, Freddy reached the green in two and two-putted for par. In his first art competition as a fifth-grader, his drawing won the top county prize.”

He was so determined to achieve in football that he’d often watch himself back, including watching himself on tape after an U-17 tournament that December, and analyze where he could improve his game. He was easily the competitions most impressive player and he constantly wowed fans, foes and even players on his own teams nearly every time he received the ball. It was a classic case of what he touched turned to gold. But, as we all know, at this point, if you’re talented, you’re a marked man. In one game where Freddy was playing, a single defender targeted him no less than five times within the opening twenty minutes. “This happens all the time,” Freddy said afterward, holding an ice pack on his bruised ankle. “Once your name gets out, people just want to crack you.” I’m sure Lionel Messi knows all about these particular situations.

Adu is fairly ambitious to say the least and he couldn’t help but mention the dream when speaking in 2003. “I see myself in a World Cup Final for the USA, playing against a top-notch team everyone picks to win,” he says. “And we just come out and blast them. One day when I’m holding that trophy, someone’s gonna take a picture. Oh, man. That is going to be huge.” Come 2011, Adu couldn’t help but think where it all turned pear shaped.

It wasn’t long until he signed his first professional contract – at just 14, with MLS outfit DC United. Within the month he made his debut, Adu became the MLS’ youngest ever scorer, netting in a 3-2 loss to the Metro Stars. He finished the season with five goals and three assists in 30 appearances. However, as the years progressed he continually flattered to deceive and after a failed move to Real Salt Lake, Benfica decided to take the risk on the then 18-year old and he moved to Portugal in a bid to revive his quickly flailing career in July 2007. He spent one season at Benfica, averaging a goal every four games, before being loaned out to French Ligue 1 side AS Monaco, where he failed to muster even a single goal.  Time was running out for Fred and having been of no use of Benfica, they once again reverted to the tactic of loaning him out to Portuguese division two side Belenses and then Aris Thessaloniki of Greece for the 2009/10 campaign. It was his last chance to impress before Michael Bradley chose the US squad to travel to the World Cup in South Africa but, as we’ve come to expect, he once again failed to leave a lasting impression and ended the season with a mere two goals in fifteen appearances.

After a mixed 2010/11 campaign spent on loan at Caykur Rizespor in Turkey – in which he scored four goals in 11 games, he was a surprise choice for the American squad who were to compete at the Gold Cup in June of 2011. It was a risky move from USA coach Bob Bradley as Adu hadn’t played international football since 2009 but it proved he was a risk worth taking. Adu was introduced midway through their semi-final bout against a Panamanian defense which was proving hard to break. Adu’s introduction breathed new life into the American offence and it was the 22-year old who provided the pass needed for the winning goal. Adu received the ball in the middle of the park and with a swipe of the left foot, hit a scintillating, defense-splitting ball out right to teammate Landon Donovan who squared for Clint Dempsey to score the winning goal. As well as providing a helping hand, Adu also wowed the crowd with his bursts of pace and skill as well as his collection of neat passes. It was a refreshing sight to see Adu hit top form, having been virtually forgotten about since he left America for Portugal four years prior.

Beginning life as a professional footballer at 14, although it may seem an incredible achievement, isn’t as rosy as its portrayed. For starters, you miss out on the development that’s needed to nurture your ability. That’s why most football players don’t usually take full part in the first team activities until they’re 18 or so. As well as the lack of development, you’d also become rather incompetent at keeping up with your studies at school. The schoolwork is just as if not more important than the football itself. Good results in school equals a good future in the employment industry if you don’t succeed in the football world. Adu however, has missed out on both those necessities, having moved on from his clubs every one or two years, and now finds himself in a bit of a pickle.

What remains is whether or not the American can rediscover form and hopefully attract enough interest from some of Europe’s top sides to reclaim the status that at one point in his career had his name mentioned in the same breath as one of football’s greatest, Pele. Beginning at such a young age, its understandable that Adu never really had a chance to develop mentally or physically, as he was thrown into the thick of things at just 14. This seems to have halted his progress but he’s still somewhat considered as an enigma and he can take advantage of that. If he can’t, well then he’ll have to resort to playing in the doldrums of European football for the rest of his far-traveled, much-publicized career, something neither he nor us ever envisaged he’d be doing after those famous adolescent years.