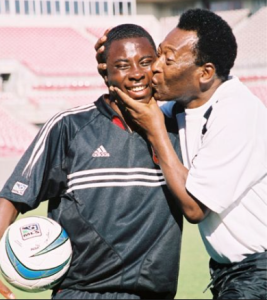 This is the closest I ever got to greatness.

Not that anyone cares but Freddy Adu is, once again, without a team. At the ripe old age of 25, Adu’s football future is bleak at best. How is it that a talent considered by many to be so remarkable at such a young age cannot even make a lowly Serbian side?

The truth is: Adu was never truly remarkable to begin with. Was he potentially remarkable … yes … maybe? The only thing remarkable about Adu’s football career is that there were people who actually thought Adu, at the tender age of 13, was remarkable at all.

This is not a story of Adu’s rise and fall. That story is so well documented, so thoroughly beaten even the dead horse feels sorry for Adu. This is a story about everything and nothing at all with regards to Adu.

America has an insatiable desire to crown the next would-be king or flush the same youngster down the sewer when they become a “bust,” whichever comes first. American sports media’s habit of placing wholly unreasonable expectations on any young person they can find with professional potential has ruined more young talent than can be counted. Our penchant for eating our own athletic young would lead someone to think we were trying to win some sort of sick contest.

Who on planet earth would ever be so ignorant and devoid of compassion, intelligence and basic common sense to place the most ridiculous set of expectations on a child not yet 12.  I guess people named James Dator and CNN.

Google any combination of the words (young, athlete, bust, talent, etc.) and you will lose count of how many different athletes from all sorts of American professional sports show up. While the predominant number of athletes comes from American staple sports such as American football, basketball and baseball, one name shows up on every list: Adu.

I am sure if I wasted my time, I could find out who the sports writer was back in 2002 or 2003 who wrote short-sighted headlines about how Adu was “the next Pele.” Like lemmings to a cliff, we jumped at every article bloviating Adu.

Just what is the definition of a “bust”? There are countless reasons why any number of athletes fails to live up to expectations. I am not sure what Webster’s Dictionary says in this regard but here is my definition:  Bust \’bəst\: a talented young athlete, who is unwittingly singled out by sports media for seemingly having professional-like talent at a ridiculously young age.

Said young athlete believes said sports media, develops ego, possibly even justifies said talent, temporarily, in athletic performances. Said young athlete gets lots of money, stops working, stops developing, starts to perform poorly and is out of the sport completely at what should be his peak. Adu, sadly, fits this definition. He is not the only one. But it never had to be this way for Adu.

Anyone who has watched young soccer talent play at the highest level has seen their fair share of boys and girls who are simply better than the rest. But talent, even remarkable talent, is not always what it seems to be when it comes to watching young players between the ages of 11 and 14.

There is one factor, among many, that influences relative greatness amongst one’s peers at a young age that many people often overlook: puberty. Adu detractors accounted for his unusual size at age 13, and relative talent, due to their idea that his birth records were inaccurate and that Adu was, in fact, older than his peers. Puberty fools many people.

Youth soccer teams, male or female, with players between the ages of 11 and 14 are full of kids in all stages of the chaos we call puberty. All of us remember the boy who was shaving at 13 or the girl who had full breasts by 12. The difference between young athletes who have gone through puberty by age 12 and those who have not is quite staggering; it is really like watching young men play against boys.

So it is not surprising that a young, physically mature Adu was running rip shod over the pre-pubescent boys of Maryland youth soccer. I see it first-hand every weekend.

Was Adu a great young footballer with tremendous potential?  Yes.  Adu was intuitive, quick, had excellent technical skills and had adult-like poise on the ball.

But he was a 13 year-old man-child who just happened to win the early puberty lottery and was playing against a bunch of boys who were just … a bunch of boys. It was easy to look remarkable.

On first blush, one might find it hard to believe that a guy whose adult height of 5 feet 8 inches was a man-child in his youth. But when you reach your adult height at age 13 and are playing against a group of boys who are not quite 5 feet tall; you really are a giant among the Lilliputians and it is very easy to stand out as a star.

So it is not hard to see how anyone could be fooled to think this kid could be “the next Pele.”  There was only one small problem with the sports media’s eager assessment: Adu was not the next Pele … not even close.

To be fair, Adu performed above his age when he first entered the MLS (Major League Soccer) at age 14.  This was due to many things including everything aforementioned about his soccer skills and early puberty, but two things made all the difference in the early Adu years: coaching and confidence.

When Adu entered MLS, Polish icon and D. C. United Coach, Piotr Nowak took Adu under his wing and ensured that this potential prodigy thrived.  Nowak did it again with Adu at Philadelphia Union.  Adu’s solid playing statistics under Nowak speak for themselves.  When Adu was paired with a coach who really cared about his development and played him every match, his confidence and performance soared.

In time, Adu really believed the hype being created around him and actually lived up to and exceed the hype for a short while. His 24 goals in 87 appearances for D. C. United were no fluke. He really did score those goals as a 14, 15 and 16 year old against professional men. Yes, MLS circa 2005 is not the MLS of today, but let us not diminish the goals of a 15-year-old against professional men in any league.

So while Adu had some good years in MLS and on the US youth national teams on account of great coaching; it is not surprising the real reason for his success was wildly overshadowed by the sports media machine and the MLS who could not let their self-created “next Pele” and pitchman for Sierra Mist and Nike fail.

Then reality struck. Adu was traded to Real Salt Lake and, very quickly, headed to Portuguese giants S. L. Benfica because his handlers thought he was too good for MLS and there was more advertising money to be made on this young mans back. Adu’s woefully young ego agreed and he has been paying the price ever since. 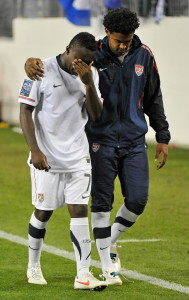 Gone were the coaches who looked after him, gave him tons of playing time and developed his talent.  Adu was no longer in the United States, no longer playing against inferior talent, no longer being protected by a league who took special interest in him. Adu entered the big, bad world that is professional football and the wheels came off.  He has not found them since.

Benfica realised that Adu was a “work in progress” and loaned him out rather quickly for the following four seasons. Benfica saw what few in America cared or wanted to see; Adu was an above average player with serious potential but needed serious development, physically, technically and mentally in order to play top-level European football.

At the end of the day, Adu drank and truly believed in the Kool-Aid that was the hype in his talent and pre-ordained future. But the truth is; Adu never gave himself a shot at greatness after leavin g D. C. United. Was he lazy … did he lack a work ethic … was his ego too big for his training shorts?

Who knows, but perhaps he simply was not the great talent everyone led him to believe in the first place. Even if he was; potential talent that is not fully developed through hard work and dedication to one’s craft is just “potential” nothing more.

Consider the facts. At D.C. United, Adu played in 87 games in three seasons.In the eight seasons since his D. C. United days, and in a very sad coincidence, Adu has played in a total of 87 games. To put it in perspective: Adu has played in roughly 8 games per year for the past eight years. It is no wonder he is a shell of the player he once was.

It is hard to believe he will ever get back to his once promising form. Players become great because they play all the time. No one improves sitting on a bench. 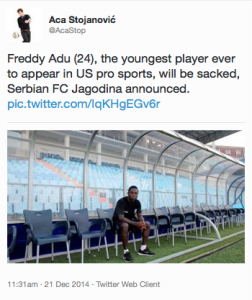 “Experience is one thing you can’t get for nothing.” Oscar Wilde

There has been talk about Adu coming back to the USA to play.  But the only legitimate offers, per the rumor mill, have been from the NASL (North America Soccer League), the second tier of American Soccer. Logic would tell Adu that if he aspires to any sort of football future, he needs to join any team willing to play him on a regular basis.

But Adu, already the butt of soccer jokes everywhere, is probably too embarrassed, too prideful to show his face again in America, especially for a second division team.

It is too bad as I believe the final chapter of the book on Freddy Adu, professional soccer player, is yet to be written. If he allows his ego the opportunity to start all over, to actually play meaningful minutes in 25 to 30 games per year with a second division NASL team; he has the ability to regain his technical talents, form and, ultimately, his confidence such that he could compete for a spot on the USMNT in four years.

At 25 years of age, Adu still has a football future in front of him … if he wants it and is willing to work at it.  No, it will not be the future some sports idiot told him he would have at the tender age of 13. The most Adu can hope for, if his ego allows it, is to play second division football in the United States so he has a chance to work his way back into the MLS. Absent this, then the book on him is already closed.

If you have a son or daughter who is among the many elite youth football players in America today or you know someone who is, do them a favor by not telling them they will be the next Messi, Ronaldo, Wambach or Hamm.

Instead; tell them to continue to work hard being the best they can be. If you can, get them on teams with coaches who really care about developing their talent regardless of the win/loss record.

Lastly, build their confidence while also being realistic that success in football, as in life, comes in many forms, takes many paths, demands a lot of hard work and remind them that they are only as good as their last practice, last game.

Perhaps Adu should have read Oscar Wilde instead of the press clippings written by mindless American sports writers.  Perhaps Wilde was speaking directly to Adu, through the ages, when he said:

Be yourself; everyone else is already taken.

If only Freddy Adu became “the next Freddy Adu” who knows what we would be writing about today.

9 thoughts on “Freddy Adu about everything and nothing at all”