“It’s kick off time at the Kaz, let’s make some noise.” 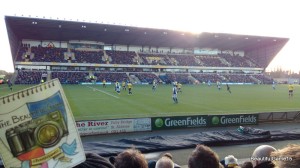 It’s a tense opening ten minutes, the first real chance going to BR. When OXU do get forward people jump to their feet, followed by the bang of their seats flipping upright, straining their necks trying to catch the action at the opposite end of the pitch.

BR’s number 35 is small, quick and very easy to go down. It’s not long before his ability to crumble to the floor at the slightest hint of an opposition player being anywhere near him, starts to annoy the home fans “wanker, wanker, wanker”.

When he picks himself up glaring at the crowd, this only riles them up more. The referee also gets an earful, the fact he keeps blowing up every time he “dives” as one fan puts it means he gets a song all for himself “you don’t know what you’re doing!”

“Oxford United FC are by far the greatest team, the world has ever seen.”

OXU register their first shot, with about thirty minutes on the clock, a low hard drive which is tipped around the post, this draws another mass chant “yellow, yellow, yellow”.

There is still an unwavering and palpable sense of tension around the ground, as the whole place “oohh’s” and “aahh’s” in unison, squirming in their seats whenever a move breaks down or a half chance goes begging.

It’s very hard for me to describe quite how earth shatteringly loud the fans are on occasions, without trying to sound over-dramatic, but you could feel it “YELLOW, YELLOW, YELLOW”.

“Ahhhh the beefy goodness” says a fan a few rows in front of us, as he thrusts a cup of Bovril under the nose of a friend.

As if it was written in the stars, there is an undeniable predictability about BR’s goal, it was coming and I’m sure everyone knew it would have something to do with the much despised number 35.

His ability to lose all control of his legs, falling to the ground like a stropping toddler in a supermarket pays off when he is ‘fouled’ in the box, I use that word in the loosest possible sense, the referee laps it up, penalty!

The spot kick is dispatched clinically in front of the ‘Ultras’, the BR players are hardly reserved in their celebrations just a feet away from the OXU fans, but it’s the man in charge who gets the most grief “to the referee 1-0”.

The visitors from Lancashire at the other end of our stand make their first real noise of the day, the blue smoke of a smoke bomb drifts across the crowd and fills the air with it’s distinctive smell.

Regardless of going behind, the home fans rally “come on Oxford”.

BR don’t seem to be here to play football, a fan behind us quite rightly describes it as, “unattractive”. Committing a constant stream of small, game stifling fouls, BR stop OXU getting into their rhythm, never giving them the chance use the abundance of pace they have in their team.

The referee has his whistle in his mouth every other minute, “let it play shouts” Tom. When he does blow in favour of the home team, he gets a sarcastic cheer.

Whenever enemy number one gets the ball, he is suitably singled out “he’s gonna dive in a minute”.

In added time there is an overriding feeling of doom when BR score again, the fans feel that the referee has missed a glaring foul in the build up, one going as far to re-enact the action performed by the BR player who won them possession.

Once again the away fans awake from their relatively dormant state, no smoke bomb this time, but a few whirl their scarves above their heads, “Que Sera, Sera, whatever will be, will be, we’re going to Wembley”.

The goal has made a lot of people’s minds up about going to get a pint, and the bang of the seats this time is when scores of people leave to find solace in the bottom of a plastic pint glass. One fan is quite sure that BR “are not going to Wembley” regardless of what their fans think. 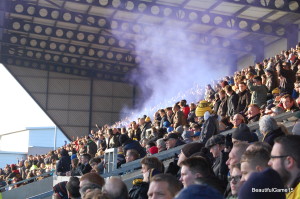 Tom’s search from refreshments, turns into a bit of an ordeal, as the concourse is heaving, people struggle through a bottleneck, and the fans start to lose patience with the wait, “what the fuck is going on?”.

As I wait one group have decided that the two goal deficit is enough, and make a b line for the exit, discussing plans to find more drink.

When Tom does finally appear, looking beaten, with the intermission all but exhausted, we both down our warm fizzy pints the quickest a person ever has.

“Don’t tell my mates” was the plea of the OXU fan Tom had spoken to in the queue for a drink at half time. His dirty little secret was that he had put £100 on BR to win, his justification was that it would “pay for my night out”.

BR’s action plan for the second half is much the same as the first, creating a stop start, stop start game which is verging on the tedious.

The biggest cheer of the day from the home fans at least is when naughty number 35 gets a yellow card, “cheating Jackson got his just desserts” says an animated father to his young slightly bemused looking son.

When OXU manage to break out, nine times out of ten on the counter attack, it’s halted by blatant shirt pulling, or a cynical foul, and the fans have had enough, “you dirty Northern bastards”.

Tom is caught up in the drama waving an imaginary card towards the pitch, how unsporting of him.

Although we can see the home players are full of endeavour, spirit and plenty of running, their final ball at the crucial moments, holds them back time after time.

In this modern day of commercial money obsessed football, where anything and everything has its price, we see something that forces us into a double take, a sponsored substitution

After each change, the usual protocol of reading the name of the player coming off and the player coming on occurs and then the announcer’s voice changes, to that of a cheesy radio advert informing us that is had been “brought to you” by some local hotel.

The final nail in the OXU FA Cup dream coffin is BR’s third goal, which comes from a direct free kick on 76 minutes. This sparks an exodus, one fan from our row mutters to himself as he squeezes by “I can’t handle this”.

The BR fans sing of Wembley again, and jibe the leaving fans, whose number I can’t quite believe, “cheerio, cheerio”.

Despite the painful sight of seeing your team undone by a bullshit penalty, and not really ever being in the game, the ‘Ultras’ don’t leave and don’t stop “we love you Oxford we do”, they even have time to mock the BR fans “3-0 and you still don’t sing”. 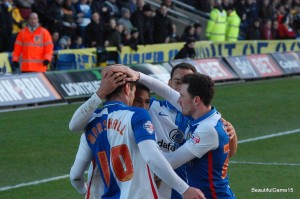 After such a storming result against Swansea in the previous round, some people, although I’m sure they would not want to admit to it, must have thought that a tie against a struggling Championship side would have meant progression to the next round was on the cards, but since the first whistle it’s never looked the case.

I think you could even say some around us are even getting frustrated at the team’s performance, “come on” a few say.

Moments before the final whistle, the announcement of the Man of the Match brings people to their feet. Once the game does end talk quickly turns to that of the Johnstone’s Paint Trophy Regional Final against Millwall in the coming days “90 minutes from Wembley” says the stadium announcer.

“George Baldock – Goodbye For Now” says the banner revealed at the back of the ‘Ultras’ stand as the players applaud the fans. A few days before the match, Baldock on loan from MK Dons had been recalled to Stadium MK.

With 39 appearances under his belt, he had become a firm fan favourite “Georgie Baldock we want you to stay”. He removes his shirt, tossing it to a fan.

Outside, people streaming in all directions, the nearby car park of a cinema is gridlocked, one fan thinks you must be mad to “go to the cinema on a match day”.

A quick visit to the club shop, which is like a scene similar to that of a supermarket before a hurricane, it’s been stripped, bare rails and empty coat hangers. They are also out of pins, much to Tom’s annoyance.

Such are the crowds that the buses back into Oxford politely apologise as they pass us “sorry bus full”. Back at the station, after failing to find a suitable birthday card for a friend in WH Smith, we don’t have a long wait for our train.

To see what the fan base of a League Two team are capable of is what made the biggest impression on us today, it once again shines a shameful light on so many of the country’s bigger teams fans.

Why are these teams able to organise themselves, but so many in the top flight can’t?

It’s not just Germany, Italy and South America that supporters can take inspiration from when it comes to display and support, why not try a little closer to home, why not get yourself down to The Kassam.

If you missed the first part of the trip to Oxford, you can read it here.