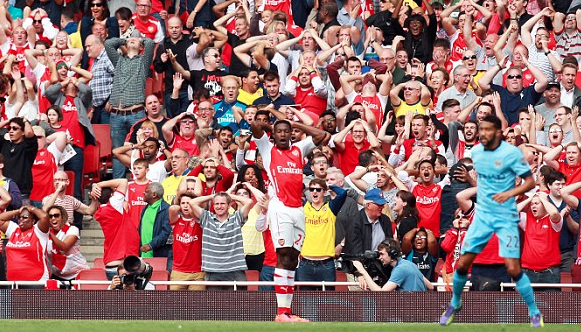 Arsenal’s rocky start to the season had left much to be desired before their disastrous trip to the Signal Iduna Park on Tuesday night where their almost-thrashing at the hands of a ruthless, but not quite clinical, Dortmund side surfaced many of the issues that have perhaps been masked by a fair share of luck in the opening stages of this season for Arsenal.

From scraping qualification to the Champions League against a Besiktas side who, arguably, they should’ve been beating extremely comfortably, to picking up just one win and three draws in their opening four Premier League games – with three of these six points being earned with stoppage time goals – and to last Tuesday’s almost comically predictable collapse against one of the bigger sides, things are markedly less rosy at The Emirates than a mere four weeks ago.

Alexis Sanchez, Callum Chambers and a convincing Community Shield victory were all contributors to a genuine belief that this season could be the start – or continuation, depending on your point of view – of something special for the Gunners.

Whilst on paper the results have not been appalling and indeed Arsenal are one of only two remaining unbeaten teams, they could easily be expected to have performed better both in terms of results and performance in all but the Manchester City and Aston Villa games, and to be honest, given the show of character Arsenal displayed in coming back from 1-0 down when perhaps this time a year ago they would’ve lost all hope, a lot of fans are rightly disappointed City didn’t translate into three points as well.

Added to that, on Friday Arsenal have just announced record cash reserves of £175 million (excluding the emergency debt reserves) and the bubbling feelings of frustration and anger at the way the club is being managed/run is threatening to once again boil over.

It seems as if Arsenal are in some sort of unbreakable cycle at the moment. A poor run of results is followed by anger and pressure on the management, which is duly responded to well and Arsenal pull it out the bag – be it via the FA Cup, or a mad dash for fourth place – leading to optimism going into the new season, before failing to address the glaring issues in the transfer market – and repeat. Despite huge pressure from the fans to sign a world class striker, a holding midfielder and if possible, bolster the defense – there was only one deadline day signing coming very, very late on in the form of Danny Welbeck.

Whilst I strongly believe that Welbeck will turn out to be a good signing, he failed to put away three one-on-ones in his first two games and in both games he could have, and really should have, got the opening goal. Not necessarily a huge issue, a lot of strikers miss goal scoring opportunities, except that – courtesy of their standard of defending recently – Arsenal cannot afford to be choosy in terms of taking their chances. Against Dortmund, City and even against Everton, Wenger’s refusal to sign a holding midfielder was brutally exposed by teams that have pace on the counter attack.

There were more encouraging signs at Villa Park, with not only Welbeck getting off the mark but Arsenal showing some degree of defensive organisation, Gabby Agbonglahor was particularly dealt with well considering his pace expected to be a real issue in the game.

Furthermore, arguably more worrying than the lack of signings – that is now water under the bridge and January does still exist, although only time will tell if Wenger plucks up the will power to break tradition and actually use it – is the calibre of the players currently on the books. Mathieu Debuchy could be out for anything between six weeks and six months, it seems to change on a daily basis leaving the defensive cover scarily threadbare. As a result, Hector Bellerin was handed his first start in a Champions League match at the Signal Iduna Park.

Also on the treatment table (or just off it) are Kieran Gibbs, Nacho Monreal, Callum Chambers, Jack Wilshere, Theo Walcott, Serge Gnabry and Olivier Giroud. There are also about four or five players who look hopelessly out of form, and despite an encouraging performance against Aston Villa Mesut Özil still has a long way to go before Arsenal can consider him being ‘back to his best’ whilst Aaron Ramsey, Wojcech Szczesny and Per Mertesacker – arguably Arsenal’s three best players last season – have all had mixed starts to say the least.

The Aston Villa result was a giant leap in the right direction with several players threatening to find something half resembling form, but one win against a mid table team shouldn’t paper over the cracks of an awful performance against Dormund which suggests the team have learnt nothing from the three or four heavy defeats last season. Arsenal didn’t have any trouble beating the smaller teams last season that is what got them into the top four. In order to push on though they will need to fast reevaluate their strategy against the top teams and ideally this will have to be in a system not based around an erstwhile absent natural holding midfielder.

Surely though, now that it’s happened over five times, with the lack of midfield cover and attacking full backs leaving the defence brutally exposed to a counter attack, Wenger will reevaluate his big game strategy. Surely?