This season has seen some truly shocking kits that no right-thinking person would be seen dead in, but clubs continue to churn out some horrendous numbers in a strange battle to outdo each other. Some outfits rightly attain cult status, whether they are genuinely stylish, or just so silly you can’t despair at them, but here is my personal collection of the top ten ridiculous kits. Feel free to disagree, there are plenty of candidates… 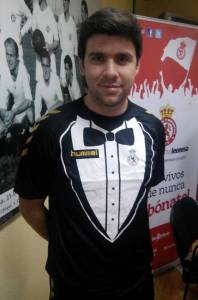 There’s being smart, then there’s this. Cultural’s flashy black tie strip does at least incorporate their colours effectively, but it doesn’t exactly bring to mind James Bond; rather a humorous student on a drunken night out.

Speaking of which, the term I spent in Leon during the summer of 2006 studying Spanish (ok, watching Cultural) didn’t exactly set the pulse racing at the then-named Estadio Antonio Amalivia.

Two very dull 0-0 draws were overshadowed by the sellout Shakira concert at the height of the honest-hipped Colombian’s popularity, so perhaps dressing them in pseudo-tuxedos is a novel way of bring some style to their play. 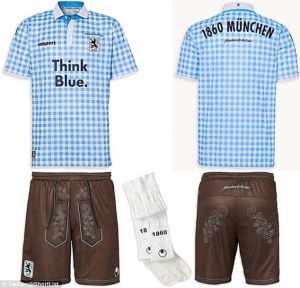 It’s bad enough seeing Franck Ribéry cavorting around in the real thing once a year for the annual Bayern Munich trophy parade/photo shoot, but to see 11 grown men in this mocked up lederhosen number all season is beyond humane.

OK, it hits the spot by paying homage to the local traditional style (if it can be called style), but there is a time and a place for this sort of tribute: in the Hofbrauhaus during Oktoberfest, not on the pitch. 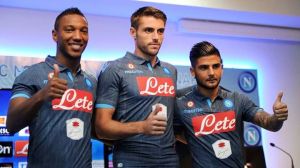 Now classy as the Germans are on the field of play, they are not perhaps so feted for their class on the catwalk.

The Italians on the other hand have a stereotype to live up to, and although Naples is the other end of the country from the fashion capital of Milan, they have a lot of explaining to do with their denim disaster.

The Village People look may suit Rafa Benítez with his penchant for dodgy facial hair, but I’m not sure Lorenzo Insigne’s immaculately styled locks will appreciate it as much. 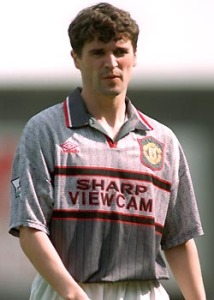 Talking of imitating real threads, who can forget this shocking abomination that was famously ditched at half time at The Dell during Southampton’s 3-1 annihilation for the more appeasing blue and white striped third strip?

Sir Alex Ferguson laughably claimed the decision was taken because the players couldn’t pick each other out, while the marketing splurge claimed it was designed to ‘look good with jeans as casual wear’. Designed by whom, the Colour-blind Hedgehog Workshop of Siena?

Even Baldrick could have come up with a more cunning plan to produce something stylish than that shocker. Thankfully, one consigned to the dustbin soon after. 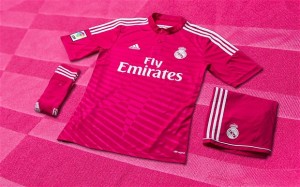 Only Ronaldo could pull it off, and even his chiselled chops matched the electric shade of hot pink when parading it for the first time in the shock loss to Real Sociedad two weeks ago.

There is a theory that the more garish the colour, the more distracted the opposition might be, and there could be a grain of truth in that. With all the millions of euros spent bringing galactico after galactico to the Bernabeu though, shouldn’t the players’ feet and body swerves be enough? 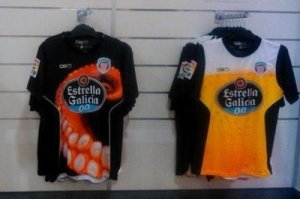 These two are just plain ridiculous – just a blatant attempt to gain ‘lad culture points’ by making their away kits like a pint of beer and an octopus tentacle. OK, to be fair, the region of Galicia does have obvious links to the sea, but Lugo isn’t even on the coast. And can it really claim to have a stronger link to beer than any number of cities with breweries?

The club sponsors Estrella Galicia are the winner here – they have effectively turned the entire shirt into an advert for their brand of beer – but the losers will be those sorry few who buy the top before realising it is the decidedly uncool non-alcoholic version they are parading on their chests. 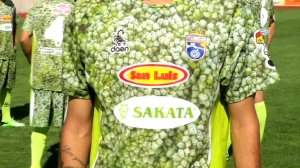 What is it with Spanish sides and food on their shirts?! At a push, as mentioned above, fans can relate to beer as a traditional accompaniment to football, and it makes a tiny bit of sense to have some octopus imagery on a goalkeeper’s jersey, but broccoli?

From a practical angle, it really would be difficult to distinguish these shirts from the pitch. It is a sad statement if the green veg really is a standout symbol of a region, as the club claim in explanation of their horrific shirt. 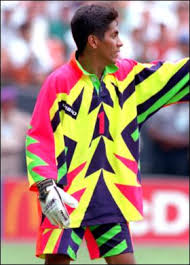 For once, FIFA actually made some sense by banning the completely sleeveless numbers that the Indomitable Lions tried out.

OK lads, we get the point, you’ve bought two tickets to the gun show, but do you really need to show off your bulging biceps that blatantly? 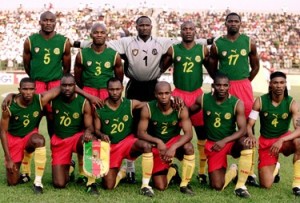 Only weightlifters in the gym could justify the need to do away with sleeves altogether, and there was no cultural reference made to the style.

I do, however, have a confession to make; in a weaker moment of my youth, I succumbed to a moment of peer pressure and bought one myself. Me, a lanky, six-foot-three pale-skinned bloke…

Thanks to The Guardian for pulling this stunning monstrosity out of nowhere. Where to begin? Somebody, somewhere, must have got drunk and thought “I know, let’s add some girly wild west tassles to the middle of a beige and gold (or vomit, depending on your viewpoint) skintight shirt and make some men wear it!” 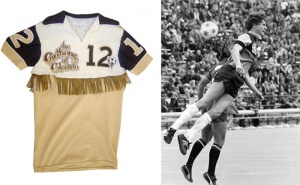 The NASL was a completely insane time, a real life Football Manager with gimmicks galore, so it shouldn’t really be that much of a surprise to see such crimes of football fashion. The one season wonders folded after only a year – the wonder being how this shirt ever saw the light of day…