Moneyball practitioners FC Midtjylland will make a January move for Czech striker Vaclav Kadlec who was once a Football Manager standout.

The Danish club, closely connected to English Championship side Brentford FC (both spearheaded by Sporting Director Rasmus Ankersen), are making what many will consider to be another shrewd transfer move.

Midtjylland (or FCM for short) recently won their first Danish Superliga title, by applying a model of statistical manipulation akin to the one documented in smash hit book and film ‘Moneyball’.

Effectively a testing ground, for techniques that are now impacting the results of English parent-club Brentford, FCM are gaming the transfer market once again, to pick up a player who was once known for his “wonderkid” status in the Football Manager series of video games.

Now 23, Kadlec has gained experience in the elite German Bundesliga, albeit, according to critics, having not lived up to his initial hype in the process.

FCM obviously see Kadlec as a player that is currently undervalued and, at the very least, capable of making an impact in the Danish top tier.

Kadlec’s move from Czech giants Sparta Prague to the Bundesliga’s Eintracht Frankfurt didn’t quite match the hype that followed his stats from, in particular, the Football Manager ’13 release.

Having joined Frankfurt in August 2013, he has found it hard to establish himself in the German top flight. He has been able to make only 26 appearances in the past two calendar years and has netted only 6 goals in that time.

Kadlec made his reputation, at the aforementioned Sparta Prague, by averaging a goal roughly every three matches played. An impressive return for a player in his late teens/early 20s.

Earlier on this year, Eintracht allowed Kadlec to return to Sparta. This latest spell in his home nation saw him register 9 goals in just 13 appearances.

Unfortunately, that form just hasn’t translated back to the higher level of the Bundesliga.

One factor in Kadlec’s poor run may be the recent managerial changes in Frankfurt. The Eagles have recently sacked, replaced and brought back Armin Veh – the man who originally signed Kadlec for the club.

FCM, on the other hand, is a much more stable club, with a robust, long-term vision. That fact combined with the less competitive standard of the Danish league should mean improved performances for the successful Czech international.

Indeed, the record books list Kadlec is his country’s youngest ever goalscorer. He scored on his 2010 debut against Liechtenstein. 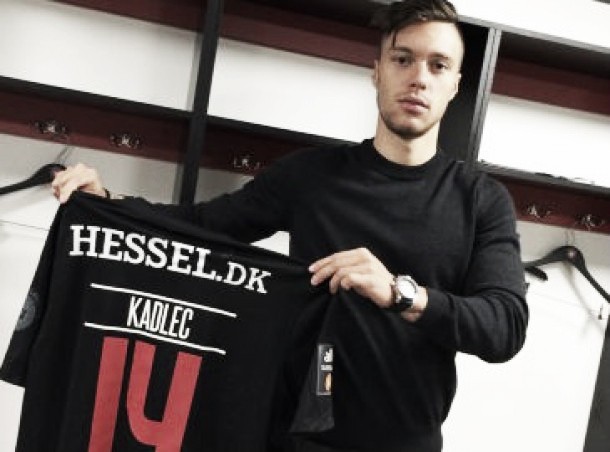 The Danish media is already running with photos of Kadlec holding the #14 shirt that he will wear for the 2014/15 champions, from January onwards.

The German magazine Kicker has reported that, when the move is completed, the fee will be around £1.4 million.

Only time will tell if Midtjylland have yet again found themselves a bargain, or whether Vaclav Kadlec is just another Cherno Samba.