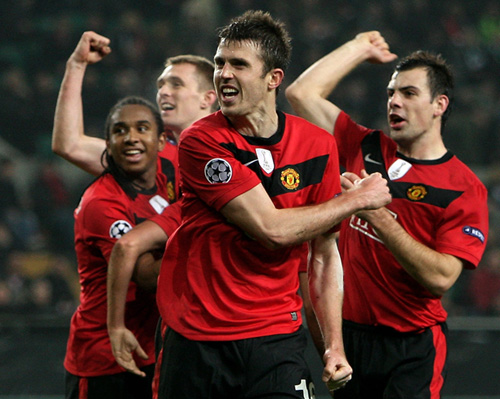 Last night Manchester United and Marseille met in the last 16 of the UEFA Champions League. Truly, it was one of the worst games the Champions League has ever produced. Neither side managed a clear cut chance on goal all night. Stifling tactics cannot be blamed; rather the enemy on the night was poor players and specifically poor midfielders.

Leaving one to ask; Where have all the midfielders gone? It might sound like a mad question but given the state of the modern game it is one of the most pertinent.

Nani is not the kind of player who will ever know how to dictate the ebb and flow of a game. As a wide player he is reliant on the service of others and feeds on balls into space for him to move onto rather than taking on the responsibility of initiating a move, so to some extent the Portuguese is innocent of the charges being brought against United’s midfield.

Rooney and Berbatov are forwards and by definition will never dictate the intricacies of a football match.

However, Gibson, Fletcher, and Carrick are all guilty of refusing to demand the ball from their team mates and in doing so they dictated that United’s defence played a fair amount of long hopeful balls out from the back.

The single most important thing for any central midfielder – be he on Hackney Marshes or playing in the Camp Nou – is that they have to move towards the ball to receive it, whilst also moving into space.

One of the first things you learn playing football is to provide angles to receive the ball. In an ideal world the player on the ball will have three options at the least. Two will be wide while one will offer down the middle.

The four players will form a rough diamond shape and as the ball moves on this diamond will reform depending upon the situation. Think Barcelona and all those little triangles they always seem to find.

This is football at its most basic. It is learned on the street avoiding broken bottles, parked cars, bullies twice your age, and lampposts. This is where ingenuity and imagination take hold, where cleverness beats physicality every time. One would almost have to wonder if it is coached out of players these days.

There is an unwritten rule in the English Premier League that a midfielder will not take responsibility and receive the ball if an opponent is within three to four yards of him. The exceptions to the rule are almost every Arsenal midfielder, Luka Modric, and Paul Scholes.

On Wednesday night, Carrick, Gibson, and Fletcher ran away from the ball, hid behind opponents, or just didn’t move at all. The end result was that United did not create any move of note in the whole game. Marseille for their part were just as bad, if not worse.

It was a sad indication of the state of the game.

Here we are in the last 16 of what is widely regarded as the greatest football competition on the planet and not only is the game rubbish but neither side can string a couple of passes together either.

The most worrying aspect of all of this is that Marseille vs. Manchester United is a microcosm of what is affecting the game as a whole.

Over the last 20 years, skilful midfielders have been marginalised and replaced by physical athletes. The general move towards 4-2-3-1 as the formation of choice reflects this as this system is built around maximising players with partial skill-sets.

In the days of yore, the formation of choice was 4-4-2. It is an incredibly adaptable set-up and can be arranged to suit any occasion but it does have a major draw back in that the two most important players in the system are the central midfielders.

For the system to be successful these two players need to be “jacks of all trades”, schemers, dictators, enforcers, playmakers, warriors, and above all else they must be imbued with a deepest knowledge of how to keep the continuity of their team going.

This might sound like a lot for any one player to do, but they are the basics of midfield play and are learned on the street long before “coaching” ever takes its icy hold.

In this modern Jose Mourinho 4-2-3-1 era, the game cannot wait for these players to develop and players who have expertise in half-skill sets are utilised instead.

The attraction for managers is that this reduces on the coaching they have to employ. A player with a defensive midfield lean is allowed to specialise in that position while his attacking counterpart.

In short the manager does not have to waste time coaching the players to learn other skills and adapts them into the system that concentrates upon the skills they already have.

Think Javier Mascherano playing defensive midfield for Liverpool while Steven Gerrard played attacking midfield. Both of these players are brilliant in their respective positions but are extremely lacking when asked to play as conventional central midfielders as they do not have all the skill sets required to take on the task.

This might seem like a common sense approach by the manager, and it is, but it also diminishes the sport as the style of the game, health of the game, and skill of the players is attenuated upon.

That is not to say that special players like Gerrard should be corralled into positions that do not suit them. One also has to wonder at players like Glenn Hoddle and how they would be looked upon in a 4-2-3-1 over the 4-4-2 they played in back in the ’80s.

When you look back at the games great midfielders, players who could do everything from the middle of the park the list is almost endless.

If you look around Europe for midfielders capable of even coming near that exclusive list you have to think hard. Xavi and Iniesta jump straight out, then maybe Luka Modric, Cesc Fabregas and Bastian Schweinsteiger. After that you’re really looking hard. Of those mentioned Xavi really stands out in a class of his own and is without doubt the greatest midfielder of his generation.

As a formation, it makes the most of players who have specialised in one midfield position while perhaps the biggest factor influencing the use of the system is the utilisation of only one forward.

Forwards are the most expensive players in the game and with 4-2-3-1 top class squad needs two to three strikers for the entire season. A manager using 4-4-2 needs at least four if not five strikers.

Economically 4-2-3-1 will spend less on strikers than other formations with that money being spent in midfield instead where key players usually work out cheaper.

What all that adds up to is that 4-2-3-1 is a cheaper system to run than others, that it is a system that finds its foundations in players with specialised positions and lower skill sets and that it is generally a system that favours physical athletes in central midfield over “players.”

It’s here to stay for the foreseeable.

I have seen the future and it’s Marseille vs. Manchester United…

41 thoughts on “Football Debate: Where Have All The Midfielders Gone?”