Even if you are still slogging it out in front of three men and a greyhound, there is nothing like a good underdog story to keep your morale up! Sadly, on each occasion that a UEFA playoff round has been used with a seeding system, ‘unseeded’ sides (drawn from pot 2) have seldom fared well.

Once at the tournament, however, history shows decidedly mixed results for those same teams.

Curiously, as can be seen in the graphic below, no more (or less) than one ‘unseeded’ side had ever qualified for the finals from the playoffs prior to the 2018 qualifiers. 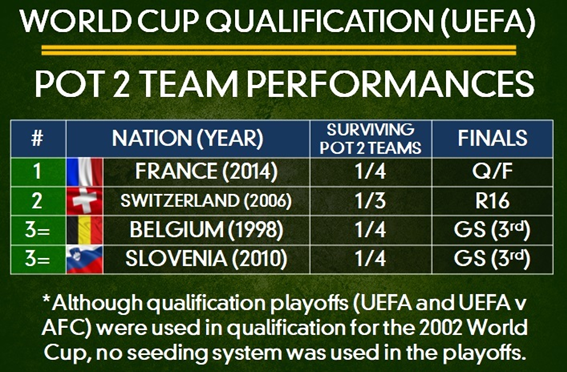 Even for those teams that survive the playoffs, regardless of the pot from which they are drawn, there is the additional knowledge that they are considered second best, having finished as runners-up in their respective qualification groups.

So, just how have ‘unseeded’ survivors of the UEFA qualification playoff fared in the finals?

Belgium was the very first nation to survive a UEFA World Cup qualification playoff under the modern format, after being drawn from pot 2.

Having fallen just a single point short of their qualification group winner, which was none other than the Netherlands, Georges Leekens’ men drew Rep. Ireland.

Belgium progressed to the finals 3-2 on aggregate, narrowly seeing off an Ireland side that had emerged as a surprise package at the previous World Cup, in 1994.

Subsequently, the Red Devils went undefeated in a group stage that saw them reunited with their hated Dutch neighbours.

Sadly, it was by virtue of three draws that they went unbeaten, and it was nowhere near enough to secure a passage through to the next stage.

The Switzerland national team has once more been involved in UEFA qualification playoff action, and on the page detailing free World Cup tips from Oddschecker, the Swiss have always been backed to deliver under pressure.

The growth of Switzerland, from an also-ran to a respected team, is a process that began twelve years ago.

In November 2005, they prevailed in a tie with Turkey (who finished third at the 2002 World Cup) after being drawn from pot 2.

After holding eventual runners-up France to a 0-0 draw, Switzerland dispatched Togo and South Korea 2-0 in both of their remaining group games.

As a result of finishing as group winners, Switzerland faced Group H runners-up Ukraine but bowed out on penalties.

On 12 November 2005, Switzerland (as a pot 2 team) scored the 2-0 win that would ultimately secure qualification and begin a process that would eventually establish the nation as a top seed in future European qualification tournaments for World Cups and Euro tournaments.

Yet again, only one team drawn from pot 2 prevailed in the playoff qualifiers. The lucky team on this occasion was Slovenia, having ousted Russia on away goals to reach the first ever World Cup tournament to be held in Africa.

Drawn into Group C alongside England, Algeria and the United States, Slovenia were eliminated by England in what proved to be a simple shootout for progress to the knockout stage.

So often a byword for flair and a winning mentality, the French national team hit a relative nadir in the first half of the 2010s. It was a bleak period that opened with a disgraceful performance at the 2010 World Cup.

The team had barely improved by Euro 2012 and continued to underachieve in the qualifiers for the 2014 World Cup.

As a consequence of finishing as runners up, a beleaguered French squad not only found itself in the qualification playoffs but also in pot 2 – by the sickening virtue of being a single FIFA rank below Ukraine, and it was that exact opponent ‘Les Bleus’ would draw.

Finishing top of the group in the finals, France’s run to the quarter-finals makes them the best performing European side to survive a qualification playoff after being drawn from pot 2 – for now.

Though history clearly goes against sides drawn from pot 2 in the UEFA qualifiers, records are there to be broken. For the 2018 World Cup playoffs, the pot 2 sides were Sweden, Greece, Rep. Ireland and Northern Ireland.

Though none of them are likely to ever win the World Cup, all of them have shown resilience in the face of better opposition – albeit to differing degrees of effectiveness.

This can only serve to inspire future generations to buck the existing trend against pot 2 teams and make the World Cup tournaments of the next generation just a few shades less predictable.