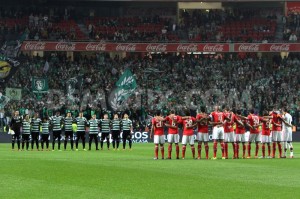 New signing Julio Cesar will surely be handed his first start in the Benfica goal for their next game after a humiliating mistake from Artur handed Sporting CP an equaliser in a game that finished 1-1.

The first Lisbon derby of the season was fiery and exhilarating encounter at a full capacity Estadio da Luz and both sides had opportunities to win the game. Though, Benfica manager Jorge Jesus will perhaps feel slightly aggrieved that his side were unable to fully take advantage of their early dominance.

Benfica started the strongest of the two testing Sporting goalkeeper Rui Patricio often in the early stages. The breakthrough came on 12 minutes as a result of Eduardo Salvio and Maxi Pereira combining well down the right flank. Pereira then flicked the ball to the feet of Nicolas Gaitan whose right footed shot flew past Rui Patricio much to the delight of the Benfica faithful.

Sporting were struggling to get into the game but were given a massive help by the farcical comedy goalkeeping of Artur on 20 minutes. Benfica left back Eliseu passed the ball back for Artur to clear but he was put under massive pressure from Andre Carrillo. Artur took an unnecessary second touch and his attempt to clear only managed to hit the Peruvian. The ball then bounced kindly for Algerian striker Islam Slimani to head home from just a yard away.

This gave Marco Silva’s men the confidence to take the game to the reigning champions and their high pressing did not sit well with Benfica’s backline. Slimani, in particular was a constant cause for concern and could have won the game for the ‘Lions’ two minutes from time. The 26-year-old got on the end of Nani’s cross finding space before shooting which Artur saved.

The draw for the Champions’ League Group Stages has created some interesting clashes for both Lisbon clubs. Europa League champions Benfica find themselves in a tough group with every team in with a realistic chance of qualifying for the Second Round. They will have to face Zenit Saint Petersburg, Bayer Leverkusen and Monaco while Sporting CP will fancy their chances in qualifying for the Second Round as they were drawn with Chelsea, Schalke 04 and Maribor.

Sporting CP will next face a home fixture to Belenenses while Benfica will travel to Vitoria Setubal.

Rio Ave thrashed Boavista 4-0 at home on Monday to put them top of the table for the international break and they do look like the team to watch out this season.

While this game was Boavista’s third straight defeat, it was also notable for being the third straight game where the 2000/2001 champions have had a man sent off. This time it was the turn of 23-year-old Brazilian defender Lucas who received his marching order for a second bookable offence on 59 minutes. After three games, the ‘Panthers’ find themselves bottom of the Primeira Liga and are yet to score a goal.

Last Thursday, Rio Ave qualified for the Europa League Group Stages thanks to Ahmed Hassan Koka’s last gasp winner at home to Swedish side Elfsborg. For their hard work, they have been drawn in a relatively tough group facing trips to Ukraine to play Dynamo Kyiv, Romania to face Steaua Bucuresti and Denmark to take on Aalborg.

Rio Ave travel to Moreirense in the next round of games on September 14 while Boavista will host Academica.

Braga continued their undefeated streak by beating Estoril 2-1 at home on Saturday. 26-year-old left winger Pedro Santos grabbed Braga’s first midway through the first half. Estoril got their equaliser from 28-year-old left back Emidio Rafael just after the restart.

Portuguese international Eder scored Braga’s winner on 56 minutes leaving the ‘Archbishops’ in fourth place before the international break. Braga take on Arouca in their next game on September 14.

Porto wait over an hour to put three past Moreirense

During the week Porto overcame French side Lille 3-0 on aggregate to enter the Champions’ League Group Stages for a record 19th time. Subsequently, the ‘Dragons’ were drawn in a group containing Shaktar Donetsk, Athletic Club and BATE Borisov. A somewhat straightforward group that Porto will expect to be top of come December.

Julen Lopetegui’s men maintained their 100% start to the season by defeating Moreirense 3-0 at the Estadio do Dragao on Sunday. Though, it was not as easy a game as the score line might suggest. Despite their dominance for large parts of the game, the ‘Dragons’ struggled to finish off any of their chances in the first half. Credit for this must be given to the Moreirense defence and in particular their goalkeeper Marafona.

It must have been a frustrating sight for Lopetegui. Seeing his side dictate the game but for the score line to still read 0-0 after 60 minutes. He didn’t have to wait much longer for the break through however.

Ricardo Quaresma found himself with the ball down the right with only Moreirense left back Andre Marques in front of him. Quaresma passed to Yacine Brahimi who was waiting just inside the box. The Algerian found enough space to get away from his man and send the ball across the ball for the Spaniard Oliver Torres to put away from six yards on 70 minutes.

The second goal came about in rather bizarre circumstances. Brahimi was running down the left with the ball at his feet. He sent a ball over the top for Oliver Torres to get onto but it was deflected. At this point, Marafona decided to come off his line and collect it but he miss-judged it, instead pushing it to Jose Angel. The left back then sent the ball into the box for Jackson Martinez to tower above the other defenders and head into an empty net. 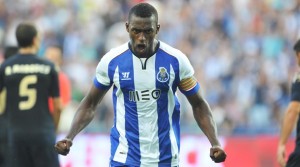 Unfortunately for Porto, when Marafona came out he clashed with Oliver Torres, dislocating the 19 year old’s shoulder. His replacement Juan Quintero was involved in proceedings immediately. Marcelo Oliveira brought down Jackson Martinez and Quintero took the resulting penalty which was saved by Marafona.

The 21-year-old Colombian quickly redeemed himself however, as he was instrumental in Porto’s third goal. Quintero picked the ball up on the right hand side showing some guile to get past a few Moreirense players. As made his way into the box he passed to Adrian Lopez, who nudged the ball into the path of Jackson Martinez to strike it first time from just outside the box, earning him his brace.

In their first three games, Porto have looked dangerous going forward and it must be noted that they are yet to concede a goal in a competitive match this season. Indeed, at this stage they look good value to be good value to end the season as league champions. Porto’s next game will be away to Vitoria Guimaraes on September 14.

Sky Sports News’ frenzied coverage of transfer deadline day in the top tier of English football was imbued the sense that anything could happen in what proved to be rather thrilling television. The situation in Portugal was an altogether more reserved affair.

This, of course, is nothing new. While the business of Portugal’s top clubs may lack the glamour of transfers on the rest of the continent, they consistently do good business. Buying players with potential relatively cheap, giving them to opportunity to shine on Europe’s biggest stage before making a very healthy profit. So, while the names of players like Otavio may seem unfamiliar now, if history is anything to go by you certainly will be hearing it again.

The day’s biggest move of the day was that of 19-year-old Bryan Cristante joining champions Benfica from AC Milan for a fee of around €6 million. The centre midfielder is a highly regarded young player having come through the prestigious youth academy of the Rossoneri. Writing back in January, British – Italian sports journalist Paolo Bandini described Cristante as having “has a confidence that borders on excessive, a willingness to attempt the ambitious pass or shot any time he is in possession—even if sometimes he shouldn’t. His critics might call it arrogance, but that seems unfair on a player who also has the work ethic to match. Coaches depict him a consummate professional, one who shows up to work early every day and stays out after training to get a little extra work in.” 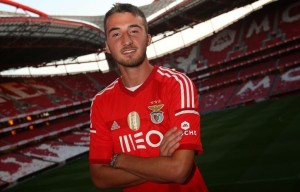 Indeed, it appears as though the Canadian born Italian is well on his way to becoming a top class modern midfielder so it’s strange that Milan would let him leave the club for little. Though, Cristante has only made three Serie A appearances, he made a significant contribution in all three.

Porto meanwhile, made two signings, that of former Crystal Palace midfielder Jose Campana on loan from Sampdoria and intriguingly, that of Otavio from Brazilian side Internacional for around €7 million and reportedly has a €50 million release clause. The 19-year-old has been dubbed ‘The New Deco’ due to their similar heights, builds and playing styles. 21-year-old Campana, on the other hand, is looking to rejuvenate his career under former manager Julen Lopetegui. Campana was captain of Spain’s 2012 UEFA European Under-19 Championship winning side.

Arguably, the biggest transfer story of the day did not involve an actual transfer. It was the news that William Carvalho would be staying with Sporting CP for the foreseeable future at least. All summer long, there have been rumours of very strong interest in the 22-year-old centre midfielder from the likes of Arsenal and Manchester United. Carvalho himself dismissed that he was leaving on deadline day, telling Portuguese sports news paper A Bola that ” I am under contract with Sporting and I’m a Sporting player. There is no way I can say I am going to leave. I am fine at Sporting.”

Although if reports are to believed, both clubs made player – plus – cash bids for the Portuguese enforcer. Arsenal offering Costa Rican international Joel Campbell and Manchester United proposing Anderson.