Midtjylland’s fantastic start to the season continues to roll on 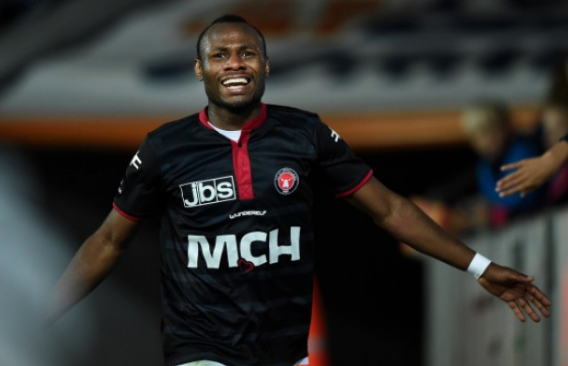 Last season’s Superliga campaign ended in disappointing fashion for Midtjylland, as a string of poor results late on in the year proved to be enough to deny them their first ever league title, forcing them to finish in third place, whilst also arguably handing the crown to Aalborg after leading the way for the vast majority of the season.

This season, however, they have come back fighting, and with just over a fifth of the campaign already completed, they lead the way with 18 points, four more than nearest challengers Hobro, who were held to a 1-1 draw by SønderjyskE on Monday evening, and a huge eight more than the reigning champions, who currently lie in fifth place after a poor start to the season. Midtjylland’s 2-0 loss away to Aalborg in Round 2 remains their only defeat so far, and this weekend saw them win their sixth game of the season to extend their winning streak five games.

They were made to work hard for the three points, however, as Odense, who, as a result of this week’s defeat, find themselves in the relegation zone with just five points from seven games, almost came away from MCH Arena with a hard-earned point, as both Kasper Larsen and Vladimir Dvalishvili scored in the second half to cancel out goals from Midtjylland’s Sylvester Igboun, before the Nigerian striker was able to wrap up his hat-trick – and steal a victory for the hosts – from the penalty spot with one of the last kicks of the game after Costa Rica international Marcos Ureña, who was making his first appearance for the club since his move from Russian side Kuban Krasnodar, was brought down just inside the box by Mohammed Diarra, who had only been on the pitch for four minutes after coming on to replace Emil Larsen in the dying moments of the game.

Midtjylland now face a tough clash against fifth-place Nordsjælland next week, but, with so many of the league’s other sides in erratic form at the moment, a win there would surely cement themselves as favourites to lift the Superliga title come next June, even at this early stage of the season.

Struggling Esbjerg finally pick up their first win of the campaign

At the other end of the table, Esbjerg have had a poor start to the season, with none of their opening six games of the campaign ending in victory, and three of those ending in defeat. Before this week, last season’s fifth-place finishers, who only managed to finish that high, and, as a result, qualify for the Europa League qualification stage, after a run of good form in the latter half of the season helped them to avoid a last-minute battle to avoid relegation, had found goals hard to come by, as they were only able to score four goals in six games, with half of those coming in their 3-2 defeat away to Nordsjælland last month.

However, they almost doubled their scoring tally and picked up a vital three points this weekend when they comfortably won 3-0 at home to Vestsjælland, thanks to a first-half brace from Robin Söder and a fourth goal of the season for Martin Pušić, who, before Söder scored his first two goals of the season this week, had proved just how important he is to this struggling Esbjerg side by scoring all but one of their goals this campaign. Söder’s acquisition from Swedish side IFK Göteborg almost a month ago was a direct result of their lack of threat in the final third, and with two goals in two appearances, Esbjerg will be hoping that the young striker can help to push them further up the table and towards a third consecutive top-half finish.

This weekend’s victory means that they finish the week outside of the relegation zone in 10th place, one point in front of Odense and one point behind both eighth-place SønderjyskE and ninth-place Vestsjælland, but next week’s clash against Hobro is guaranteed to be a difficult one, as is their tough game at home to sixth-place Brøndby in two weeks’ time.

Henrik Larsson’s Falkenberg have had a tough two months, and their recent poor form, which has seen them lose six of their last eight league games, picking up six points in the process, has forced them further and further down the table, and they now find themselves firmly part of the fierce fight to avoid relegation to Superettan. Their struggles were worsened this weekend not only by a third consecutive defeat – they were beaten 3-1 by fellow strugglers Gefle, with Stefan Rodevåg’s 38th-minute opener being cancelled out by a second-half Johan Bertilsson brace and a second goal of the season for Anders Bååth-Sjöblom – but also by vital victories for three of the bottom five sides, with Norrköping and Mjällby, who sit in 13th and 15th place, respectively, also picking up three important points each in their respective clashes this week.

Norrköping’s win was arguably the most important of them all, as they brought an end to a torrid seven-game winless run by beating bottom side Brommapojkarna 3-1, thanks to goals from Alhaji Kamara, Emir Kujović and Arnór Ingvi Traustason, whilst Mjällby came from behind to beat 11th-place Halmstad 2-1 away from home on Sunday afternoon. Norrköping’s win, only their sixth of the season, means that they finish the week outside of the relegation play-off spot, one point clear of Falkenberg, who take their place in 14th, and still two points clear of Mjällby.

With seven games left to play, Falkenberg are in serious danger of dropping into the relegation zone if they are not able to turn things around quickly, but it will be no easy task, as three of their final seven clashes come against teams that currently sit in the top half of the table, whilst they also face tough games against in-form Örebro, who beat sixth-place Kalmar 2-0 this weekend to pick up their fourth consecutive win, and Helsingborg before a battle against Mjällby on the last day of the season that could decide who remains in the top flight and who is condemned to Superettan.

League leaders Malmö FF, who have been clear favourites for much of the season to once again lift the Allsvenskan title come November 2nd, have been in erratic form recently, and, as a result, have seen their lead slowly diminish in recent weeks. Just one win in their last four games means that their advantage over second-place AIK is just five points, but it could have been even worse for the reigning champions if their main rivals for the league crown were able to take advantage of this weekend’s action-packed 3-3 draw away to fifth-place Häcken by beating Helsingborg in their clash at Nye Olympia Stadion on Monday evening.

Instead, the 10th-place side comfortably won 3-1, with all three of their goals, which were scored by Christoffer Andersson and David Accam, the latter of whom bagged his second brace in his last three league games, coming in the first 45 minutes. As a result, the defeat leaves AIK just two points clear of Elfsborg, who extended their unbeaten run to four games by holding IFK Göteborg, who sit a further four points behind in fourth place, to a goalless draw at home on Sunday.

AIK will now be hoping that Helsingborg can do them a favour by beating Malmö FF in next weekend’s clash between the two sides at Swedbank Stadion, whilst they will need to return to winning ways against a determined Halmstad side who before this weekend went three games without losing to climb up the table and away from the dreaded relegation zone.

Malmö FF arguably have the most comfortable finish to the season of the two sides, but any further slip-ups could leave them in serious danger of surrendering their lead at the last moment, meaning that October 5th’s clash between the two in Solna could prove to be far more important than many expected it would be just a few weeks ago.

At long last, a big win for Brann moves them out of the relegation zone

After picking up important wins against Aalesund and Rosenborg recently – not to mention their fantastic 3-3 draw away to Vålerenga three weeks ago thanks to two goals in the last 10 minutes – Brann have been edging ever closer to finally exiting the relegation zone after a torrid season in which they have spent the vast majority of the campaign battling to avoid relegation to the second tier for the first time in almost 30 years.

This week, they were finally able to climb out of the bottom two and into a safe position, as a third win in their last five games means that they now sit in 13th place, one point clear of both Haugesund and Sogndal, who sit in 14th and 15th, respectively. This weekend’s victory was arguably Brann’s best of the season, as they comfortably beat reigning champions Strømsgodset 4-1 away from home thanks to goals from Marcus Pedersen, Kasper Skaanes, Amin Askar and Erik Huseklepp.

Out of the bottom four sides, Brann are now the favourites to avoid relegation, as Haugesund, Sogndal and bottom side Sandnes Ulf, whom Brann face next weekend, are all in poor form at the moment. Sandnes Ulf have only won twice this year, with their last victory coming back at the start of June, whilst Sogndal’s 1-1 draw against Aalesund this week was their first point in a month-and-a-half.

As for Haugesund, the good run of form that helped send them up the table and away from the relegation zone is but a distant memory, as they have now lost their last four league games in a row after Sunday’s 4-1 defeat against Vålerenga, in which Viðar Örn Kjartansson scored a hat-trick to increase his goal tally for the season to an incredible 24 goals.

With just seven games left to play, a win against out-of-form Sandnes Ulf next week is vital, as their last two games of the season come against Sogndal and Haugesund, and they could end up determining whether or not Brann’s 27-year stay in Tippeligaen will come to a dramatic and disappointing end.