A fantastic week ends in a disappointing defeat for Malmö FF 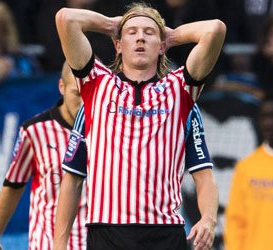 It has been a week of contrasting emotions for Malmö FF and their Norwegian manager Åge Hareide, as they were subjected to both unbridled joy and pure frustration in the space of just five days.

Their elation came as a result of their fantastic 3-0 win at home to Red Bull Salzburg – a side that many tipped as favourites to progress to the group stage, particularly after their first leg victory in Austria – in the Champions League on Wednesday evening, with Markus Rosenberg, arguably the Swedish side’s most important player since his return to the club in February, netting himself a brace and Magnus Eriksson scoring his first ever Champions League goal in a wonderful performance from the reigning Allsvenskan champions in front of 20,000 fans at Swedbank Stadion.

The victory, and their subsequent qualification for the next round of the competition, means that they will be the first Swedish representative in the group stage of the Champions League since Helsingborg in the 2001-02 season, certainly a fine feat for a club from a country that has continually struggled in Europe in recent years.

However, back in domestic action on the weekend, things did not quite go to plan for Malmö FF. In a week of several surprising results, the biggest shock was arguably the leaders’ first league defeat in almost four months, which they suffered at the hands of seventh-place Djurgården on Sunday afternoon.

In the wake of their midweek success, spirits were understandably high, and although Djurgården have been in good form recently, picking up two wins and a draw in their last three games before this weekend, many were expecting Malmö FF to extend their unbeaten run to an incredible 14 league games. However, a clearly tired Malmö FF side failed to hit the back of the net for only the second time this season, allowing Djurgården to come away with three important points, thanks to first-half goals scored by Haris Radetinac and Sebastian Andersson, the latter of whom has now scored four goals in his last two games.

Whilst the defeat is by no means the end of the world for Malmö FF, it does leave them just four points in front of second-place AIK, who, after suffering a shock defeat to Örebro two weeks ago, have re-found their form in their last two league games. Malmö FF now face potentially tricky back-to-back games against Häcken and Helsingborg after the international break, and they need just one last push to send them over the finish line and bring a fantastic season to a victorious end.

Örebro and Halmstad are both in fantastic form at the moment, with the former winning four of their last five league games, whilst the latter are unbeaten in their last three. As a result, they have both rocketed up the table and now lie in eighth and ninth place, respectively, almost 10 points clear of the relegation that at one point looked as if it was going to swallow them up and never let go. Halmstad’s win this week was particularly impressive, as they comfortably beat Helsingborg 4-1 away from home.

Despite a disappointing season that has seen the seven-time league champions, who won the Double as recently as 2011, languishing in the bottom half of the table, they had embarked on a splendid eight-game unbeaten run before this weekend, which makes Halmstad’s comfortable victory even more impressive. As for Örebro, they recorded a routine 3-1 victory at home to bottom side Brommapojkarna, with Brazilian midfielder Daniel Sobralense, recently signed on loan from IFK Göteborg, picking up a double and Daniel Gustavsson scoring his second goal in his last three appearances.

With only one of the six sides below them able to pick up a point in their respective games this weekend (that club was 15th-place Mjällby, who held Häcken to a 1-1 draw on Saturday) and four of those without a victory in their last three league games, Örebro and Halmstad’s chances of survival are looking very good, although they both face tough clashes against Kalmar and Mjällby next week that could potentially send them crashing back down to earth with less than a quarter of the season remaining.

Newly-promoted Hobro continue to go from strength to strength

Few expected last season’s Danish 1st Division runners-up Hobro to take to life in the Superliga so comfortably, and many saw their early season success as merely a fluke or a run of good luck that would come to a sudden stop when they were forced to take on the league’s top sides, but Round 4’s fantastic 3-0 win against league giants København put an end to the naysayers’ pessimism, and since then the North Jutland club have continued to go from strength to strength, growing in confidence as each week passes.

Last round, they denied Nordsjælland the opportunity to win three games on the bounce by holding them to a goalless draw at DS Arena, whilst this week they returned to winning ways by beating Vestsjælland 3-1, thanks to goals from Quincy Antipas, Mads Hvilsom and Martin Thomsen. It was fitting that the trio ended up scoring the all-important goals, as each one has proved to be an extremely important part of a very impressive, hard-working side; Antipas in particular has brought spellbinding creativity and fluidity with him from former club Brøndby, whilst Hvilsom has already found the back of the net five times this season, more than any other Superliga player.

This weekend’s victory means that Hobro finish the week in second place, just two points behind Midtjylland – who have won all of their last four league games – and two points ahead of Brøndby, Nordsjælland and Randers, all of whom have been in erratic form so far this season. Hobro now go on to face struggling sides SønderjyskE, Esbjerg and Silkeborg, who all occupy three of the bottom four spots in the table after poor starts to the campaign, back-to-back after the international break, and, with an incredible amount of momentum behind them after such a fantastic season so far, it would not be surprising if they are still fighting near the top of the table come their important clash against Midtjylland in a month’s time.

Much-needed wins for Aalesund and Start this weekend meant that both sides were able to move slightly further away from danger as we enter the final quarter of what has been a truly thrilling Tippeligaen season. Both teams have suffered throughout this campaign, and before this week they sat just two and three points clear of the dreaded drop zone, respectively, but impressive wins have helped to send them up to 11th and 12th place in the table.

Aalesund’s victory was arguably the best of the two, as they beat an out-of-form Strømsgodset side, who drop to fifth place as a result of the defeat, 2-0 at home on Saturday, with both of their goals being scored by Finnish midfielder Sakari Mattila from the penalty spot, whilst Start showed great grit and determination to win 3-2 against struggling Sogndal, with their winning goal also coming from the penalty spot with just six minutes left to play.

Both sides were also boosted by defeats for three of the four sides below them, with only Sandnes Ulf, who remain bottom of the table, five points behind nearest side Brann, able to pick up a point in what was their fourth consecutive draw. Brann narrowly lost 1-0 to league leaders Molde, keeping them in the relegation zone for another week, albeit just one point behind Sogndal, whilst Haugesund, who sit a point ahead of Sogndal in 13th place, lost 2-0 against fourth-place Lillestrøm. Both Haugesund and Sogndal are really struggling at the moment, with the former managing to pick up just one point in their last four league games, whilst the latter, who currently occupy the relegation play-off spot, have only won once in the last three months.

Vålerenga’s inability to kill off games is well documented, and it is arguably the sole reason why they continue to struggle and drop further away from a top-three finish. At the other end of the pitch, they are thriving; only Molde have scored more goals than the Oslo club this season and Viðar Örn Kjartansson, the in-form Icelandic striker, has scored 21 goals in 21 appearances, with eight of those coming in his last six league games. However, their sloppy defence continues to let them down, and, as a result, their hopes of finishing in the top three and, subsequently, qualifying for the Europa League are arguably all but over.

Last weekend saw them concede two late goals against Brann in a game that ended in a frustrating 3-3 draw, and this week they had an even more torrid time, as, after taking the lead in the seventh minute through Simon Andreas Larsen, they ended up losing one-goal leads twice in the first half of their clash away to Bodø/Glimt, which ended in a 4-3 victory for the eighth-place side.

The game was the third time in their last five games that Vålerenga had conceded three or more goals, and the defeat leaves them without a win in over a month and six points behind third-place Rosenborg. Vålerenga manager Kjetil Rekdal has been exasperated by what he has seen over the past few weeks, and he blasted his team after the game, claiming that the sole reason that they lost was due to their “horrible defensive performance”.

With Rosenborg and Lillestrøm in impressive form at the moment (the latter side have been particularly impressive recently, winning four of their last five league games to give themselves a real chance of picking up a medal this season) it is difficult to see Vålerenga finishing any higher than fifth this campaign. Big changes must be made to help repair such a weak back line, and quickly.