This season’s fight to avoid relegation from Allsvenskan has been one of the most thrilling and action-packed in recent years. Heading into the final game of the season, three teams were still desperately battling to avoid finishing in the first of the two automatic relegation spots come two o’clock on Saturday afternoon. 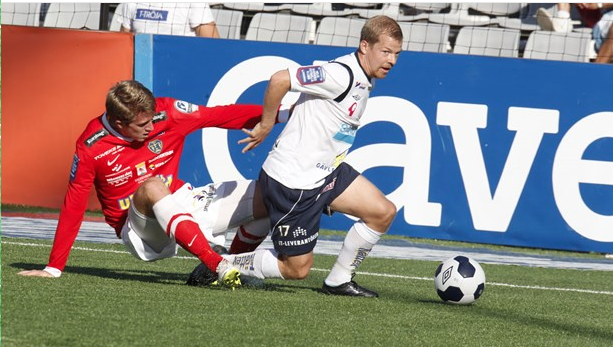 Norrköping, whose late-season exploits, including this weekend’s 1-1 draw against Djurgården, have surely earned them the distinction of being one of the most impressive and commendable sides this year, only just confirmed their safety in the penultimate round with a fantastic win against high-flying Örebro – who bounced back this weekend with an emphatic 5-2 victory at home to fifth-place Häcken to end an impressive season on a high.

As a result, Falkenberg, Gefle and Mjällby all went into their final day clashes well aware that they could end up as the side that will join Brommapojkarna in the second tier next season.

The most intriguing battle was between Gefle and Falkenberg, two sides that were seperated by only three points heading into this weekend. Falkenberg, who have enjoyed a good run of form recently, were the team that occupied the sought-after 13th place spot before the final game of the year, and all they needed to do was pick up a point against 15th-place Mjällby and not only would they confirm their place in next season’s Allsvenskan, but they would also condemn Mjällby to Superettan. And that is exactly what happened, as the two sides drew 1-1 at Falkenbergs IP, despite the visitors’ best efforts, meaning that Mjällby return to the second tier after five seasons in the top flight.

As a result, Falkenberg’s draw confirmed their spot in Allsvenskan for another season, bringing an end to a year in which Henrik Larsson’s men proved that they can battle against the big boys, despite the fact that they were playing in the top tier for the first time in their 86-year history.

Their draw also means that Gefle have finished the season in the relegation play-off spot in 14th place, despite the fact that they were able to come from a goal down to pull off a fantastic 2-1 win at home to ninth-place Helsingborg, thanks to a brace from Johan Oremo, the club’s top goalscorer this season. Gefle will now have to battle for a place in Allsvenskan in a two-tie clash against Ljungskile, the side that finished in third place in Superettan.

Ljungskile impressed this season, losing only twice all year, and finished just one point behind both Hammarby and GIF Sundsvall, the two sides that will take the place of Mjällby and Brommapojkarna when Allsvenskan resumes next March.

There was also a final day battle occurring at the top of the table, one that would determine which side would finish in the second of the two Europa League spots. Heading into the last game of the season, the battle was firmly between AIK and Elfsborg, two sides that have struggled in recent weeks.

AIK arguably endured one of the poorest runs of the year throughout September, failing to win in five consecutive league games, their worst run in four-and-a-half years, which not only cost them a second-place finish, which IFK Göteborg confirmed this weekend with a 5-1 thrashing of Halmstad, but also the chance to challenge Malmö FF for the title which was brought to an end this week with a 2-1 defeat against eighth-place Åtvidaberg, the gap between the league champions and IFK Göteborg ended up being only six points, far fewer than many had predicted that it would be.

Elfsborg had also struggled in recent weeks, winning just two of their previous seven games heading into this weekend, with their 5-1 defeat away to Örebro at the start of October being a particularly low point, but arguably had an easier end to the season than AIK, as they faced a trip to already-relegated bottom side Brommapojkarna, whilst AIK had to play a Kalmar side that finally returned to winning ways last week after embarking on a torrid seven-game winless run.

With just two points separating the two sides before Saturday’s final games – AIK started the weekend in third place with 51 points, whilst Elfsborg sat just behind them with 49 – all Elfsborg had to do was beat Brommapojkarna and hope that AIK slipped up against Kalmar.

Elfsborg did their job in comfortable enough fashion, winning 1-0 in front of just 813 people at Grimsta IP thanks to a 52nd-minute Arber Zeneli goal, but they were let down by Kalmar, who, despite their best efforts, were held to a 1-1 draw by AIK, confirming the latter side’s place in the Europa League.

It has been a torrid season for Brann, to say the least. After struggling near the bottom half of the table for the majority of the year, the Bergen side were slipping ever close to relegation to the second tier of Norwegian football for the first time since 1986 heading into this weekend’s penultimate game of the season, after a poor run in which they were only able to pick up one victory in eight games, with their last four league clashes all ending in defeat.

As things stood before the start of Round 29, a defeat against fellow strugglers Sogndal, who started the week just one point ahead of Brann in the relegation play-off spot in 14th place, at Brann Stadion on Sunday would confirm their place in the 1st Division for next year, whilst a draw or a win would move them into the play-off spot ahead of their final game of the season against Haugesund in a week’s time. 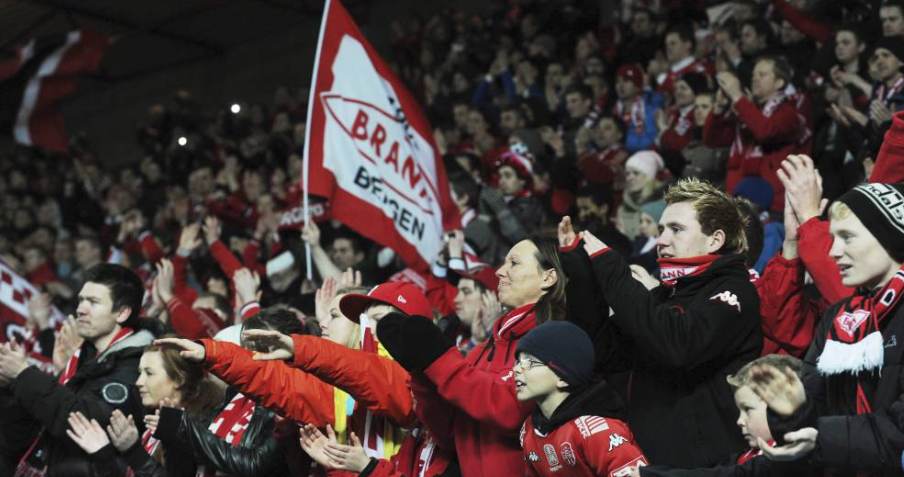 At the end of a nervy first half that looked as if it was going to end goalless, thanks largely to great goalkeeping from both Piotr Leciejewski and Kenneth Udjus, Jonas Grønner fired the hosts into the lead with one of the last kicks of the first period, a great volley that the 20-year-old defender fired into the ground and past Udjus from the edge of the six-yard box.

Brann then started the second half in equally impressive, not to mention determined, fashion, immediately breaking down the right wing before a wonderful cross from Birkir Már Sævarsson met former Sogndal striker Azar Karadas, who had no difficulty doubling his side’s lead with a superb side-footed half-volley that left the exasperated goalkeeper with no chance.

Sogndal fought back valiantly and reduced the deficit to just one goal through Ulrik Flo nine minutes later, but, despite their best efforts, they were unable to find the back of the net again, as Brann held on to record only their second league victory in the last two-and-a-half months.

Sandnes Ulf slip up at Start, condemning them to the second tier

Brann’s victory also had dire consequences further down the table, as it means that Sandnes Ulf will be playing in the second tier next season after they were involved in a thrilling game away to Start that ended in disaster.

A fantastic first half against a Start side that have been struggling in recent weeks (they came into Sunday’s clash at Sør Arena on the back of two consecutive defeats against Aalesund and Lillestrøm) saw the bottom side head into the half-time break with a 2-1 lead, thanks to goals from Edier Frejd and Fredrik Midtsjø, the latter of which came after a fantastic dart through the middle of the Start defence from the young midfielder.

Even though Guðmundur Kristjánsson pulled a goal back for the hosts in added time at the end of the first period, it would not last long, as poor marking allowed Randall Brenes to reestablish Sandnes Ulf’s two-goal lead with a thumping strike from inside the penalty area just two minutes after the restart.

Heading into the final few minutes of the game, it looked as Sandnes Ulf had earned themselves the right to live to fight another day, as a win would move them equal on points with Sogndal, giving them a chance, albeit a slim one, of pulling off what would be a truly incredible last minute escape from the relegation zone on the final day of the season. However, it was not to be, as a collapse of epic proportions from a defence that have struggled all season meant that Start were able to salvage a point late on, thanks to two goals in as many minutes from Bismark Acosta and Lars Jørgen-Salvesen.

The first was bundled into the back of the net by the Costa Rican defender in the 93rd minute after the Sandnes Ulf defence failed to clear an Espen Hoff corner, whilst the second was an incredibly cruel way for the side to lose their top-tier status, as a misplaced Eiður Aron Sigurbjörnsson header fell perfectly at the feet of Salvesen, who sprinted through the middle of Derek Decamps and Frejd before firing the ball past the outstretched limbs of Hannes Þór Halldórsson, earning his side a, quite frankly, lucky point, and condemning Sandnes Ulf to the 1st Division after three seasons in Tippeligaen.

Things keep going from bad to worse for Nordsjælland, a side that looked so promising in the opening weeks of the season but have struggled terribly over the past month. Their last league win – a fairly straight forward 2-1 victory against struggling Odense – came at the end of September, and since then the 2011-12 Danish Superliga champions have managed to pick up just one point, with that coming in a goalless draw away to a Randers side that have also been finding points hard to come by in recent weeks. 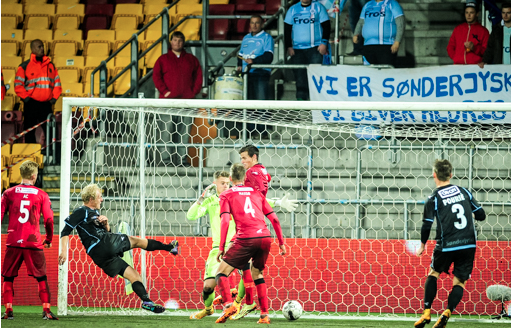 Their 3-2 defeat at home to SønderjyskE two weeks ago kicked off a torrid run of form that Ólafur Kristjánsson’s men are finding impossible to bring to an end, and this week their chances of catching up with in-form Midtjylland got even worse, as the league leaders comfortably beat them 2-0 at MCH Arena thanks to a second-half brace from 19-year-old Pione Sisto, who has now scored as many goals in his last four games as he managed all of last season.

Midtjylland were helped by Croatian midfielder Mario Tičinović, who earned himself a straight red card just 10 minutes into the second half when he brought down Petter Andersson in front of goal with a clumsy tug of the shirt. Sisto curled the resulting set-piece past David Jensen and into the back of the net, and from then onwards it was plain sailing for Midtjylland, who continue to go from strength to strength as the season progresses.

The victory means that they now sit 11 points clear of Nordsjælland and nine in front of their nearest challengers København, who were held to a 1-1 draw at home to ninth-place SønderjyskE on Sunday after the visitors cancelled out Nicolai Jørgensen’s 41st minute opening goal with one of their own, a wonderful low header, through veteran defender Niels Lodberg in the dying moments of the game.

As a result, København, who have successfully bounced back from their lacklustre start to the season by embarking on a six-game unbeaten run, now sit just one point ahead of local rivals Brøndby, who are in equally fine form at the moment. This weekend saw them win 1-0 at home to Randers thanks to a fifth league goal of the season from Teemu Pukki with just three minutes of the game left to play, and as a result they move above their opponents and into third place ahead of next weekend’s clash against a Hobro side that are finding life in the top tier extremely difficult to cope with.