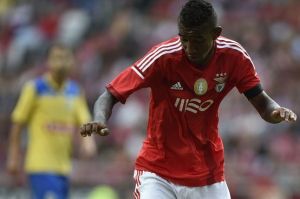 For the second game in a row, the Primeira Liga champions had to wait until the last 20 minutes to breakthrough a stubborn defence.

Benfica eventually ran out 4-0 winners over Arouca at the Estádio da Luz but for a long time it seemed to heading for a stalemate.

This game was an interesting one as it was the first time ‘Aguias’ fans got to see Lisandro López in action. The 25-year-old Argentinian centre back signed for Benfica from Argentinian side Arsenal de Sarandi in 2013 but was loaned out to La Liga side Getafe for all of last season. López was signed as a long term replacement for Ezequiel Garay who joined Zenit Saint Petersburg in the summer.

Arouca defended deeply in the first half forcing Benfica to shoot from distance. Arouca looked far more dangerous going forward and forced Artur into making a couple of decent saves.

In the second half Benfica turned the screw on the opposition and finally found a breakthrough on 75 minutes. Anderson Talisca played a nice one-two with Derley before storming into the box and finishing powerfully in the top right corner. This was Talisca’s sixth goal in seven games and the 20-year-old is now the Primeira Liga’s top goalscorer.

Benfica doubled their lead five minutes later. Eduardo Salvio ran into the box from the right and sent in a low cross for Derley to finish easily. Salvio, reportedly a target of AC Milan, made it 3-0 on 83 minutes. Ola John ran down the left wing into the box and beat his man. Before the ball went dead, the former Twente winger chipped the ball back across the goal. Salvio jumped up high and headed the ball into the net.

New signing the Brazilian striker Jonas scored on his debut to complete the rout. Ola John sent a cross in from the left which the former Valencia turned past the Arouca goalkeeper.

Once the international break has finished Benfica’s next game will be a trip to Braga on October 26.

Porto keep up the pressure on Benfica

Porto edged past Braga 2-1 in an exciting end-to-end affair at the Estádio do Dragão on Sunday evening. Both sides were intent on attacking and Braga looked to seize upon a Porto side that has arguably not yet settled, as Julen Lopetegui selected his 11th different starting line-up in 11 matches this season.

On 25 minutes the ‘Dragoes’ centre back Maicon flicked on Yacine Brahimi corner for Bruno Martins Indi to finish at the far post. Porto’s lead didn’t last long however, as on 32 minutes Braga equalised. Brahimi was caught in possession by Ruben Micael who passed to Ze Luis. The Cape Verdean striker lost Martins Indi and coolly finished past Fabiano. Indeed, Ze Luis’ form has kept Eder out the team.

At half time Lopetegui made the all important substitution by bringing on Juan Quintero for Ruben Neves. Quintero scored what proved to be the winner just on the hour. The Colombian received the ball from Brahimi jinked his way into the box before finishing well from 15 yards.

Porto’s next game will be away at Arouca on October 25.

Sporting CP turn on the style 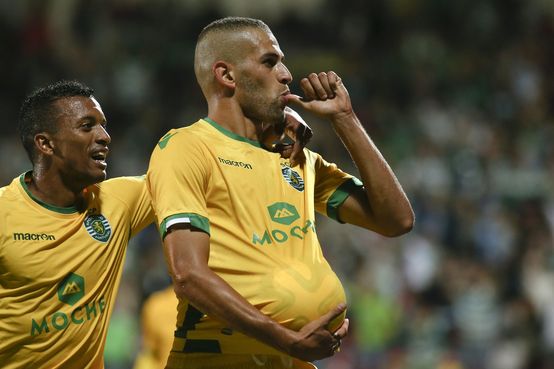 Sporting Clube de Portugal maintained their good form as they demolished Penafiel 4 – 0 on Saturday night. Sporting were frustrated in the first half struggling to get anything going.

In the second half Marco Silva made two changes that completely changed the game, replacing Andre Martins with Fredy Montero and Adrien with William Carvalho.

Sporting took the lead on 69 minutes thanks to Islam Slimani. The Algerian striker made a well timed run into the box to get onto Paulo Olivera’s cross heading past Penafiel’s Iranian goalkeeper Alireza Haghighi.

Slimani grabbed his brace just two minutes later. The 26-year-old got on the end of long floated ball from midfield. His right foot shot went in off the underside of the bar much to the delight of the travelling ‘Leoes’ support who chanted Slimani’s name.

Colombian striker Fredy Montero ended his long spell without a goal as he got on the end of Diego Capel’s low cross to make it 3-0. Sporting completed the rout through Nani. Montero threw the ball in on the right hand side to Nani who was waiting on the edge of the box, the former Manchester United man returned the ball to Montero but continued his run. When Nani got the ball back he sent a nice little chip over the oncoming Haghighi to score his second goal since his return.

Sporting CP take on Maritimo at home on October 26.

Last Friday Vitoria Guimaraes got back to winning ways as they defeated Boavista 3-0 at home. Uruguayan midfielder Jonathan Alvez took the lead for the ‘Branquinhos’ just on the stroke of half time.

After Boavista’s Brazilian defender Philipe Sampaio was shown a second yellow card on 53 minutes 25-year-old midfielder Andre Andre made it 2-0 from the penalty spot on 13 minutes later, before Alvez grabbed his second five minutes from time.

Vitoria Guimaraes travel to Vitoria Setubal for the first game after the international break on October 24 while Boavista host Pacos Ferreira on October 25.

Rio Ave’s run of poor form continued on Sunday as they drew 0-0 away at Nacional. Rio Ave host second from bottom Penafiel next.

Pacos Ferreira and Maritimo played out a five goal thriller on Sunday but Pacos ran out winners. Nigerien striker Moussa Maazou took the lead for Maritimo after 22 minutes.

A brace from forward Bruno Moreirain in the second half made it 2-1 before Brazilian forward Paraiba gave Pacos a two goal cushion.. Maazou got a goal back for the’Verde Rubros’ and though it appeared a comeback was near. Midfielder Fransergio was sent off for a second bookable offence on 70 minutes.

As mentioned Pacos Ferreira travel to Boavista on October 25 while Maritimo face a tough trip to Estadio Jose Avalade to take on Sporting CP.

Fernando Santos’ much anticipated first Portuguese squad is a interesting mix of recalled stars and much needed new blood. As expected, Santos recalled Ricardo Carvalho, Danny, Tiago and Ricardo Quaresma who were all frozen out under former coach Paulo Bento.

Cedric, Ivo Pinto, Adrien, Joao Mario and Southampton’s Jose Fonte have all been called up but could make their debuts for the Seleção.

Real Madrid’s left back Fabio Coentrao has pulled out with a knee injury and no replacement has been called up as of yet.

There is a reportedly upbeat atmosphere at the training camp ahead of the friendly match against France in Paris on Saturday before travelling to Copenhagen to take on Denmark in their Euro 2016 Qualifier next Tuesday.