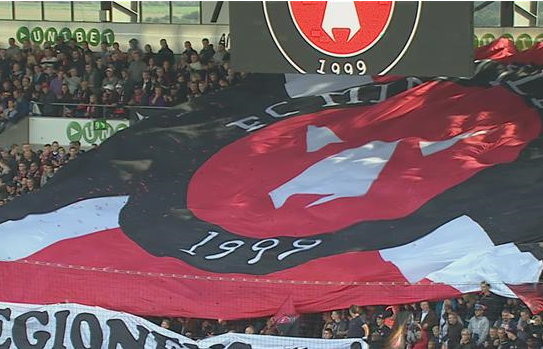 Midtjylland, who before this weekend had won their last five consecutive Danish Superliga games, were finally brought crashing back down to earth this week, as a 2-1 defeat away to a revitalised Nordsjælland side means that their lead at the top of the Danish Superliga table is now just two points.

Sunday’s game at Farum Park was always going to be difficult, as Nordsjælland have looked impressive under new manager Ólafur Kristjánsson so far this season, and, after a goalless first half, it was made even more so by talented youngster Uffe Bech and in-form midfielder Kasper Lorentzen, who both scored within seven minutes of one another to put the hosts 2-0 ahead with 25 minutes left to play.

Bech has been in inspired form so far this campaign, and Sunday’s goal was the 21-year-old’s sixth of the season, whilst Lorentzen, who missed all of last season due to injury, has now scored two goals in two games for Nordsjælland, helping to send them up to third place in the table.

Meanwhile, Randers’ great start to the season continues to march on, as they now sit just two points behind Midtjylland in second place thanks to Friday’s 1-0 victory at home to Silkeborg. The victory was an extremely narrow one, however, as they were saved from having to share a point with the bottom side by Viktor Lundberg, who came off the substitutes’ bench to score the all-important winning goal with just two minutes of the game left to play.

Esbjerg are beginning to find their feet, whilst Odense continue to struggle in the relegation zone

Esbjerg are slowly but surely finding their form after a poor start to the season, and this weekend saw them draw 1-1 against Hobro, who drop to fourth place as a result of Nordsjælland’s victory against Midtjylland. Martin Pušić was again on hand to fire Esbjerg into the lead after only 15 minutes with his fifth goal of the season, but Martin Thomsen, who is just behind the Austrian striker in the top goalscorers table with four goals in eight appearances, was able to equalise for last season’s Danish 1st Division runners-up just four minutes into the second half.

Esbjerg have now only lost once in their last five league games but it is victories that they are finding hard to come by, as last weekend’s 3-0 win at home to Vestsjælland remains their only one of the season. They now face back-to-back clashes against the two main clubs from the capital, København and Brøndby, before a must-win game against Odense in just under a month’s time. The latter side, who sit just behind them in 11th place, drew 1-1 at home to SønderjyskE on Sunday to avoid losing for the third game in a row, and the point means that they remain just one behind Esbjerg ahead of two clashes that are set to be as difficult as Esbjerg’s, as they travel to Nordsjælland next week before entertaining an equally strong Randers side in two weeks’ time.

In this weekend’s tough clash, Odense were close to bagging themselves all three points after leading from the 15th minute thanks to Martin Spelmann’s early opening goal, but they let their lead slip late on and Burkinabé midfielder Adama Guira was able to snatch a point for the visitors with his first ever league goal for the club in the 86th minute. As a result, SønderjyskE remain one point ahead of Esbjerg, and two ahead of Odense, in ninth place, but they are now without a win in their last five league games ahead of next weekend’s tough clash against København.

Örebro’s fantastic form continues, bringing with it even more excitement at the bottom of the table

Örebro’s majestic form has been the talk of Allsvenskan in recent weeks, with a fantastic winning run stretching back to the middle of July seeing them climb from 14th place to seventh place in just five games.

Before their fantastic run started, it looked certain that last year’s Superettan runners-up were going to be fighting to avoid relegation back to the second tier right up to the last day of the season on November 2nd, but a string of brilliant results, spearheaded by Sierra Leonean striker Alhassan Kamara, has seem them not only all but guarantee their safety but has also given them a chance – albeit a small one – of pushing for a European qualification spot over the remaining six games of the season.

Last week, they beat Kalmar 2-0 to move just behind the struggling side in the table, and this weekend they comfortably won 3-1 against Falkenberg to move above Kalmar, who were thrashed 4-0 at home to Djurgården on Sunday, and into seventh place, just eight points behind Elfsborg, who currently sit in the last of the two Europa League qualification spots in third place.

Örebro’s victory also had important consequences at the bottom of the table, as Falkenberg’s defeat, their fourth in a row, means that they now find themselves in the relegation zone in 15th place after Mjällby picked up their second consecutive victory, extending their important unbeaten run to three games in the process. The win came at home to Elfsborg, as a second goal in as many games for David Löfquist just six minutes into the first half was enough to earn all three points for the Sölvesborg side

As a result, they climb up to 13th place, equal on points with Norrköping, who remain in 14th place after they fought back from 2-0 down to salvage a point against Åtvidaberg on Monday evening, thanks to goals from Edvard Skagestad and Lars Gerson, the latter of which came in the 90th minute, just three minutes after the Luxembourgian striker had come on to the pitch as a late substitute.

After finally exiting the Tippeligaen relegation zone last week thanks to a fantastic 4-1 victory against struggling Strømsgodset, Brann were sent back down towards trouble once again this weekend after they were forced to come from a goal down to draw against bottom side Sandnes Ulf on Friday evening.

Sandnes Ulf, who have only managed to win twice this season, with their last victory coming over three-and-a-half months ago, went ahead early in the second half through recently-signed Icelandic defender Eiður Aron Sigurbjörnsson, but Amin Askar was on hand to equalise for Brann 11 minutes later to deny Sandnes Ulf the chance to move to within three points of 15th place Sogndal.

A win against Sandnes Ulf would have seen Brann finish the weekend in at least 13th place, regardless of what happened in the games involving Sogndal and Haugesund, who both started the week below the Bergensers in 15th and 14th place, respectively, but a brilliant – and, quite frankly, unexpected – 2-1 win for Haugesund at home to third-place Rosenborg on Sunday means that Brann finish the week in the relegation play-off spot in 14th place, one point behind Haugesund, whose victory brought an end to a torrid four-game losing streak.

Fellow relegation candidates Start and Aalesund also picked up vital victories this weekend, with the three points gained by the two sides being enough to send them seven points clear of the relegation zone, thanks to Sogndal’s 3-1 defeat against Sarpsborg 08 on Sunday. Start narrowly beat seventh-place Viking – who have now lost their last three games in a row, leaving them in danger of slipping out of the top half of the table, 1-0 thanks to a 68th-minute Matthías Vilhjálmsson goal, whilst Aalesund comfortably won 3-0 at home to ninth-place Stabæk to extend their unbeaten run to three games.

Strømsgodset have been struggling recently, with their last three consecutive league games before this weekend ending in defeat – all of which came against sides that currently sit in the bottom half of the table – and, as a result, they have found themselves slowly but surely falling down the table, away from a desperately sought after Europa League qualification spot and towards the depths of the top half of the table.

However, Rosenborg’s shock defeat this week gave the reigning champions the perfect opportunity to close the gap between themselves and the third-place side and inject some enthusiasm into their ranks with a strong performance, and that is exactly what they did, as this Saturday they mercilessly thrashed Bodø/Glimt 4-0 at Aspmyra Stadion.

Vieux Sané’s straight red card after only four minutes for a deliberate handball in front of goal left the northern side with a mountain to climb, and Strømsgodset were easily able to make the numerical advantage count, thanks to a brace from Thomas Sørum and late goals from both Iver Fossum and Flamur Kastrati.

Despite now being just two points away from Rosenborg – and, more importantly, a Europa League qualification spot – Strømsgodset are still neck-and-neck with fourth-place Lillestrøm, who pulled off a fantastic 2-0 win at home to Odd on Sunday, thanks to goals from Petter Vaagan Moen and Stian Ringstad.

Odd, who sit six points clear of Rosenborg in second place, have been in superb form this year, and this weekend’s defeat was their first in four-and-a-half months. Ironically, it was Lillestrøm who last beat them before this weekend, with the game at Skagerak Arena in May also ending 2-0 to Kanarifuglene.