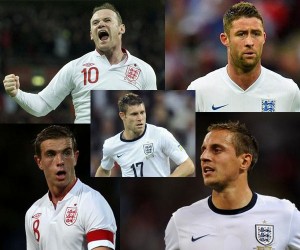 Another World Cup failure down, how many more to go? But who will lead England into the next European Championship and beyond? It takes nerves of steel and blood of ice to be England captain, the focus of all the attention on the pitch. The job is a poisoned chalice, meaning you’re first under the microphone when it all goes wrong, and the barometer for the team’s performance, or lack of it.

So, who will step up now ‘Stevie G’ has ended his reign with over a third of his 114 caps (40 as captain) spent wearing the armband and the pained look of stress, as recent games have run away from him? The next full-time captain will be expected to lead a newer, younger, rising England. One designed to cope with the do-or-die knock out phases of a championship, moving the country away from the good-in-qualifying-against-mid-ranking-Euro-opposition tag.

Having donned the captain’s armband a couple of times this year, Rooney is likely to be the most experienced man on the pitch when England next take t0 the field. He’s seen it all and been there through thick and thin. However, he needs to use all his focus on timing that run, beating the last man, and making sure he’s always harrying for the ball. Is that the kind of player you need as Captain, whose focus needs to be across the whole game? He may be a pundit’s favourite, but we’d rather see him focused on scoring than worrying about the shape of the midfield far behind him.

It came as quite a shock to find out James Milner has been wearing the England shirt since 2009, and now has 47 appearances under his belt. That gives him the experience within the side, and his midfield role puts him closer to the heart of the action. Counting against him is that he’s not a candidate for the captaincy at Manchester City, but is still hitting well above his weight in that star-packed side.

With a great view of the game from the centre of defence, Cahill is limited in experience with only 27 caps. However, he has been under the wing of John Terry, so should be the perfect man to dish out the bollockings and charge forward when needed. He’s also worked up the ranks of hard-working northern sides including Burnley, Sheffield United and Bolton, so should be able to spot a shirker at 30 paces. With an amazing ability to make the last tackle, none of the maliciousness of John Terry, he has the potential to be rated alongside Booby Moore, assuming England get close to winning a tournament.

The captain of Everton has a good shot at being leader of the England team, as one of the few English premier league squad leaders with regular international action. He’s also a regular defensive partner to Gary Cahill and was a good talisman for the national side, unbeaten in 11 before the World Cup. Uncompromising yet calm, on and off the pitch, he gives a good (if toeing-the-party-line) interview. Between the pair of them, one should make a fine England captain, as long as Roy Hodgson future tactics don’t leave them badly exposed, as seen in Brazil.

While managers and captains come and go, if the next England team “grand plan” is keeping an eye on the crazy heat of Qatar in 2022 and Russia in less than four years time, then we need a younger captain who can drive the team onward. That man is probably 24-year old Jordan Henderson, already a captain of the England Under-21 squad and veteran of our last two championship failures. Now a Liverpool regular, who signed him as a future replacement for Steven Gerrard, he’s part of a dynamic midfield and should be a part of the England set up for the best part of a decade.

Giving him the captaincy as soon as possible will see him mature into a solid team leader and help the bright young things in four- and eight-years time through the rough times, and perhaps the glory to come.

I'm Phil I run a website over at OpinionFootball.com Currently doing a few guest posts for Back Page Football. Liverpool fan but also follow the local side Southend.