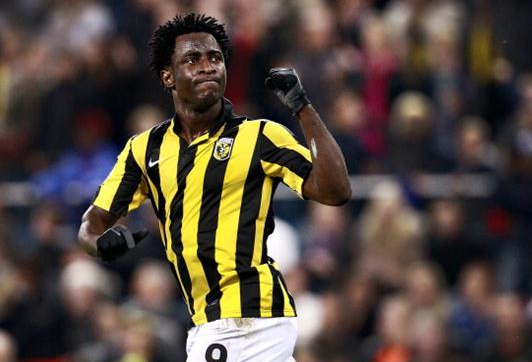 The form of Liverpool forward Luis Suarez has been nothing short of outstanding this season, the Uruguayan surely a leading contender for both the Premier League Golden Boot and the PFA Players’ Player of the Year award. He was signed from Ajax in January 2011, where Suarez scored 111 goals in 159 appearances.

The Eredivisie a league that continues to be a breeding ground for some of European football’s finest talent – it is also very high-scoring, averaging 3.26 goals-per-game last season. Below are five forward players, one from each of this season’s potential title challengers, who have been impressing crowds in the Dutch top flight.

Part of Belgium’s ‘Golden Generation’, the 25-year-old left-winger joined PSV from Utrecht in June 2011, in a deal worth around €5.5m. Merten’s first season in Eindhoven saw him score 21 league goals and provide 14 assists in 33 games.

He also scored in the 11/12 KNVB Beker Final against Heracles and has continued to impress in this season’s Eredivisie, scoring 7 goals and providing 9 assists in 15 games.

Had to wait until February 2011 for his international debut but is now a regular with the Red Devils, perhaps his best moment coming in the 125th Low Countries derby against the Netherlands, where Mertens scored once and laid on two goals as a substitute in a 4-2 win.

A graduate of the Cyrille Domoraud Football Academy in Ivory Coast, the 24-year-old centre-forward joined Vitesse from Sparta Prague in January 2011, in a deal worth around €4m. Bony is the Eredivisie’s current top-scorer with 16 goals in 18 games.

In total he’s scored 36 goals in 57 league games for the Arnhem club, including a brace at the home of reigning Champions Ajax, in a 2-0 win for Vitesse earlier this season.

At international level Bony is seen by many as Didier Drogba’s natural successor, although Anzhi’s Lacina Traore might yet move ahead of him in that particular race – all three are in the Ivory Coast squad for the Africa Cup of Nations.

Learnt his trade in Serbia’s SuperLiga with Vojvodina, making more than 100 league appearances in four seasons before moving to Groningen, the club where Luis Suarez also started out in the Eredivisie.

After two impressive seasons, in which he was an Eredivisie ever-present, Steve McClaren’s FC Twente were persuaded to pay €7.7m for Tadic in June 2012, the Eredivisie’s most expensive transfer of the summer.

After six-months at De Grolsch Veste, the 24-year-old leads the league’s assists chart with 11 in 18 games and is Twente’s joint top-scorer, with 8 goals.

A former team-mate of Suarez, he joined the Ajax youth academy in 2005 and now is now captain since Jan Vertonghen’s move to Tottenham Hotspur – fast approaching his 200th career appearance at the age of 23, de Jong is experienced beyond his years .

His goal-tally has reached double-figures in each of the last three Eredivisie campaigns, despite sometimes being used in midfield – de Jong’s best return being last season when he managed 13 goals in 29 games – at the half-way point of this season he has provided more Eredivisie goals (7) and assists (6) than any other Ajax player.

Enhanced his reputation further in the 12/13 Champions League group stage, with three goals in two games against Manchester City, but still only has one senior international cap for the Netherlands, won back in August 2010.

One of the Eredivisie’s biggest surprises this season, the 27-year-old Italian on-loan from Parma has been outstanding at De Kuip, scoring 14 goals in 14 league games, neatly filling the gap left by John Guidetti’s return to Manchester City at the end of the last campaign.

It means Pelle has already equaled the goals tally he managed in four seasons at AZ (2007-2011), although he does have a league title medal from his time with the Alkmaar club, won under Louis van Gaal in 2008/09.

Standing at 1.93m (6 ft 4 in) tall, the Italian striker caught the eye playing for his country at U20 level back in 2005, scoring 4-times at the FIFA World Youth Championship – U21 recognition followed but without the same success and he is yet to win a senior international cap, although Pelle’s outstanding form this season has even led to calls for him to be given a chance with the Azzurri.