Before you read this column, for just one moment, ask yourself the following:

“Are boys better than me?”

“Why do men get paid more than I do for the same job?”

“Would you prefer to watch me play soccer or your son?”

“Why would you allow me play on plastic but turn the world over so your son can play on real grass?”

Can you look your daughter in the eye and honestly tell her that boys are better?  I cannot, because it is not true.  But a few people believe otherwise.

In case you missed the Women’s World Cup draw, the USA was placed in Group D with powerhouse Sweden, a very strong Australian side and a formidable Nigerian team.  Pundits say they are in the “group of death.”  But this “group” pales in comparison to the tournament organisers and FIFA who could collectively be called “the group of misogynists.”

For the first time in football history; FIFA and Canada have decided that the 2015 Women’s World Cup will be contested on plastic fields instead of natural grass. Abby Wambach, captain of the USWNT (United States Women’s National Team) has filed a gender discrimination lawsuit against FIFA with the support of other professional women footballers.

For a point of reference, the USWNT is one of the most successful national teams in United States history. This is not a team that should need to file a lawsuit to play football on natural grass – they have earned that right. The outcome of the suit should be obvious, but then again, nothing is obvious when FIFA is involved.

Think about it for minute –  playing a World Cup on plastic?

I love the smell of irony when I hear people conveniently using the term “turf” or “artificial turf” to describe plastic playing surfaces.  It is like calling fecal matter “waste,” the act of slaughtering an animal “processing” or saying USSF (United States Soccer Federation) President Sunil Gulati is “the single most important person in the development of soccer in this country”. But facts are facts. “Turf” is still plastic, waste is still … (well, you know) and Gulati is not as important as he or others make him out to be.

Plastic? An artificial surface that every professional footballer around the globe, male or female, has said is wildly inferior to natural grass. Would any professional prefer playing any sport such as tennis, baseball or basketball on plastic?  Sounds stupid, doesn’t it?  It sounds stupid because playing any sport, at its highest level, on plastic is just that – stupid. Yes, there are countless circumstances where plastic fields are necessary and cost effective. But we are not talking about any set of circumstances; we are talking about the World Cup.

It is not as if the problem cannot be solved. In the United States we have had a history of laying real grass sod over plastic for men’s soccer matches. Sometimes our attempts to appease the male soccer gods have yielded ok results. Other times our attempts, like the 2013 CONCACAF (Confederation of North, Central American and Caribbean Association Football) Gold Cup in Dallas were disastrous (but I read the 2013 Gold Cup was a rush job.)

A far better example of successful placement of real grass sod over turf was recently on display in Sweden. In a recent article written by Sarah Gehrke and Linda Eriksson for TSD (The Soccer Desk); Gehrke highlights how Sweden put growing, natural grass down on many plastic fields in preparation for the 2013 UEFA Women’s Championship. I encourage everyone to read this article for all the details, but in short; Sweden has proven that this is a practical, successful and cost effective solution for FIFA and Canada to implement. So why on earth is this benchmark not being followed?

Cost is obviously not an issue when it comes to FIFA. FIFA executives have been bribed in amounts well in excess of what it will cost to lay grass sod over plastic. 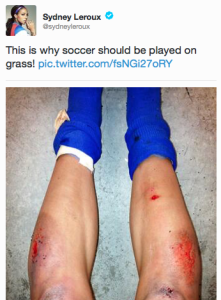 Time or climate is not an issue since Sweden and Canada share almost identical summers, weather and growing seasons. Planning and logistics surrounding the endeavor is certainly not beyond the grasp of the resourceful people of Canada. So why is Canada not solving this problem? Surely Canada would support the women’s cause? As far as Canada is concerned, I do not think they would wilfully do something to create gender inequality.

Unfortunately, they are pretending like nothing is wrong. Not on purpose, of course; but they are far too deep into planning and have had too many glasses of Blatter’s Kool-Aid to do anything. But the fact is, when it comes to professional soccer tournaments at the highest level around the world, men get to play on grass and women are now being told to play on plastic.

What if it was your daughter? What if your daughter had to play on hard, green plastic with a billion tiny black pieces of rubber scattered about this fake surface? These tiny black rubber pieces will invariably get stuck in her shoes, socks, eyes, hair and sometimes end up in her mouth. Natural grass and plastic are not equal. How do you explain to your daughter that it is?

So who, in the football world, should be standing up supporting all woman footballers in advance of the 2015 World Cup?

Right off the bat you would think FIFA would be the champion of the game being played on natural grass. But let’s recall Juice Rap News’ Robert Foster who saw FIFA for who they really are and began calling them “ThieFA”.

Surely, ThieFA would not allow women to play on plastic because they definitely would not force Messi or Ronaldo to play on any make-believe surface. But of course, I am kidding myself.  ThieFA President Sepp Blatter is, practically, a living, breathing, walking cartoon character when it comes to leadership. To prove my point, here are some of Blatter’s most priceless quotes:

Let the women play in more feminine clothes like they do in volleyball. They could, for example, have tighter shorts. Female players are pretty, if you excuse me for saying so, and they already have some different rules to men – such as playing with a lighter ball. That decision was taken to create a more female aesthetic, so why not do it in fashion?

Sepp, does this brain-storm of yours apply to men as well?  I am pretty certain more women will follow football if Ronaldo is sporting a “banana-hammock” on the pitch. How about Blatter’s take on England captain John Terry’s alleged affair with ex-teammate Wayne Bridge’s girlfriend

Listen, this is a special approach in the Anglo-Saxon countries. If this had happened in let’s say Latin countries, then I think he would have been applauded.

Or, Blatter advising how gay fans should behave during the 2022 World Cup in Qatar, where homosexuality is banned.

I would say they should refrain from any sexual activities.

Clearly, we will be waiting for hell to freeze before we can depend on “Sepp the Schlepper” to care, remotely, about women playing on plastic.  So why is FIFA not doing what is right by our daughters?  The truth is, FIFA has absolutely no respect for women and believe they can simply strong arm the women to play on plastic.  This sort of behavior is the very definition of “gender discrimination.”

So who is left to address the gross gender inequality we are subjugating our world-class female athletes? How about Sunil Gulati and the USSF? Why?  In 2013 Gulati was elected to the super secretive FIFA Executive Committee. Of course, the irony in this achievement is that Gulati has now become intimately part of one of the most corrupt organizations on planet earth. Nothing makes a mom prouder than finding out her son just joined the local street gang.

To be fair, I thought Gulati would shake things up a bit when he, seemingly, infiltrated this scandalous bunch. In fact, his first promise was to divulge how much he was getting paid by aforementioned scruff. But on second thought, Gulati decided this was not such a good idea after all and has yet to divulge any information regarding his salary. So let’s not heap any praise on Gulati, or hold out any hope, simply because he is standing tall amongst the ThieFA giants in the face of a warm summer breeze.

In fact, when it came to the women’s lawsuit against FIFA, Gulati said close to nothing. Although according to court documents Gulati indicated that he believed U.S. players risked suspension by FIFA for their legal action. Nothing says “I got your back ladies” like the President of the USSF, hiding behind the FIFA shield, issuing a veiled threat to the very women leading our national team.

Of course, it is easy to say it is not Gulati’s or the USSF’s battle to fight when it comes to women playing on plastic. They have no control over Canada, no control over FIFA and have no right, legal or otherwise, to interfere with an event completely out of their jurisdiction. But who is kidding who? When has America ever backed down from a challenge or let mere technicalities get in the way of righting a wrong?

America has a proud tradition of fighting for the freedoms of others. We fight for democracy and equlity; so why is Gulati and the USSF not fighting for the equality of women, at least our women? 13 United States Senators showed their legitimate concern when they wrote Gulati and Blatter and demanded both use their power to ensure the Women’s World Cup will be played on natural grass. Gulati’s response to the letter thus far has been..nothing.

So ‘money’ is what we are telling our daughters when they come to us asking about gender inequality, right?

Since the mirror of truth revealed gross inequality when it comes to FIFA, let us hold this same mirror up to the USSF with regards to money. To wit, here are 3 numbers to remember:

Yet during the same time period Sundhage’s male counterpart achieved much less but was paid more…much more.

Why?  The mirror of truth, when held up against the USSF reveals yet another reflection of gender inequality against our very own coaches.

You can continue to make all the arguments you want about how “money” drives the entire bus. But is this really the argument you are going to give your daughter? We are the United States.  We stand for something more, we stand for equality. Perhaps the USSF forgot what the first two letters of their name stands for.

However, if the USSF continues to align itself with misogynists such as FIFA, if it continues to pay our women’s coaches less than their male counterparts and if they force our daughters to play on plastic; the first two letters of the USSF may begin to look more like the “Unseemly Sexist Soccer Federation.”

Before you finish reading this column, for just one moment, forget all the legal lingo, forget whether or not plastic is more dangerous, more inferior to grass, forget that some professional teams already play on turf, forget past precedent, forget ThieFA, forget the USSF, forget all the money involved…forget everything.

For just one moment answer this one question:  If the men were to play the 2018 World Cup in Canada would they be forced to play on plastic or would they be playing on natural grass?

You know the answer… so does your daughter, your sister, your wife.

What are you going to tell her when she comes to you and asks …?

2 thoughts on “Does FIFA + USSF = Inequality towards women?”