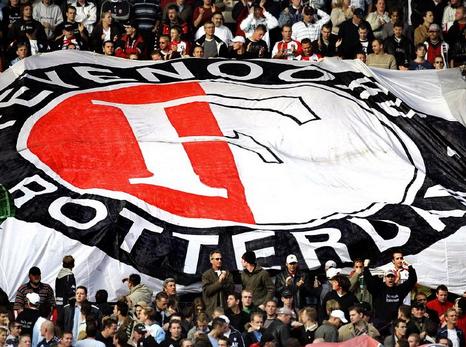 Just nine short years ago, Feyenoord were one of the finest teams in Europe having won the UEFA Cup. Less than six years ago they were still amongst the best sides in the Eredivisie, and regular competitors in Europe. Even last season there was a credible fourth placed finish for De club van Zuid. This year there is a very realistic threat of relegation for the first time in their history.

Coach Mario Been maintains that there is no chance of relegation, swearing that “I am sure we will stay up. Feyenoord will never be relegated”. These strong words came back in November, in the wake of the club’s now infamous 10-0 destruction at the hands of traditional title rivals, PSV. After a vote of confidence that appeared far more heartfelt than the cliché suggests, there was an assertion that things could only get better.

While the humiliation of the PSV result had taken its toll on Feyenoord’s reputation, it initially appeared to have also had a galvanising effect. Having won just one game in the ten matches preceding the match in Eindhoven, Been’s side were victorious in three of the next eight, losing just twice at AZ and Groningen. The same signs of fragility were apparent – particularly in Ricky Van Haaren’s generous own goal equaliser that handed a desperate Willem II a point – but an improvement in performance and attitude seemed to signal that the darkest days were behind them.

Since the return of the Eredivisie from its winter hibernation, it appears as if Feyenoord’s progress has stalled once again. Ajax were far more comfortable than their 2-0 Klassieker victory last week suggests, while Leon Broekhof plundered an 88th minute win for De Graafschap at De Kuip on Saturday. The prospect of a trip to title chasing Twente (say that quickly three times!) will hardly be of encouragement to Been ahead of a potentially era-defining clash with Vitesse in a fortnight’s time. Feyenoord currently sit in 14th position, just four points above a relegation playoff place and just two ahead of Arnhem.

What went wrong? Years of financial mismanagement left Feyenoord with a dearth of experienced players, and debts of anything between £30m-£40m, forcing the current over-reliance on the famous youth policy. The average age of the midfield this season is just 20 years old, and while the club have undoubtedly unearthed potential superstars in Luc Castaignos and viral video sensation Georginio Wijnaldum, their tender years are ill suited to the attritional war they now find themselves in. The pair have just thirty eight years between them, but are the only players at Feyenoord to have scored more than two goals this term. To further underline the problems , the De Kuip side have yet to win away from home this season.

Still there is hope. The only automatic relegation place in the division is being fought over (if that is the right word) by two of the worst sides in recent Eredivie history. Willem II actually managed to win this weekend, with a 1-0 victory over Vitesse being their first in twenty attempts this season. Remarkably, the three points put them within another victory of VVV, who have garnered just four points in their last thirteen league matches. Clearly, there is having a terrible season and then having a terrible season.

At the opposite end of the division, PSV have picked up where they left off, winning 3-0 at VVV thanks in no small part to the ever improving Jeremain Lens who scored one and set up another. The Eindhoven side sit one point ahead of Twente, who seem to have put an uncertain final two months of 2010 behind them, by easing past Heracles and besting Groningen, scoring seven goals in the process. Six of which have come from behemoth Austrian striker Marc Janko.

Ajax’s title aspirations were given yet further setback as they were comprehensively beaten for the first time under Frank de Boer. Utrecht hosted the Amsterdam club, and ran out 3-0 winners, strengthening their case for the UEFA Cup playoff spot. There were wins for Roda JC and Den Haag, while NEC’s Belgian striker and Asterix sound-a-like Bjorn Vleminckx scored his sixteenth goal of the season, and ninth in ten games, in the 2-2 draw with NAC Breda.

4 thoughts on “Feyenoord, Janko & the worst team in Holland”