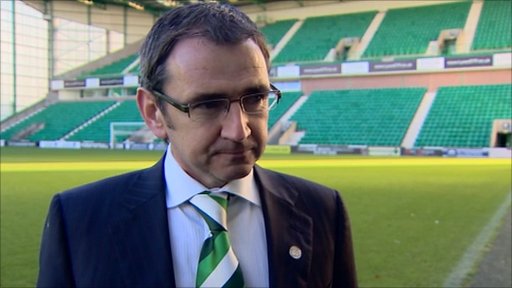 Hibernian’s dramatic 3-2 away victory over Inverness Caledonian Thistle on April Fools’ Day could prove to be a defining moment in the managerial career of Pat Fenlon.

Fenlon arrived in Scotland in November with nine years of management in Ireland under his belt. During that time he won five League of Ireland titles and three domestic cups with two different sides, Shelbourne and Bohemians.

Winning trophies is not Pat’s primary objective at Hibs (although on that front they do have a Scottish Cup semi-final to look forward to). His challenge in Scotland is to survive the relegation battle his side are embroiled in. And on that front, Hibs have been tethering on the brink for quite some time.

Fenlon’s 16 games at the Hibs helm have yielded less points than the 16 games that preceded his appointment at Easter Road this season. Yet, despite the 43-year-old Irish manager’s struggles, the win at Inverness has widened the gap over bottom side Dunfermline to six points, with just six games left to be played. There was a mere two points between the sides when Fenlon first took charge on November 25th.

Keeping Hibs afloat in the Scottish Premier League was always going to be an arduous task for Fenlon, but it’s a task that Pat may well complete even if his arrival hasn’t exactly set the SPL alight thus far.

He has helped the Edinburgh club to just 12 points from 16 games, via three wins and three draws. This compares unfavourably to Hibs’ record pre-Pat this season; with three wins and five draws Hibs had amassed a slightly better 14 points from their first 16 games of the campaign.

The football hasn’t really improved either. Fenlon’s Hibs have leaked a woeful 35 goals, with 17 scored in response. Hibs’ defensive record was better under the previous regime as they conceded 26 and scored one less than Fenlon’s team, in the same amount of games.

Of course, this isn’t really Fenlon’s team at all. He inherited a poor side from former manager Colin Calderwood and Hibs fans can be content that Fenlon has improved on the only statistic that really matters: the gap between them and Dunfermline.

Fenlon follows in the footsteps of current Shamrock Rovers manager Stephen Kenny, the last gaffer to leave Irish shores for pastures new in the SPL. Kenny had an ill-fated stint with Dunfermline from late 2006 to December 2007, suffering relegation from the top flight and then struggling in the lower division before returning to Ireland.

Fenlon, for all his toils and troubles, has given himself every chance of becoming a League of Ireland success story abroad. The Scottish Cup gives him the unlikely chance to write himself into Hibs’ folklore. Six points clear of relegation with six games to go, should Hibs survive then Fenlon will have a first full season to look forward to in the SPL and should that prove to be a success all kinds of doors could open for the former Shelbourne, Derry City and Bohemians manager.