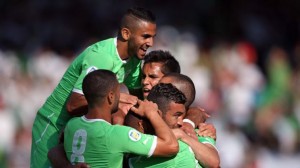 The pot compilation of yesterday’s 2015 African Cup of Nations draw always meant a strong viability for a series of heavy weight assortments, yet for the majority of sides assigned a spot in Group C their hand represented the nightmare assignment.

The inevitably dubbed group of death compiles the intimidating quintet of Algeria, Ghana, South Africa and Senegal. If Algeria – undoubtedly Africa’s standout outfit in Brazil last summer and the continent’s highest ranked side – are to clinch a first crown in 22 years they must now do it the hard way. That being said as arduous as Algeria’s examination might appear, for their three opponents the Fennec Foxes represent the worst case scenario.

Vahid Halilhodžić departed post World Cup, yet Christian Gourcuff’s inception has passed seamlessly, with Algeria advancing to January’s show piece with minimal fuss. Arguably Gourcuff can boast the only side travelling to Equatorial Guinea shy of substantial weakness, whilst in Yacine Brahimi he can also vaunt a player who on current form provides unrivalled x-factor.

The draw hasn’t been kind – should they progress the quarter-finals are unlikely to receive rest bite with either Cameroon or Ivory Coast liable to be in wait – however whereas Gourcuff is left with mere fine tuning in advance of the tournament question marks hang over all of Algeria’s group stage opponents.

Ghana in particular look vulnerable to the treacherous group, with the appointment of Avram Grant doing little to appease a fan base still disgruntled by Ghana’s circus like showing in Brazil. In qualification the Blacks Stars did enough to progress without alarm, however both goalkeeping and defensive problems remained a prominent theme – at the same time Ghana continued to epitomize a collection of individuals rather than a cohesive unit.

By contrast under Shakes Mashaba South Africa represent an outfit rejuvenated from the one who were ousted by Ethiopia in World Cup qualification, with Bafana Bafana negotiating qualification unbeaten. To what degree that form was influenced by a relatively weak group combined with a Nigeria side in turmoil is difficult to establish.

To a wider audience, South Africa will be viewed as group outsiders, however qualification has heightened expectations back home and how they channel that expectation could be the defining factor in whether Mashaba’s side reach the knockout stages for only the second time in over a decade.

Senegal have similarly endured a desperate recent AFCON history, yet a talent littered squad meant they entered Wednesday’s draw as a threatening dark horses. A lack of ability however has not been Senegal’s major stumbling block during a baron last decade, with the Teranga Lions persistently being plagued by a failure to mould their rich resources into something equal those expansive parts. Qualification though hinted Alain Giresse is beginning to reverse that trend, making Senegal hazardous tournament floaters.

It is plausible that the group’s opening fixture between Senegal and Ghana could be pivotal to how proceedings unfold, defeat would likely plummet the black stars into disarray whilst for Senegal a momentum generating victory has the potential to platform them towards an assault on a first ever AFCON title.

Elsewhere Herve Renard’s Ivory Coast have plenty of reason to feel tentative, given they have been paired alongside a reinvigorated Cameroon side who ruthlessly exposed their defensive frailties during a 4-1 mauling of the Elephants in Yaoundé back in qualification’s early stages.

To add to their anxieties, Guinea also possess the attacking assets to expose that creaking backline, whilst that the Syli Nationale – who defied the odds in making it this far – enter the competition free of expectation only intensifies their threat. Fourth in 2012 and 2013 Mali complete Group D’s line-up, although there is a nagging feeling that the current generation is one the midst of a decline.

The fearsome Group C assortment meant inevitably slightly weaker collections elsewhere, with those allocated a slot in Group A liable to be most satisfied with their hand. Hosts Equatorial Guinea are joined by Congo, Burkina Faso and Gabon. The Congolese are appearing in their first final since 2000 and might have been eliminated before the group stage of qualification commenced had Rwanda not been eliminated for the fielding of an ineligible player.

Burkina Faso and Gabon met in qualification, with latter prospering to top their respective group. Both will now be targeting at least a quarter-final berth, with the perception of the latter being dark horses only increasing following the generous draw. The Gabonese possess pace in abundance and thus carry the potential to wreak havoc on the counter, at the same time that they remain largely under the radar means there is potential for opposing sides to entertain those strengths.

Finally Group B presents an intriguing proposition, with all four sides harbouring genuine progression aspirations. Tunisia competing in their 12th consecutive finals – the longest current sequence of successive appearances – are arguably favourites, with the Eagles of Carthage able to vaunt a squad capable of advancing to the semi-finals for the first time in six tournaments. The manner in which Tunisia toppled both Senegal and Egypt in qualification vindication of those weighty expectations.

Cape Verde having made the last eight on their competition debut are no longer unknowns and will the bulk of that golden generation remaining intact their prospects of repeating that momentous accomplishment appear credible. 2012 champions Zambia appeared likely to miss only their second finals in 14 attempts, yet three successive victories – including a 1-0 triumph against already qualified Cape Verde – means Chipolopolo visit Equatorial Guinea in buoyant mood.

DR Congo complete Group B and although only advancing via the backdoor route of best third placed finishers makes them slight outsiders, the leopards vibrant frontline means they can’t be discounted.

The draw has thrown up a plethora of enticing fixtures none more so than Group C, however each group in its own right carries substantial charm. Algeria rightly so remain narrow favourites, nonetheless the impending AFCON even by its own unpredictable standards remains hugely problematic to call with over half a dozen sides holding realistic trophy lofting ambitions.