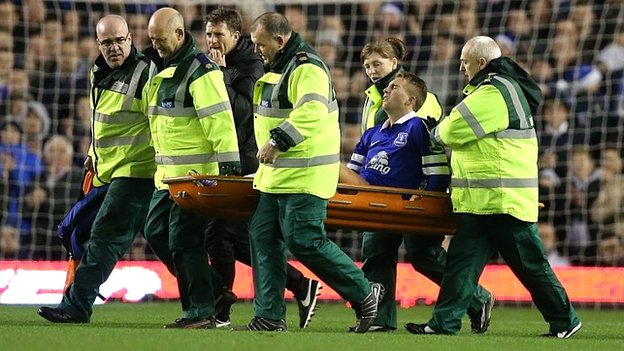 Just as Gerard Deulofeu cemented his place in Roberto Martinez’s first XI – amid talk that Barcelona would extend his time at Goodison Park – the 19-year-old suffered a hamstring injury.

In truth, it has been one of the few injuries Deulofeu has suffered in his career – despite playing in a hazardous, vulnerable position on the flank throughout the two years of his senior career.

Yet, there was a cruel irony in that fact: Deulofeu, far from a quintessential La Masia graduate – 5ft 11in with huge upper body strength – has already proven himself a potent Premier League player.

Sure, few doubted his ability or trickery before his arrival, but the Spaniard has thrived amid the discipline, physicality and shackles of the Premier League.

Much, of course, is owed to Martinez who was patient and, quite smartly, eased Deulofeu in.

After all, having played just 53 minutes of Premier League football in his first three months of English football, the patient teenager has since gone on to prove Everton’s livewire this winter.

Striking fear into leggy fullbacks late into matches with his pace, Deulofeu’s attitude was to be applauded – forcing Martinez into action.

The result was two starts in the past four games, with Deulofeu, wisely, being protected for the difficult Manchester United and Arsenal away trips.

Yet even in those matches, the 19-year-old came on, proved a nuisance and scored a crucial equaliser at the Emirates.

So, given that the last La Masia graduate to go out on loan – before breaking into Barcelona’s first-team – was Luis Garcia at Valladolid in 1999, Deulofeu already looks a potential star in the making.

Yet, should it be a surprise? This, after all, is Barcelona’s most highly-rated La Masia graduate since Lionel Messi in 2004 and a player who, at just 14, signed a €140,000 contract with Nike.

Unlike false dawns such as Bojan Krkić, Giovani dos Santos and Gai Assulin, there was a genuine belief within La Masia that Deulofeu could make the step up.

The signs, and evidence, at Everton suggest he may just do that.

After all, rather than rest on his laurels with the odd Copa del Rey appearance at the Nou Camp – amid a newly-inked four-year deal – Deulofeu, bravely, decided to test himself in the Premier League.

Following the £48.5 million arrival of Neymar, this was testament to Deulofeu’s immense hunger.

Witnessing Thiago Alcantara’s determination to leave the Nou Camp will have served as a warning to Barcelona and with Deulofeu having enjoyed his time England, there is no guarantee the Catalan will return home.

Yet, if Deulofeu – as it seems – stays at Goodison for another season, it may well be the perfect time to return to Barcelona.

Here is a club, after all, that is having something of an identity crisis under Gerardo Martin.

Also, even more importantly – with the Puyol-Xavi-Iniesta trivet entering their final years – now, more than ever, Barcelona need an academy product to step up.

Then, there is the small matter of further improvement under Martinez at one of Europe’s form teams, Everton.

After all, it cannot be understated how remarkable Martinez’s record of developing loanees is.

From Paul Anderson and Jordi Gómez at Swansea to Ali Al-Habsi and Tom Cleverley at Wigan, Martínez  has an eye for a talent who can thrill without the shackles of a parent club.

This will give hope to Deulofeu: the past few weeks were not the pinnacle.