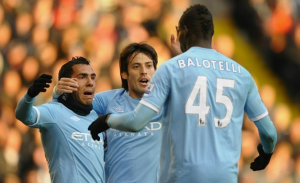 Anyone who has read this column before knows I try to look at trends through an analytical lens rather than the standard hunches and rhetoric. This week though we’ve been treated to a new form of mantra, a life lesson by one of the great thinkers of our time. “Winning” by Charlie Sheen.

So where I am going with this? Surely he’s not going to use Sheen’s ramblings as fantasy advice? Damn right I am! It’s all about winning. No you don’t need tiger blood or fire breathing fists but you do need to bury your preconceptions and accept some hard truths:

But, as even Charlie Sheen knows, winning starts right now so without further delay let’s look at this week’s rankings.

Captain Stats
Arsenal’s injury problems come at a bad time for fantasy players as many held them through their off week in order to capitalise on their upcoming games but now Van Persie, Walcott and Fabregas will miss this week’s game with the former pair out for even longer than that. Despite topping the predicted scoring charts this week then, it is tough to find too many Gunners worthy of the arm band.

Carlos Tevez – This is where most players will settle this week and on fixture alone they aren’t far wrong. Tevez started very slowly at home but he has added 2 big games in his last 3 at Eastlands (5 goals in 3 games) and is as good form as any of the big name strikers right now (perhaps just behind Rooney).

Mario Balotelli – 2 goals in a week for Balotelli might act as a reminder for Mancini that Super Mario is still around though he is of course a risky proposition to captain. If you need to take a risk though his ceiling is sky high and in the 8 games he has played an hour or more he has 6 goals including 4 in his last two games (both at home).

Wayne Rooney – The in form striker in the league right now, Rooney has 5 goals in his last 5 games and is close to the form he has struggled to show since a year ago. Having fallen apart down the stretch last year due to injury (and a subsequent rushed return) it would be some form of consolation for Rooney if he could finish strong this year. Based on fixtures I see Rooney as the best long term replacement for Van Persie too.

Dimitar Berbatov – Given his history of being benched against the best teams, I can’t back Berbatov this week.

Nani – The fixture isn’t great and Nani has struggled away from home but he remains the best midfield option in the game and so deserves some attention. His last two road games have given him 18 points and he has 4 goals in the last 7 overall. Not the slam dunk he has been of late but still right up there despite the tricky game.

Marouane Chamakh – Appeared to have fallen off the face of the earth of late with just 35 minutes in the 8 games since the Arsenal squad got fit but now they have injuries again, he could be back in the fantasy lime light. He was on the scoresheet last night against Leyton Orient and should be locked in for a start this week. When starting he added 4 goals in 7 home games so he is at least worth a thought if you have Van Persie and cannot stretch to one of the pricier options above.

Didier Drogba – I’m not sure what’s wrong with him but the arrival or Torres hasn’t helped and Drogba is not own-able never mind captain-able right now.

Good luck for the week ahead and remember, its all about winning.

Chris is a Fantasy Football expert, and blogs on http://premierleaguefantasy.blogspot.com/