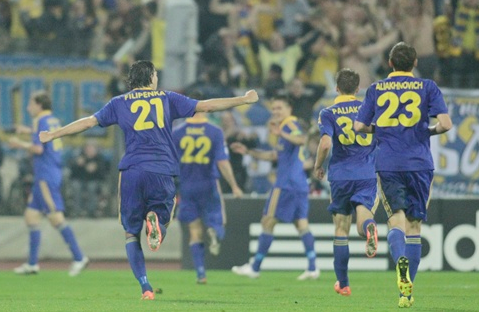 It’s easy to forget that the all-conquering magicians of Europe Bayern Munich began their romp to the continental crown last season as the victims of a remarkable conjuring act. A startling result, which saw the grand masters beaten 3-1 in the former Soviet province of Borisov by a team who had never before tasted victory at Europe’s top table, might for all the world have been an illusion mechanised by Belarusian champions BATE for the benefit and bemusement of the world’s press. Not so much a rabbit out of a hat as a tractor, the likes of which are produced at the Borisov Auto Electric plant from where the club draws its name, bursting from the toe of a delicately stitched Bavarian stocking.

Fingers were pointed. Some accusingly such as the ones directed at ageing Bayern coach Jupp Heynckes for failing to dust off his players from their heart-breaking defeat to Chelsea in the final three months before, but much of the attention was positive. Europe wondered if here wasn’t a minnow capable of shaking up the international order, hamstringing some of the certainties that had come to envelope the continental game, ready to continue the fine work done by unlikely quarter-finalists APOEL the previous season. That hope burned brightly for a time, but as winter began to settle in the westerly tip of the former USSR BATE crashed out of the Champions League and that hope fizzled. Now, a year on and with the domestic game caught in a three-way tussle between two organisations who see little place for the Football Federation of Belarus amongst grand designs for their own futures, there seems little to keep the pall bearers of a dying national sport warm.

The FFB are the committee that nobody wants to love. Or rather the game that they organise and administer is deemed to be unprofitable, either financially or politically, by those whose mandate it is to offer support, guidance and backing. It’s no secret that the UEFA business model heaps lavish rewards on those who are already richly resourced to succeed – the better you do the better you are likely to do. The market pool from which broadcast contracts are paid up is stacked heavily in favour of those at the top by channelling money relative to the sums paid by domestic broadcast markets. Backscratching works very well for lining the pockets of industry leaders, but for Belarus whose contribution to the market pool is strictly limited by the size, and priorities, of a state dominated broadcast network there is little to be found in the arrangement to help the eastern minnows grease their way up the ladder or drastically improve the infrastructures of the domestic game.

A comparison with Bayern provides stark relief. BATE collected a shade under €11million in TV and prize money from their foray into last season’s group stage on a run which took in 12 games, including three rounds of qualifying. Bayern played one extra match en route to winning the title and pocketed over €55million. It would be a tight call to say whose was the finer achievement but success in UEFA’s book is neatly defined.

Were a greater share of the money pie to find its way from Nyon to Minsk it’s far from certain that it would filter its way into the coffers of the FFB. The national team, like all top-level sport in Belarus, is administered by an arm of the state and clubs like BATE are owned and run by members of a tight political inner-sanctum, at the centre of which sits the man famously described by Washington as Europe’s last dictator, Alexander Lukashenko. In the dark and bureaucratic world of Belarusian politics football has few friends. Rough participation figures show the game to be the country’s most popular but on the terraces Lukashenko sees an insidious threat to his hold on power and so neither the clubs nor the national team receive the kind of financial investment that a fledgling football community in a young country needs in order to grow.

As the game’s infrastructure crumbles so too do the stadia, which rarely see more than 2,000 in attendance for a top-flight game and have become a breeding ground for violent dissent directed against Lukashenko’s autocratic rule. As regulations have tightened around the Ultras that have taken ownership of the game more and more draconian legislation has come into force to silence the crowds, which in turn causes more moderate supporters to stay away. It’s a destructive cycle that is threatening to turn football into a battle ground for an angry, voiceless people against a state that refuses to hear them.

Public transport carrying fans to matches will regularly be detained until after kick-off time to keep fans away from games and violent clashes between Ultras and riot police are becoming less rare. Many fans say those outbursts are made inevitable by the kind of provocative legislation that forbids banners being unfurled in English because the police are unable to judge their dissident content, a ruling which in itself leads right to the heart of the failing football community in Belarus. Lukashenko looks down on football as a hotbed for protest and reaction, a situation made worse by the constant bludgeoning of a shrinking football culture that feels it has more and more to protest about. The relationship between the Ultras and the regime isn’t likely to improve any time soon.

With the World Ice Hockey Championships due in Minsk in May of next year Lukashenko is on a mission to sanitise the capital before the world’s glare fixes and funding is being channelled overwhelmingly into hockey infrastructure, partly into building and renovation work on the Minsk and Chizhovka Arenas that will host the championships, but also into the construction of thirty ‘ice palaces’ around the country as Lukashenko looks to establish hockey as Belarus’s most followed, and less combustible, sport. The numbers are already on the president’s side; €11million is being invested in the two week tournament next summer, whilst leading Continental Hockey League outfit Dynamo Minsk operate off a yearly budget of €24million. BATE, for there excursions into the Champions League, make do with just €8million annually.

Football as a cultural and commercial force is wilting. A state monopoly over broadcasting means trivial sums are paid to UEFA to screen European games which in the great Chinese finger trap that is corporate soccer media sales means even the country’s most successful side aren’t going to be getting a bigger pay-out from the top table any time soon. The domestic game needs backing at home in order to grow into a sustainable force that the public want to engage with but with Lukashenko choking off capital and fomenting violent protest there is little hope of anyone within the game locating and then harnessing the potential for a revival. Memories of that famous night against Bayern may have to sustain the faithful for many more winters to come.

One thought on “False promise”