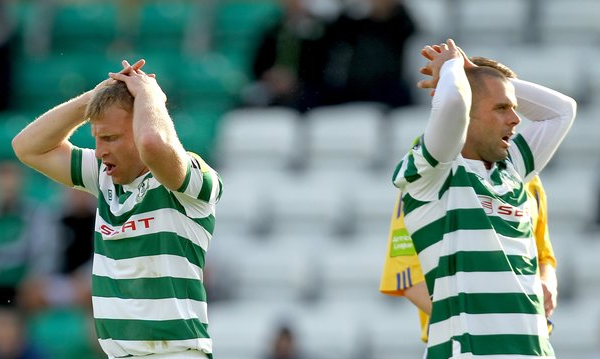 On Tuesday night, I withstood the cold, the wind and the rain to watch Shamrock Rovers beat a callow UCD side 3-0 in Tallaght Stadium, but I was only one of perhaps 500.

Twenty minutes up the road, an announced attendance of just 931 watched St Patrick’s Athletic all but confirm European football for next season with a comprehensive win over Dublin rivals Bohemians.

There were mitigating factors aplenty – a school night, the foul weather, lengthy delays after a truck caught fire on the M50 during rush hour, the relative unattractiveness of the fixtures and Champions League football on TV – but it was a disappointing night for all concerned.

And that was before many of us arrived home to find the Chief Executive of the national association had spent his evening not attending one of games in the league his organisation is responsible for, but was a few miles up the road doing a live interview on RTE Radio.

In his interview with rugby broadcaster Hugh Cahill – which can be played back on the RTE website – John Delaney defended the FAI’s stewardship of domestic football, referring to the League of Ireland as a “difficult child” for the association.

While it’s unfortunate that Delaney chose to frame his argument in such crass and possibly insulting terms, it is undoubtedly true that the League of Ireland has been a constant unwanted headache for the association.

He correctly pointed out that the league was in a state of chaos when the FAI took control of its affairs in 2006, with clubs spending wildly beyond their means and a number teetering around the brink of collapse.

While a number of clubs have gone under in the intervening years – a few of the luckier ones were able to resurrect themselves in a more sustainable form – it’s true that the FAI’s strict has been vital in transforming a league with a seven-figure annual deficit to one whose clubs more or less break even.

A key determinant in that fiscal rectitude has been the pre-approval of annual budgets by the league and the imposition of a cap on salaries at 65% of revenue – effectively ensuring that the only way a club can get into trouble is as a result of poor revenue projections or fiddling the books (predictably, both have occurred).

The initial effect of curtailing spending was an exodus of many of the league’s best performers to England and Scotland – first, following the forced relegation of Shelbourne in 2006, and again in 2009 when a similar fate met Cork City and Derry City – but gradually the standard has recovered as the clubs have become financially stable enough to pay players consistently.

An apt extension of the metaphor might therefore be that while the League of Ireland has been a difficult child for the FAI, the association has been something of a reluctant father – a father who has been pushed into the role of the disciplinarian when he’d rather be hanging out at the yacht club and proudly showing off photos of his independently successful kid.

The trouble is, then, that although the standard of the league is steadily increasing – and the proportion of the national team to come up through the league is increasing more quickly – the domestic game and the national association remain in an uneasy alliance built as much upon fear of the alternative as it is mutual respect, and neither seems to trust the other enough to plot a realistic route forward.

This uneasy alliance has brought about the necessary step of making the remaining clubs more or less fiscally sustainable but, though Michael Noonan might beg to differ, the reality is that when you cut costs and reduce your spending, inevitably you’re going to make it more difficult to bring money back in.

The welcome sight of 5,000+ packed in to Turner’s Cross for some of Cork City’s home games this season has been a welcome boon to domestic football, and the club’s PR and marketing people have rightly been lauded for their terrific work in promoting the club in a positive light – but the very fact it’s seen as remarkable underlines the fact when companies are operating on a shoestring, marketing is rarely a priority.

That’s an area where the association could – and should – have taken on a leadership role, as it alone in the game in this country has the means, the muscle and the expertise to market the league effectively.

The association’s sole contribution? Delaney’s claim (which he has made repeatedly) that he turned down RTE when they offered him €4 million NOT to cover the league at all – a frankly ridiculous claim that has been more or less accepted without any sort of logical scrutiny or investigation.

It’s not the only area where the tightening of purse-strings has led to clubs effectively sabotaging their own revenue prospects in order to save money. The league season lasts for just 40 weeks to suit clubs who would rather not employ staff for 52 weeks, in order to save a few quid –they can offer less money, knowing a lot of players can fall back on the dole over Christmas.

By the end of this season, Dundalk, St Patrick’s Athletic and Shamrock Rovers will each have played over 50 competitive games in about 34 weeks, meaning they’ll have played up to 20 games during the week when fans are least able to travel and attend games. The season is simply too short to accommodate the number of games some clubs are expected to play.

Going back to Tuesday night, the most frustrating aspect is that the fixtures needn’t have taken place on a midweek night at all. Rovers’ meeting with UCD had been re-scheduled following the former’s EA Sports Cup final appearance last month, while Pat’s had to bring their tie with Bohemians forward to accommodate their FAI Cup semi against Finn Harps on Sunday.

It’s a perennial problem at this time of year, where teams that are successful in cup competitions face a game every three days, primarily because it suits the short-term interests of the majority to shave a few weeks off the payroll – the savings obviously outweigh the revenue lost, but it can’t be a long-term solution.

On Tuesday night, Delaney reiterated his view that the clubs need to do more to promote themselves, more to foster links with the local community and more to create positive relations with underage clubs. And he’s dead right – clubs can’t just sit back and expect to attract support and success.

But neither can they be expected to create a culture of success when the system is effectively encouraging them to retard their own growth prospects, and that’s where it is absolutely vital that the FAI take an active leadership role and help the clubs to set themselves on a path towards something better than mere survival.

Irish Sports Council head John Treacy described the FAI this week as the “least well-organised” of the three major field sport organisations in this country, and this was partly down to the lack of organisation right down the command chain to the clubs.

While the League of Ireland is nominally a semi-professional organisation at the higher level, it’s not run like one – each club, before they’ve even kicked a ball, pay €19,000 apiece to the FAI just to compete in the league. There are essentially paying subs for the right to play football – just like a Sunday league player or a schoolboy pays a few quid each week to cover the cost of the pitch.

How can clubs hope to prosper when they need to finish in the upper reaches of the league just to get their deposit back? It’s not as if the league is a financial burden on the FAI, as between subscriptions, sponsorship money, their take of the gate in FAI and EA Sports Cup games and the vast array of fines issued to clubs, it would be a surprise if they weren’t turning a tidy profit.