While some fans of rival clubs saw it as a minor propaganda victory, in truth it was another harsh lesson for Irish football fans.

Whereas clubs like Celtic and Legia Warsaw can afford to absorb relatively minor fines for relatively futile political statements, any fine in excess of an average home gate and not far short of the annual salary of a squad player is a cruel knock on any club in this country.

Which is why it’s a welcome – if somewhat surprising – turnaround to see UEFA come good on two fronts for domestic football. 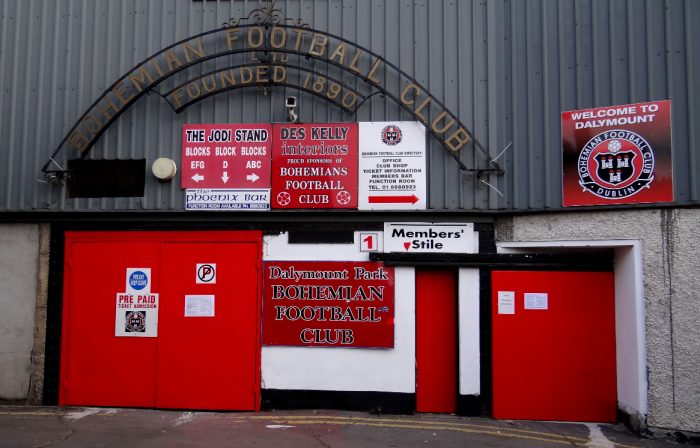 The first instance sees the combined €24 million in fines levied by UEFA for Financial Fair Play (FPP) violations – the majority of it from Manchester City and Paris St Germain – doled out to participants its Champions League and Europa League tournaments.

While the bulk of the money has been allocated to finalists in the tournaments, those who are arguably least in need of it, a welcome bonus for Irish clubs is the decision to allocate just over €30,000 to each club eliminated in the qualifying rounds of last year’s tournament, meaning 2012 champions Sligo Rovers, St Patrick’s Athletic, Drogheda United and Derry City all stand to benefit from a helpful windfall.

The second piece was rather less expected, and concerns the FAI’s much-trumpeted bid to host four games at the 2020 European Championships, and the news that John Delaney has earmarked a UEFA grant to renovate the former home of Irish football, Dalymount Park, the decrepit home of Bohemians, and potentially move in north Dublin neighbours Shelbourne on a ground-share.

What this means for Tolka Park, the long-established home of Shels – which has fallen into prolapsed dilapidation in recent years – is unknown. Shelbourne sold their long-term lease from Dublin City Council in 2006, but they’ve continued to use the increasingly rundown stadium in the interim.

That the FAI should come to the rescue of Dalymount Park is ironic, given that the Bohemians originally came into receipt of the ground back in the 1980s for the prize sum of £1 when the association sought to absolve itself of the responsibility for the ailing ground.

Needless to say, it hasn’t thrived in private ownership. While the home Jodi Stand is one of the better examples in Irish football, the Shed is barely adequate, while the Connaught End and Traway Terrace are condemned. Likewise, only the Richmond Road and Drumcondra Stands in Tolka are safe to house supporters. Some legacy for two of Ireland’s most famous football stadiums.

Delaney didn’t disclose the details of his plan to the media. He made vague reference to a debt-free Bohemians and Shelbourne being necessary for Irish football, but made no mention of whether the FAI was prepared to take equity as part of any investment into Dalymount, however it’s difficult to see any other option.

Bohemians’ latest accounts make for poor reading. The club have made the brave decision to write down €4 million on the value of Dalymount, which leaves them a net balance sheet of almost €2 million, while annual interest payments of €150,000 mean they continue to leak money in spite of a gross profit of €75,000.

It’s difficult to see how the club can survive without finding some way to liberate itself from the burden of its only asset.

I’ve had the pleasure of standing in the away section of two of Ireland’s Premier Division grounds in the past week – Oriel Park for Saturday’s EA Sports Cup final and Dalymount for the visit of Shamrock Rovers in the league – and to call either ‘rudimentary’ would be an undeserved compliment.

Most supporters in the league prefer to stand than sit in any situation – in contrast to leagues across the water – but the choice in the majority of away sections is taken away by the quality of seating in both grounds.

In the Shed in Dalymount, the seats have long since ceased to serve any significant function, as one fan found when the back of a seat folded like rubber under his standing foot, while the seats in Oriel couldn’t support a sitting adult without the potential for a pelvic injury. They’re not fit for purpose.

Of the 19 grounds in use by League of Ireland clubs, only Tallaght Stadium, Turner’s Cross, the Showgrounds and perhaps the RSC could claim to be fit to host family events – and only Tallaght Stadium offers sanitary toilet facilities for both men and women in home and away sections.

It’s telling that of those four grounds, two (Tallaght and the RSC) are municipal facilities and one (Turner’s Cross) is owned the Munster FA. Sligo’s Showgrounds is held in trust by the people of Sligo and is the only one of the four to be held and maintained by the home club.

With that sole exception, every stadium owned and operated by a private club is in a state of disrepair, which raises the question of whether a multi-million pound investment in one stadium in the capital will make a dent in the infrastructural problems that face the league as a whole.

It’s easy to see why the FAI and Delaney would want to attach themselves to Dalymount as a vanity project. The Chief Executive’s reign won’t last forever and he, like UEFA, is determined to leave a legacy – and Dalymount might just be the ticket.

Certainly, the FAI’s custodianship of the League of Ireland has only been a success by comparison to the previous club-led regime, which is to say it’s been marginally less disastrous, so the only real option for a lasting legacy lies in stone and the restoration of the spiritual home of Irish football.

Whether it ever comes to pass is another discussion entirely.

5 thoughts on “The FAI promise to renovate Dalymount Park – but what will it really achieve?”