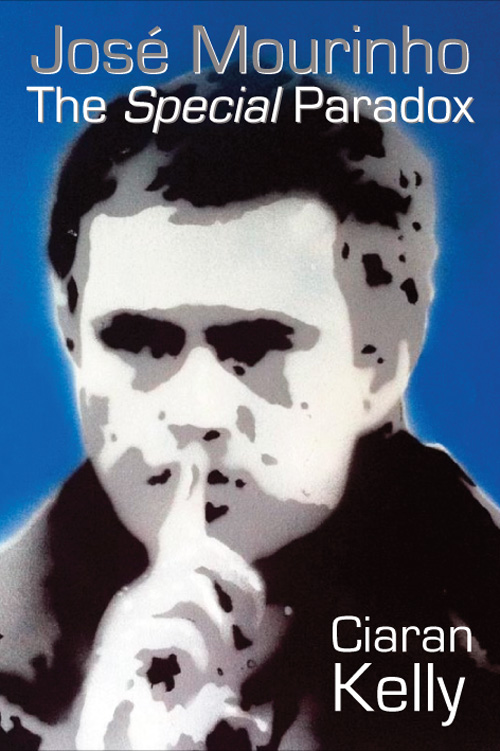 Following on from how he put together his first Kindle, Johan Cruyff: The Total Voetballer, Ciaran Kelly gives us an extract from Chapter Three of his latest Kindle, José Mourinho: The Special Paradox (available from Amazon.co.uk for UK users and Amazon.com for non-UK users).

Never has football seen such an intriguing figure: a man who, psychologically and paradoxically, represents much more than the somewhat lazy, marmite notion of love or hate. José Mourinho is a self-made and self-driven tactical innovator, who, even more so than Arsène Wenger, emerged from relative obscurity and a lack of public notoriety to become football’s first acclaimed postmodern manager and one of the greatest football managers of all-time.

So, while his legacy will undoubtedly be boosted by even more trophy hauls after he enters his managerial peak-aged fiftieth year in January, the Portuguese – like many undoubted managerial trailblazers who have also had inferiority complexes, such as Béla Guttmann (money, after being brought up in poor circumstances), Helenio Herrera (paranoia) and Brian Clough (fatal playing career injury) – has an unsavoury side.

With a career filled with moral nadirs, from the Anders Frisk incident in 2005 to his absurd eye-gouge of Tito ‘Pito’ (Mourinho’s nickname for the new Barcelona manager, translating as penis) Villanova in 2011, Mourinho has stopped at nothing to, arguably and purposefully, become sport’s most controversial figure of the 21st century.

This book aims to differentiate Mourinho’s undoubted achievements as The Special One from his unsavoury controversies as El Gillipollas (the asshole), but, unsurprisingly, they are intertwined and symbiotic, and manifest themselves in global sport’s most conflating individual: The Special Paradox.

Despite winning the Cup Winners’ Cup, the Supercopa de España and the Copa del Rey in 1996–1997, Sir Bobby Robson was moved upstairs by the restless Josep Lluís Núñez to the post of general manager – with Louis van Gaal replacing the Englishman as head coach. Perhaps as a tribute or in the hope of continuity, with Robson’s recommendation, van Gaal retained Mourinho. Interestingly, van Gaal initially planned to use Mourinho for only for a year to help with environmental assimilation, but – with Mourinho proving yet another Barcelona official wrong – he was soon very impressed and, eventually, made Mourinho his official assistant alongside the Dutchman’s long-term ally, Gerard van der Lem. Perhaps the former semi-professional footballer and gymnastics teacher, van Gaal, was as relatable and inspirational (in terms of ruthlessness, decisiveness and authority) to Mourinho as Robson had been.

After all, van Gaal let Mourinho take charge of Barcelona B and Barcelona’s first-team for friendlies; shared insights on his mathematical interpretation of Total Football; and Mourinho certainly learnt more and more about footballers’ psychology in witnessing Rivaldo’s vehement refusal to play on the left wing for van Gaal. Even in his poignant mourning (“I hadn’t spoken to him in the last two months because it was hard for me because I didn’t want to think that he was dying. That wasn’t the image I wanted to keep with me forever…that wasn’t the voice I wanted to hear.”) of Robson after his death on 31 July, 2009, Mourinho was also quick to pay tribute to Van Gaal – “who marked me…we really had a special rapport” – when Internazionale met Bayern Munich in the 2010 Champions League final.

Still, by the age of 36, Mourinho had sought to leave the Camp Nou – with a tangible, but markedly cheaper, managerial offer from Braga and a separate offer to assist Jupp Heynckes at Benfica – but such was Mourinho’s respect for van Gaal, the Dutchman convinced him to stay for, seemingly, the foreseeable future. Little did van Gaal know, though, that it would be his final year at the Camp Nou and after the Dutchman’s dismissal at the end of the trophyless 1999–2000 season – and the uninspiring Serra Ferrer’s appointment that summer – Mourinho felt that he was ready for his first foray into management.

Remarkably, such was Mourinho’s determination, even after Sir Bobby Robson’s offer of a potential long-term handover at Newcastle – once the Englishman had served a further two years and reached his planned retirement age of 69 in 2002 – Mourinho would stick to his word that he would go it alone in football management, rather than becoming an assistant again. First, though, he had to finish the second part, some 12 years later, of his UEFA coaching course in Largs. This time, however, his reputation and confidence preceded him. For example – in a remarkable contrast from 1988 – fellow students, Tosh McKinlay and Garry Bollan, remarked how outspoken and confident Mourinho was.

So, following a very brief spell of near-purposeful unemployment – to spend time with his family, amid the birth of his second child, José Mário, Jr – Mourinho’s opportunity came in September 2000, when Benfica offered him the job for six months (would be extended to two years if the presidential favourite, Joao Vale de Azezvado, won the December elections) to replace Jupp Heynckes. It was a semi-ironic turn of events, with Mourinho having been offered the chance to assist Heynckes only months earlier, and may well have done so but for van Gaal’s fateful intervention before the Dutchman’s eventual sacking at the Camp Nou:

Unsurprisingly, Mourinho had not been able to completely withdraw from football in his short hiatus and such was the importance of this ‘break’, he even devised his top-secret (Mourinho has vowed to only show it to José Jr., if he ever wishes to see it when he is older) Microsoft Word document, the Mourinho Bible, which has proved a crucial and universal thesis to his methods’ evolvement and success across the continent from 2000–2012. This laid the basis for what would become Mourinho’s near-intangible, azar (fate)-driven ingredients for his undoubted success:

Quality, unity, passion, work methods: there is not just one or two reasons [for success]. When I go to a club, I wear the shirt; I feel the shirt like it’s my first one or my last one. There are a lot of factors and they must work in unison.

Fortunately for Mourinho, the Portuguese league at the time was about to become one of the trailblazers in football management for the postmodern manager (without, yet, even mentioning his techniques revolutionary); that is, one who was not an ex-player of the club he managed or had not played football at a high level (the likes of Fernando Santos at Porto, Manuel Cajuda at Braga, Nelo Vingada at Marítimo and Luís Campos at Gil Vicente). Still, to appease somewhat sceptical fans – because of his Porto previous and an absence of managerial experience, but his crucial appreciation of the role of assistant from his time with Robson and van Gaal – Mourinho devised a future coaching hallmark: the ‘Clarke role’. At Benfica, this crystallised in the recruitment of ex-Benfica defender, Carlos Mozer, as his assistant.

This was a key appointment as Mourinho needed all the support he could get as Azevado – who resembled Barcelona’s then notorious president, Núñez, for his lack of affection for football matters – afforded Mourinho a shoestring budget and wanted him to build a team around Academy players (the likes of Diogo Luis, Geraldo and Nuno Abreu) promoted from Benfica’s B team. So, even though Mourinho could still call upon the likes of the late Robert Enke (would go on to describe Mourinho as “the best coach in my career” despite such a short spell under his tutelage), Fernando Meira (legacy lived on in Mourinho’s brave conversion of the Portuguese from a central midfielder into a central defender), Karel Poborský and Pierre van Hooijdonk, he thrived on the limitations.

After all, Mourinho brought a new level of intensity to Benfica, with mandatory shinpads (such was the remarkable laxness under Heynckes and the German’s predecessors), the reduction of training pitch sizes and detailed analysis of opponents. From this, given that he took over in September after pre-season, Mourinho performed well in his short spell: defeating Sporting Lisbon 3–0 (he brilliantly motivated the Benfica players by mentioning that the Sporting players were attending the Portuguese Tennis Masters two nights previously) in the Derby de Lisboa on 3 December, for example. Clearly, a result like this was owed – heavily accentuated by Benfica’s poor opposition scouting department, due to Azezvado’s cutbacks – to Mourinho’s meticulous analysis and it was no surprise that Mourinho spent three days in a personal ritui before his official unveiling, with near-endless video analysis of his squad and future opponents.

However, while Mourinho was clearly making progress for Benfica, let alone himself, the abrasive and out of touch Azezvado’s popularity was dwindling dramatically behind the scenes.

One thought on “Exclusive extract of José Mourinho: The Special Paradox”