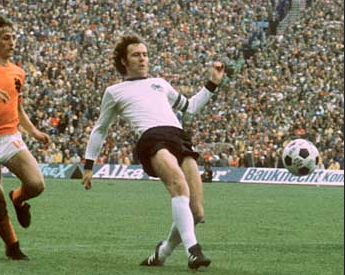 That crunching challenge. That towering header. That crucial block. That incredible skill culminating in an overhead kick into the roof of the net. Though the first three actions seem most plausible, the final action perhaps asks too much of a centre back. Or does it?

When looking at this evolution, particularly over the last twenty years or so, it is important to look at how styles of play have changed to fit the modern game. Increased importance has been placed on the conditioning of player, that extra yard of pace and ability of movement off the ball. It’s also a difference in treatment of players by match officials. Gone are the days of Norman Hunter clattering through the back of a spring-heeled winger (earning a new contract in the process), or an imperious header from Ron Yeats, flattening the striker in the process. Central defenders have to be more tactically astute.

Even looking back nearly twenty years to the first Premier League season there are differences. Manchester United had kept 18 clean sheets with the partnership of Steve Bruce and Gary Pallister. Though both excellent centre backs in their heyday, if those players were brought forward twenty years to cope with the pace of Aguero and Defoe, not to mention the physical prowess of Dzeko and movement off the ball of Van Persie, it would be interesting to see if they could maintain the same sort of form. The early nineties also saw the monolithic figure of Ronald Koeman spreading 60 yard passes over the green grass of the Nou Camp. Would his lack of pace be exploited by the world’s top strikers?

Fast forward to the class of 2012. With the European Championships looming, Carlos Puyol looks for yet another prize to add to his burgeoning trophy cabinet. A defender who has a bit of trickery, can play from the back along with Pique at Barcelona, he has been a player who has been swept up in this evolution. As a footballing hero of mine, Tony Adams would be of the old guard. A natural organiser, with enough finesse to get by. As soon as Arsene Wenger took the helm of the Gunners, a new diet and training regime came into force, a ‘football science’ which was missing under George Graham’s reign. Adams soon was able to finally touch his toes, something which although seemingly void of any significance, signalled a progression in the way in which Arsenal played, starting at the back. The iconic goal against Everton on the final day of the 1997/1998 season will love long in the memory, his finish for the final fourth goal set up by a sweeping ball by Steve Bould (of course) to Adams who rifled it past the keeper.

Four years later, an acrobatic goal from Edmilson against Costa Rica for Brazil in the 2002 World Cup. A centre back. Arsenal’s back two of Mertesacker, more of the old guard, and Vermaelen, the evolution, is an interesting blend. Vermaelen is a centre back who was free-scoring centre back at the start of his Arsenal career, yet still had the ability to keep pace with the league’s top strikers. Where the line is drawn perhaps is the figure of David Luiz for Chelsea. A defender, on various occasions, has been seen marauding up the field, using a interesting piece of skill before sending through a concise through ball. Then the opposition manage to clear the ball, breakaway and score. Some defenders of the evolution have lost some of the more important genetic material which were the tenets of central defending; the ability to defend itself.

Football’s progression from its inception by the FA in 1863 is nothing short of astounding, its influence percolating every inch of society. The players upon its world stage have become iconic, worshipped for their flair and skill. This includes the saviour of what was the West German national team; Der Kaiser, Franz Beckenbauer. Perhaps the archetypal sweeper, his ability as both a reader of the game, an attacking threat and a captain hasn’t been bettered from a German perspective.

Though centre-backs came and went, ab und zu, Franz seems to stand alone as the figure that negates this question of this ‘evolution’. He had already evolved. Voted third in the best players of the century behind Pele and Cruyff, the latter whom he subdued during the battle between his West Germany and Cruyff’s Total Football in his 1974 World Cup win, as well as leading his country to victory in Italia ’90, there have been few who could hold a candle to him and few who ever will. He was der Ewig; a footballer for the ages.

One thought on “Evolution of the central defender: Back to the half”