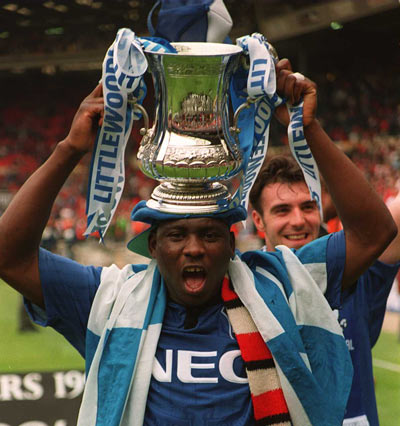 The blue half of Merseyside has a strong affiliation with the world’s most famous old cup. Winners five times and runners-up eight may not make them the competitions most decorated club but interestingly they have won more FA Cup matches and progressed through more rounds than any other club in the competitions 141 year history. The turn of the year has brought an undeniable upturn in the Toffee’s fortunes. The apparent stagnation of the club both on and off the pitch fostering mutterings of disillusionment from the Everton faithful have been replaced by a tangibly more positive atmosphere inside Goodison Park.

Shrewd January transfer dealings have seen a surge up the league and an FA Cup run all orchestrated by the sound skills of David Moyes fresh from celebrating his tenth year at the helm. Contrast this to the dire form their bitter rivals Liverpool have shown since the turn of the year and Everton have good reason to be confident ahead of Saturday’s Wembley clash. As they go in search of a magnificent and particularly sweet seventh success, Everton may be further buoyed by their remarkable running record of six straight FA Cup semi-final victories.

Arsenal’s famous old Highbury stadium was the venue for Everton’s 1984 triumph over fellow Division 1 counterparts Southampton. A Howard Kendall led Everton secured a place in their first FA Cup final since 1968 with a solitary Adrian Heath header deep into extra-time. Peter Reid delivered a cross knocked down by the head of old fashioned centre-half Derek Mountfield into the path of Heath who duly dispatched sending a sun-kissed and Evertonian North Bank into rapture. Everton would go onto Wembley success beating Elton John’s Watford 2-0.

Twelve months on from the triumph over the Saints, Everton once again reached the FA Cup semi-final this time staged at Villa Park. Everton fell behind on thirty-seven minutes to a spectacular Ricky Hill strike from the edge of the area which flew past Neville Southall and in off the post. Unlike the carpet-esque surface of today the match was played on a mire of a pitch. It probably helped Luton nullify Everton’s midfield passing game but after steely resolve the Hatters were to be denied in the final five minutes of the game. Kevin Sheedy lined up a free-kick on the edge of the area “is Sheedy gonna curl one,” asked John Motson but instead he drove one, right into the bottom corner. Everton secured their place in a second consecutive Wembley final with another Kevin Sheedy free-kick dispatched by a towering header from that man again Derek Mountfield. Everton were to be eventual runners-up losing to Big Ron’s Manchester United in the final.

A hat-trick of consecutive semi-final victories was sealed for the second year running at Villa Park in what was a glorious period in the Toffeemen’s history securing league titles in both ‘85 and ‘87. On a marginally better Villa Park surface Alan Harper gave Everton the lead only to be cancelled out three minutes later by Wednesday’s Carl Shutt. For the third consecutive year Everton clinched victory in extra-time on this occasion through a trademark Graeme Sharp volley. The final was Merseyside final between League Champion’s Liverpool and Runners-up Everton with Liverpool securing the double with an Ian Rush spearheaded 3-1 win.

Of course there is only one semi-final anyone truly remembers from 1989 and it involved Everton’s Merseyside rivals Liverpool. 96 fans were tragically killed after overcrowding on the Hillsborough terraces in Liverpool’s semi against Nottingham Forest. It was a desperately sad afternoon which changed British football forever and united Merseyside in grief. Yet there was obviously a second semi-final, albeit overshadowed by events in Sheffield, at Villa Park in which Everton secured their fourth Wembley appearance in six years through a scrappy first half strike from Pat Nevin after Kevin Sheedy had hit the post. The final was an emotional an exciting Merseyside affair with Liverpool condemning Everton to their third straight final defeat.

Elland Road was the venue for Everton’s surprise semi-final rout of Jurgen Klinsmann’s Spurs. Klinsmen would eventually reach Wembley a year later with Germany at Euro 96 but on this occasion was denied by an inspired Everton performance. Leeds born Matt Jackson opened the scoring in his hometown with a near post header, before Graeme Stuart extended the Toffee’s lead in the second half. A Klinsmann penalty put Tottenham back in the game but sub Daniel Amokachi scored two of his ten Everton goals the second of which set-up by the late Gary Ablett. Joe Royle’s un-fancied side defeated League Champions Manchester United 1-0 in a repeat of the final ten years earlier. Neville Southall who had kept a clean sheet in the 1984 final was still a figure of solidarity eleven years on.

2009: Everton 0 – 0 Manchester United (Everton win on penalties)
For the second season running the semi-finals were staged at Wembley with Everton facing a Manchester United in search of all four major honours. 120 minutes could not separate the two clubs as the match went to a penalty shoot-out. Misses from Dimitar Berbatov and Rio Ferdinand allowed Phil Jagielka to seize the spotlight with an expertly dispatched winning penalty as Everton once again upset their North-west neighbours at the National stadium. However, for the fourth time in six finals Everton were to be greeted at the top of the Wembley steps by runner-up medals as they lost 2-1 to Chelsea despite Louis Saha giving them a lead inside 25 seconds.

One thought on “Everton searching for semi-final seventh heaven”