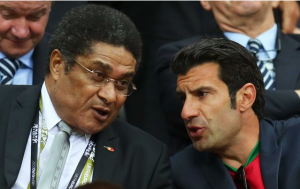 Paul McGrath’s shirt adorns the wall in his home alongside those of Cruyff, Pele, Best and Charlton. Upon learning of the passing of the footballing icon, McGrath tweeted “RIP Eusebio, when greats were great.” The death of the Black Pearl raises memories of Eusebio’s special affection for Ireland and particularly our own Black Pearl of Inchicore.

In 1995, the Benfica legend was presented with the International Award at the FAI annual ceremony. Earlier that year, Jack Charlton’s Ireland had humbled Portugal at a pulsating Lansdowne Road when a Baia own goal sealed a 1-0 win.

In the belly of the old Dublin venue, a member of the visiting party sought out the Republic’s No 5 to ask for his jersey. Eusebio had requested the momento from Paul McGrath and the Irish giant was honoured to oblige.

There’s also a shirt in Eusebio’s house belonging to Roy Keane, garnered after the Irish captain’s phenomenal performance against Portugal on the way to qualification for the 2002 World Cup. Eusebio was in Dublin for the game, a trip he had come to make frequently to a country that had grown in his affection.

“I have always been keen on the Irish just like they seem to have liked Eusebio,” he said ahead of Ireland’s play-off with Iran in 2001.

The debate has raged about who was the greatest player in history, Pelé or Maradona. The men themselves have squabbled over their place in the rankings but for many, third on the list was undoubtedly Eusebio.

Known as the Black Panther or the Black Pearl, Eusebio scored 41 goals in 64 international games. Having grown up in Mozambique until his late teens, he made his name at Benfica where he netted an astonishing 727 goals in 715 appearances. Eusebio spent 13 seasons in Lisbon, where he won seven championships, was Portugal’s leading scorer from 1964-68 and was instrumental in the club claiming the 1962 European Cup. His statue now stands outside the Estádio da Luz.

His nine goals for Portugal in the 1966 World Cup earned him the Golden Boot, four coming in the 5-3 quarter-final win against North Korea. Eusebio’s final goal for his country came against Northern Ireland in Coventry in 1973 in a game that also featured George Best, two of the sport’s biggest icons on the same pitch.

Upon hearing of his death Luis Figo tweeted: “The king! Great loss for all of us! The greatest!”

Speaking in Dublin 2001, Eusebio gave his own thoughts on greatness when voicing his admiration for Roy Keane.

“Today’s great players are not just in it for the money. They too play with heart. That is what makes someone like Roy Keane great. That is why he is captain of Manchester United and Ireland. It’s because he does everything with passion and because he gives 110 per cent, he carries the respect of a true captain.”

McGrath and Keane, Ireland’s contenders for greatness, would echo those sentiments about Eusebio. RIP