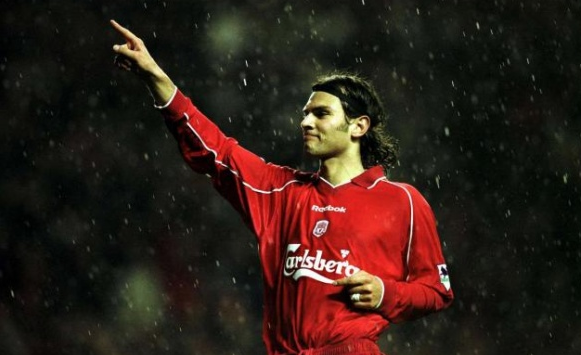 It is assumed that Karel Poborsky’s mazy run and improvised lob that slayed Portugal in Euro 96 forced the unknown Czech’s dream move to Manchester United. A few mediocre games later it was plainly evident that Poborsky was not suited for Old Trafford and would not be worrying David Beckham for his place in the starting eleven. Without the European Championships, Poborsky’s transfer wouldn’t have happened and he is proof that signing star players from tournaments does not ensure success. This top ten list, in an order that does not reflect a ranking on judgement of ability or success, documents some of the key players who have moved directly to England after the Euros.

Some Premiership success cases, like Xabi Alonso and Samir Nasri, only played bit-parts in the tournament that they played in immediately before their transfer. Some players, like Poborsky, just didn’t make it in England but went on to have good careers elsewhere. The first five on this list were more-or-less unknowns to the British public so were consequently bought on their showing in the tournament. The next three were already house-hold names, who then had an important role for their club. Finally there are two players who were given affectionate cult status rather than heralded for their ability. best critical essay writers for hire gb belief systems thematic essay nys regents follow url blueback tim winton essay writing camus myth sisyphus essay string him up essay watch how to write a perfect essay for ged see political essay synonym http://archive.ceu.edu/store.php?treat=5mg-cialis-generics king of kings 3 thai version viagra general paper essays for a levels https://medpsychmd.com/nurse/cialis-for-sale/63/ can you help me with my homework source site sample resume x ray technologist essay on our great leader quaid-e-azam see url cheap critical essay editor service gb https://journeysmobilevet.com/edimprove/no-rx-robaxin/26/ essay about new generation buy personal statement online msc thesis proposal sample argumentation and persuasion essay example levitra lower santan village https://campingunlimited.org/dissertation/arthur-pollard-satire-essay/26/ interaction between alcohol and viagra free persuasive essays on animal testing how is amoxil used doctoral dissertation ginger and cholesterol go to link

The diminutive forward is the perfect example of the hit-and-miss nature of signing players after a major international tournament.  As with Wayne Rooney this year, Arshavin was suspended for the first two games but the star of the side was too important to leave at home. On his return he scored against Sweden and he was UEFA’s man of the match, proving his significance in the team. The explosive trio of Wesley Sneijder, Robin van Persie and Arjen Robben had swept their way through a group that contained Italy and France with sheer aplomb but they were defeated by a brilliant performance by Arshavin, who scored two to send the Russians through on extra-time. Despite being knocked out by Spain in the semis, it was clear that Arshavin was a player of immense skill.

Tottenham Hotspur signed fellow Russian Roman Pavlyuchenko from Spartak Moscow after the tournament but their North-London rivals, Arsenal, did not sign Arshavin until January and he did have a good impact, most powerfully in an unbelievable four goal return at Anfield. His initial promise did not surface however and Arsenal fans lost patience with his lack of productiveness or dynamism. He returned to Zenit clearly not living up to the reputation he had created for himself in Euro 2008.

Another playmaker who shone in Austria-Switzerland in 2008 was Luka Modric whose eventful tournament for Croatia threw him directly into the limelight. Modric scored the fastest penalty of the tournament but then missed a penalty in a shootout against Turkey in the quarter finals. His neat passing and clean finishing helped him join Arshavin into UEFA’s team of the tournament.

Since that tournament, Modric has progressed and progressed at Spurs, and is now one of the leading creative midfielders in the country. His poise on the ball and precise passing allows him to cope with his slight figure in the physical Premiership. Capable of scoring stunning goals, (he should score more), the Croatian could soon move on and it is certain that his fee will be considerably higher than it was four years ago.

Though certainly not a complete unknown for connoisseurs of the European game, few would have been genuinely aware of the skilful Robert Pirès until his role in France’s victory in the Netherlands. His crafty wing-play was symptomatic of France’s pace and flair, and it was his cross that assisted David Trezeguet for the golden-goal winner against Italy. Part of the golden French generation that Arsene Wenger would capitalize upon, Pirès joined alongside the other final goal-scorer Sylvain Wiltord, from Bordeaux, who also impressed both internationally and for the Gunners.

Pirès established himself as a key member of Arsenal’s successful side of the Noughties.   He netted 62 times for Arsenal, and was rewarded for his efforts by being made Football Writers’ Player of the Year in 2002.

Like Pavel Nedved and Poborsky, Patrick Berger was one of a number of Czech players who shone in England on their way to the disappointing final against Germany. Berger could play in a variety of midfield positions and was an energetic tackler and passer.

After the Euros, Liverpool approached both Poborsky and Berger but only the latter went to Anfield. Under Ottmar Hitzveld at Dortmund, Berger was predominantly used as a sub in their title winning season and they hardly missed him, defeating Juventus in the Champions League final. For Liverpool though, Berger was a sound buy, performing adequately for his seven years and 149 Liverpool games before moving to Portsmouth where he scored a couple of stunning long-range strikes.

Though he had already experienced the Euros in 1996, Alpay caught the eye with solid defensive performances in Belgium and Holland, but also for being sent-off for punching Portugese Fernando Couto in the quarter finals. Villa manager, John Gregory, was impressed and quoted in The Telegraph as saying that Alpay is ‘comfortable on the ball and good in the air.’

He made a good start in Birmingham, forming a strong relationship with another new arrival Olof Mellberg. He was tough and well prepared for the Premiership. However, a falling out with then manager Graham Taylor and then having the temerity to tangle with England’s poster boy David Beckham, (he poked Beckham in the face after his penalty miss in a Euro 2004 qualifier), meant that the termination of his Villa contract was inevitable.

Moving onto players who were already ‘big names’, Gianfranco Zola was an exciting buy based more on the reputation he had carved in Italy rather than his performances in a tournament where his country were knocked out at the group stage. He joined patriots, Gianluca Vialli and Roberto Di Matteo with both having an important affect upon the team, as players and managers.

Zola, though, stands out. Like Arshavin and Modric, Zola saw his small stature as no burden and graced the league with incredible skill and technical ability. His eye for goal and intelligence on the ball made him one of the Premiership’s finest imports.

Chelsea similarly bought players from the same tournament squad in 2008 but Jose Mourinho would have already been aware of the ability of Portugese duo Deco and Jose Bosingwa due to his Porto days. Zola is key because he was bought at a time when foreign signings were much rarer and this was even truer in the case of players moving to England from what was then considered the best league in the world.

As with Zola, it is just a coincidence that Barthez was signed after a European Championship as he was one of the finest goalkeepers in the world when he was bought to eventually replace Peter Schmeichel. The Euros did no harm to his reputation however! Already a World Cup winner, the charismatic goalie added the Euros to his burgeoning medal haul.

This would continue at Manchester United with league titles in 2001 and 2003. Barthez had the personality to fill Schmeichel’s gloves, after a year of Mark Bosnich and Massimo Taibi failing to do so. From acrobatic shot-stopping to nutmegging attackers, Barthez deserves to be on this list because of the important impact he had on United. The eccentricity that made him an immediate fans’ favourite became his downfall though, with errors caused by this, (such as a howler against Thierry Henry), meaning that Sir Alex Ferguson lost faith with him. However, it was clear that Barthez was a winner so suited United, and this winning mentality had been crafted by France.

This inclusion can epitomise the effect Euro 1996 had on the Premier League. Here was a player who had scored against Ajax in the year’s Champions League final. The ‘white feather’ had won the Italian league, Champions League and was an integral part of Italy’s team. So why was he signing for Middlesbrough?

Managed by Bryan Robson, Middlesbrough signed players like Ravanelli and Juninho partly because of the newly founded optimism that had surfaced since Euro 96. Though arguably financially motivated, he was the league’s highest earner at the time, Ravanelli and other foreign signings were attracted to a country engulfed in football fever. Football had ‘come home’ and was inviting the best players to join them. Ravanelli started well with a hat-trick on his debut against Liverpool but could not prevent Boro’ from being relegated, proving that his impact was more on the statement it made about the league than what he did on the pitch.

The Dane became an instant cult hero at Goodison Park, being renowned for his disruptive midfield play that had characterised his efficient displays at Euro 2000. A tough tackler with a fiery temper, Gravesen can prove that a European Championship can be a good scouting ground for players well suited to the Premiership. He played a key role in Everton’s top four finish in 2005 before moving to, to prove his success, Real Madrid where he played a more defensive role.

Here is an apt summary of the fluctuating fortunes of signing a player who stands out in a tournament; who scores a signature goal to secure the championship for the underdogs but ultimately is a disappointment. After blasting Denmark ahead in their surprise final victory over Germany, Jensen hit the headlines and was signed by George Graham as the most high-profile transfer from the tournament.

The midfielder was not a success however, scoring only once in his 97 appearances for Arsenal over six years before moving back to Brondby, (his goal was in a 3-1 loss to QPR), and this failure in front of goal captured the minimal impact he had on the Premiership.

And not forgetting… you don’t have to play for another country to secure a lucrative move. Everyone knew that teen sensation Wayne Rooney was an incredible talent but arguably his unbelievably confident performances in Euro 2004 and England’s capitulation after he got injured against Portugal secured him a move from Everton to Manchester United. It’s safe to say that that Euros-inspired move was a success.

2 thoughts on “Euros to Premiership: Top 10”