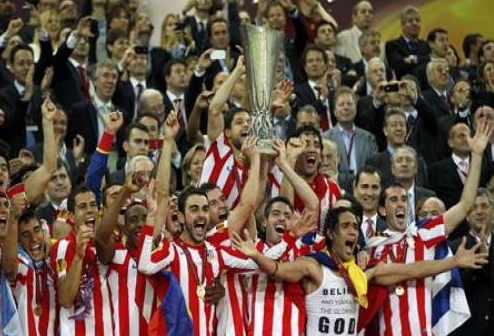 Atletico Madrid lifted the Europa League for the second time in three years thanks to a superb Radamel Falcao double and a late Diego strike to defeat Athletic Bilbao 3-0 in Bucharest. Declan Olley gives his observations of the Europa League final…

The Tiger outshines the Lion

Falcao’s second, meanwhile, highlighted both the ex-Porto player’s intelligence and deadliness. Having appeared to have lost the opportunity to pull the trigger, the number nine cleverly span away from Athletic’s Aurtenexte using a backheeled Cryuff turn and smashed the ball past Iraizoz.

It was, however, a different story for Fernando Llorente – nicknamed The Lion King. The Spanish striker was given scraps to feed on and came up against a well-organised Atleti backline.

The 6ft 5in man had his best chance in the 19th minute when a flighted ball from Athletic’s right saw him snatch at the volley, sending the ball harmlessly past Thibaut Courtois’s post.

The evening was an unfair reflection on the 27-year-old, who has been fundamental in Athletic’s Europa League campaign having scored seven goals in the competition.

As for Falcao, his goals ensured he picked up the Europa League trophy for a second season running having lifted the cup last year with FC Porto. It also took his record in the competition to 29 goals in 29 games.

And, although the 26-year-old only joined the Rojiblancos last summer for €40 million, the club could look to cash in on the striker with their account’s showing a staggering €115 million owed to the taxman.

Atleti manager Diego Simeone said of Falcao’s future: “Of course I hope he will stay with us but I’ll be happy with whatever he feels to should do because I’m very fond of him.”

Win caps off great turn around by Simeone

Diego Simeone took over from Gregorio Manzano in December and his Europa League victory signals a fantastic five months in charge at the club he once played for.

The Argentine has guided Atleti to fifth in the table, two points off of the fourth and final Champions League place with one game remaining. Not bad, considering the Rojiblancos were languishing in the bottom-half of the table.

And the 42-year-old’s tactics and coaching style in Bucharest on Wednesday night highlighted exactly why Atleti’s fortunes have changed since he tookover.

A game plan based upon counter-attacking, Simeone has practically divided his team up into six and a deadly foursome of Falcao, Arda Turan, Adrain Lopez and Diego to soak team’s and unleash devastating attacks.

They are happy to surrender possession in the knowledge that their defensive unit – so well-organised against Athletic on Wednesday – can provide a base for quick, turnover football.

And it was that that made the difference against Marcelo Bielsa’s side. In Diego Godin and Miranda, Atleti had two centre-backs who were prepared to ruffle the mane of The Lion King.

Whilst in Gabi and Mario Suarez – who were absolutely outstanding in the centre of midfield – broke up Athletic’s attacks early and were able to keep possession of the ball when it was needed most.

Athletic architects of their own downfall

“Our opponents deserved to win, although I don’t think the basic difference between the two teams is as vast as what happened out there on the pitch made it appear. We just played into their hands and let them impose their style of play on the game.”

It was an honest assessment from Athletic coach Marcelo Bielsa and much of what the Basque side did during the 90 minutes rarely came off.

Within the opening 10 minutes the centre-back pairing of Javi Martinez and Fernando Amorebieta failed to settle. And it disrupted Athletic, who insist on starting attacks from defence, immediately.

Falcao’s two goals, which were so crucial to events, could have been prevented too. Left-back Aurtenexte was at fault for the Colombian’s opener; he jogged back into a position that was far too away from Falcao and gave the deadly number nine the gap he needed to get his shot away. It was no wonder the Athletic defender was hauled off at half-time.

As for the second, Amorebieta – insistent on playing out from the back – gave the ball away in a dangerous area which saw Turan’s cross taken under control by Falcao and dispatched past Iraizoz. The 27-year-old will still be wondering why he didn’t clear it long?

The Copa del Rey finalists also lacked in attack where their longer passing and killer balls did not match that of their short passing.

The Europa League final was Athletic’s 63rd of the season and with one of the smallest squads in the Spanish game, it was evident that tiredness had played a part in their 3-0 defeat too.

The emotion was there for all to see as Thibaut Courtois sprinted the length of the field to slide in celebration in front of the Atleti fans at the final whistle.

The victory rounded off an impressive debut season in Europe’s top-flight for the Belgium, who was loaned to the Rojiblancos last summer after he had signed for Chelsea.

And his performance on Wednesday night highlighted his credentials not only to be Chelsea’s new number one, but one of the finest goalkeepers of his generation.

For such a mature display in such an important game it will come as a surprise too many that Courtois is just 19-years-old.

In the first-half, the former Genk ‘keeper made a good stop from Iker Muniain, parrying the shot away from danger.
But it was in the second-half when the Belgium-U21 star showed his class.

He was a calming influence on the Atleti backline with his determination to come for crosses – an attribute he will need to survive the rough and tumble of the Premier League. He also denied Markel Susaeta late on with a brave onrushing block.

With Petr Cech entering the twilight of his career, Chelsea certainly have an able successor.

Declan Olley is an aspiring sports journalist who is studying journalism at the University of Kent. With a pen, Declan writes about a wide variety of sports, specialising in football. With a microphone, he is involved in Not Premier League Proven, a football podcast run by six Kent journalism students available on iTunes. For more, you can follow him on Twitter @JournoDec.