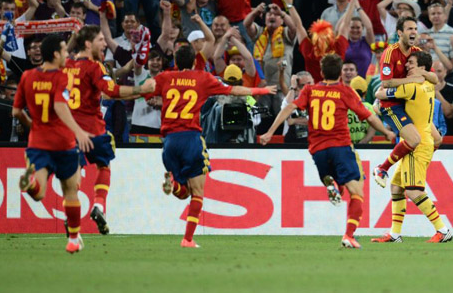 “All they do is pass” say many. “I’d rather watch paint dry'”a few quip. “Boring” has become the general consensus. This is what has become the common perception of a once revered Spanish side.

At Euro 2008, an entire continent was enamoured by the way Xavi, Iniesta et al passed their opponents into submission. Their opponents suffered an execution as beautiful as it was brutal. Tiki-taka was born.

At the World Cup in 2010, it was the turn of the whole world to fall in love with Spain. The passed, they passed, they won. There was a majesty to the way the did things, a certain charm that even the most die hard, old school, ‘in my day you could tackle’ veterans found impossible to resist.

But now, as Spain seek to win an unprecedented third consecutive major tournament? No. It is, as they say in Spanish, aburrido. Dull.

To what can this swing in opinion be attributed?

One possible explanation is a slight tweak to the system. Back in 2008, Luis Aragones’ side had just the one holding midfielder – Marcos Senna – and two strikers: Fernando Torres and David Villa.

Fast forward four years, and in Vicente del Bosque’s team there are two holding players – Xabi Alonso and Sergio Busquets – and, at times, no strikers.

Yet this should pose no problem. Netherland’s Total Football, or totaalvoetbal, in which the roots of tiki-taka are deeply steeped (as Ossie Ardiles notes here), is revered some 40 years on. Their system was none too different, they may have started with a striker, but it was based around players rotating position: the term ‘false 9’ may not have been heard, but nor was there a fixed 9 either.

Spain have taken Total Football, significantly upgraded it (in the words of Raphael Honigstein), and did something Holland never could: won trophies.

Perhaps therein lies the problem. They’ve become the number one side in the world, the envy of all other nations. In order to claim something back, they are dismissed as arrogant, their style as dull.

You hear of it happening in various circles. A band you love but no one knows about suddenly goes mainstream, and to you they’ve sold out, you don’t listen to them anymore. Spain are that band.

In other sports too, it is common. Everyone bemoaned Tiger Woods ‘winning everything’; Andre Agassi was more popular than the more successful Pete Sampras; no one liked the Australian cricket team that left a trail of destruction wherever it went.

A third and final reason behind the ‘boring’ tag is because of the way other teams play against them. Take, for example, France’s tactics in their recent quarter final encounter. They sat back, offered nothing going forward, even put a right back on the right wing – not that it worked.

If you have a Ferrari and I have a small car, the only way I can win is by putting sugar in your petrol tank.

People would do well to recognise the work Spain put in to achieving this style. The meticulous practice, hours of training; honing, developing, striving for perfection.

Perfection has not been achieved. In sport, perfection is an oxymoron. But with a European Championship and a World Cup, this Spanish side has come as close as anybody. Call them boring if you like, but at least applaud them at the same time.

In forty years, people will not look back on this side and think ‘boring’. They’ll probably be wondering why no one liked them.